If you’ve seen my desire to costume, please let me know!  I don’t know if I pinned a note to its shirt, but hopefully it knows where it lives and could be sent to me COD?

I am trying to overcome my TOTAL lack of enthusiasm for costuming.  I did get on a fabric buying spree a few months ago, so that’s something!  I’ve been wanting to make a new dress for Bella Donna, and been wanting red for a while, so about a year or so ago I finally found some that would work:

I still love the fabric, but one of the things I’ve been trying to do as Bella Donna costume maven is to get us to broaden up our color palette.  We originally started with only shades of red (everything from gold through red through burgundy).  It worked great for a common look, but I think non-costumers don’t distinguish as much as costumers do, so we got a lot of, “Why are you all wearing the same dress?”  Hence, my last Venetian was in green.

Well, we got together to talk fabric a few months ago, and I realized that suddenly everyone was going to be back in red shades. I think part of it is what fabrics people got excited about, but also that it’s HARD to find good silk damasks! So I thought I’d better walk the walk and shelve my red (for now) and see what else I could find.

Cue months of fabric shopping, and I FINALLY came up with these, which are both in my hot little hands now: 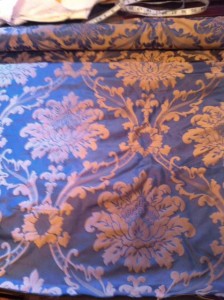 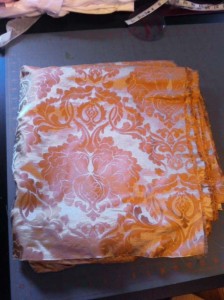 Okay, yes the peach is still in the red family, but at least it’s a lot lighter than red and it’s shiny!

So, now I have to figure out which one to use! For a while I was more excited about the peach just because it’s REALLY SHINY, but now I’m leaning more towards the blue — which is SUCH a coup, as finding blue silk damask that works for costuming?  Shockingly really hard!  And I don’t do baby blue, thank you very much.

I’m still planning to make this dress, including the weird gold shell/flower-y bits: 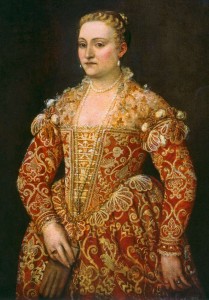 I even found some butt-kickingly good gold lace that will work for the stomacher, which I’m REALLY excited about.

First up will be a new corset, basically a strapless version of my 1780s stays.  I even managed to cut it out and mark the boning channels on Sunday, which is a major accomplishment given my total lack of energy for costuming!  More on that soon.