Just over a week ago was the GBACG Last Dinner on the Titanic. You’ve probably read all about it on other blogs, but just in case…

I wore a “this old thing” that had only been one worn once — my olive green 1910 Lady Maud evening dress. As costumes are wont to do, it had shrunk over the intervening years (I’m convinced there’s something about dark closets that shrink costumes), so I had to let it out a bit.  Of course, I decided to make it harder on myself but not just letting it out but also removing the lining from the overskirt — in my zeal to line everything, I felt like the whole dress hung too heavy for the era, so I took the lining off the overskirt for a hopefully lighter effect. Also, I needed a wider placket in back (that whole shrinking thing), and I had used all the fabric, so I took some fabric off of the underskirt (where it’s hidden under the overskirt) for placket-ing.  I didn’t LOVE altering it, but it didn’t kill me, so that’s something!

My Indian wedding jewelry showed up in plenty of time. Of course, one piece was broken, a drop pearl was missing, and one glass bit needed reglueing — oh, and the whole thing needed a serious wipe down — but that’s par for the course, as far as I’m concerned, when you buy cheap jewelry on ebay.  I have no expectations of perfection when I spend that little money!

I was inspired by the bandeau worn by Perdita Weeks in the recent (very meh) Titanic miniseries, and made one similar with three rows of olive green velvet ribbon. I wanted it to hold its shape without a ton of bobby pins messing up the line, so I sewed the ribbon to some lightweight wire; then I took apart the maang tika (forehead jewel) and used parts of it as decoration on each side of the bandeau.

I was super excited to have both Loren and Jenny-Rose fly in to go to the event! We got dressed at my place — I tried to do something similar to this hairstyle and it worked out relatively well, although the sides got flattened as soon as I put the bandeau on.

The event was at the Bellevue Club in Oakland, which has become my favorite venue and I now think all costume events should be held here.  Yes, it’s expensive, but I’ll pay up!  I have been costumign long enough that I am no longer excited just to get to dress up.  I need value add in the form of a fabulous venue and/or attempts to be in-character/in-period.

Luckily, I was sitting with a group of friends who share my desire to be in-period, so we all chose real people who were on the Titanic to play. I was Miss Madeleine Newell, returning from a trip to Egypt and Palestine with my younger sister Maud (played by Jenny-Rose). We were joined by Miss Edith Russell (a journalist), Lady Duff-Gordon (who designs women’s unmentionables), Mr. Cavendish (of the Devonshire Duchy family!) and his American wife, and two couples whose names I’ve forgotten, but the “wife” of one turned out to be his mistress (which I had no idea!).  Rather shocking!  Luckily, we all have a good time playing characters but are also mellow about it, so we sort of go in and out of character as the mood strikes us — nobody minds if you crack a joke or make a comment as your modern self.  The part that made my toes curl is that the three gentlemen at our table stood up whenever a lady stood, which SO works for me.

The fabulous Richard Man took formal photos, and as always, they turned out fabulous. I’ve heard he’s going to retire from photographing costuming events soon, and I am very sad!  Here’s the best shots he took of me: 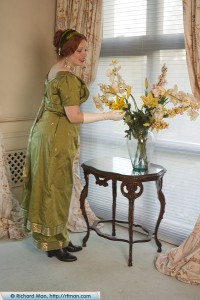 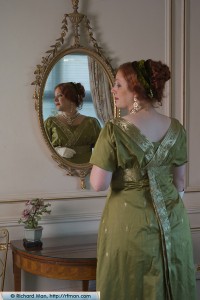 Then there were cocktails in the beautiful Mural Lounge, which has 2 story high ceilings, antique furniture, pink walls, and looks like it stepped out of Versailles.  Dinner was in the main dining room, which is equally stunning and decorated in green. Here’s a shot of the dining room before we sat down to eat: 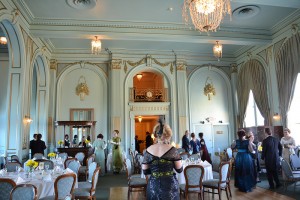 The food was REALLY good, and they had a live band (a quartet I think?) playing music of the era during dinner. Some people got up to dance, but we mostly sat and socialized and ate and drank and laughed!

Here’s my table, minus Jenny-Rose who’s taking the picture! 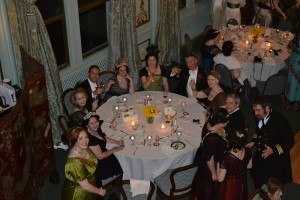 After dinner, there was more dancing, but we retired back to the Mural Lounge to lounge and chat and take photos. Everyone, not just our group, looked amazing — there were so many beautiful dresses (and themes! lots of women in green, and lots in pink/orange/peach) and the gentlemen looked REALLY good.  I’ll tell ya, guys look good in all sorts of historic costume when it’s done right, but NOTHING’s better than a man in a well-tailored suit. 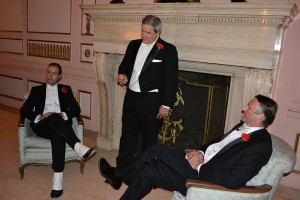 I totally failed to bring my camera, but you can see more pictures here: