Casta paintings are fascinating sources on multiple levels. “Casta” is a Spanish word meaning “race,” “kind,” or “lineage” (“Between ‘Casta’ and ‘Raza'”). It was a term used in 18th century Latin America to refer to a hierarchy of ethnicity, whereby people were categorized based on their ancestry. Different terms were defined not just for people of Native American, Spanish, and African heritage, but also for different mixtures (so, for example, a castizo was the child of one Spanish and one mestizo [one Spanish, one Native American parent] parent).

Spanish culture was so obsessed with this categorization and hierarchy that what scholars call “casta paintings” were popular from the very early 18th century. These paintings depicted a child and two parents, with the racial mixtures and associated terminology clearly noted in inscriptions (“Casta Paintings”). Frequently, there would be a series of multiple paintings (either on the same canvas, or a set of paintings) that illustrated the various ethnic categories. In addition to skin color and hair, social differences were displayed in — you guessed it — dress.

I’ve long found these images fascinating, because in addition to demonstrating this complex and interesting aspect of Spanish/Latin American culture, casta paintings give us a window into 18th century Mexican dress… which turns out to be an interesting hybrid of European and Native American dress.

In this image, the Spanish mother wears a striped pet-en-l’air (a short robe à la française) and petticoat over side hoops. It appears to be embroidered or trimmed, particularly at the hem. Her hair is worn in a net, similar to this Spanish painting of a Maja. All of the men wear standard European shirts, breeches, and jackets. Interestingly, the father has a cap of some kind underneath his broad-brimmed hat. 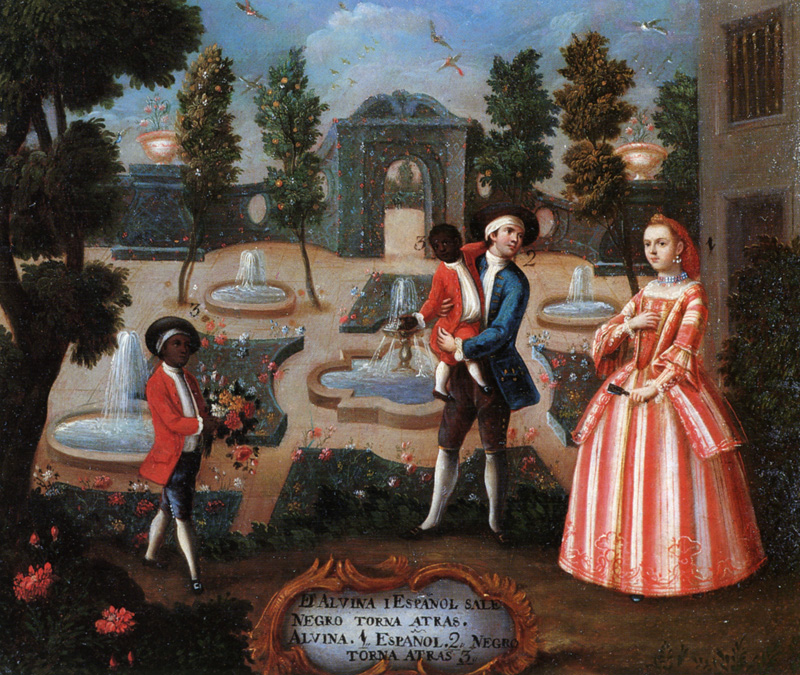 Unpacking the racial mixtures is difficult for me! Here we have a Spanish man and an “Albina,” a woman of Spanish and Morisco (Spanish and Mulatto) — in other words, 1/8 African, 7/8 Spanish), heritage. The Spanish man looks like he would be at home in Europe with his matching suit of coat, waistcoat, and breeches, plus powdered hair or wig (possibly a bagwig?) with buckles (side curls). The Albina woman wears a white jacket tied with blue bows over a matching stomacher, and sheer pleated elbow frills. Her petticoat is black and very full. Her hair may be powdered, and is pulled back tightly with either a cap or net. Note her super-fancy girandole earrings. The child looks to be wearing a red velvet jacket and waistcoat, with blue breeches. I love how the children in these paintings can look like weirdly-sized adults. 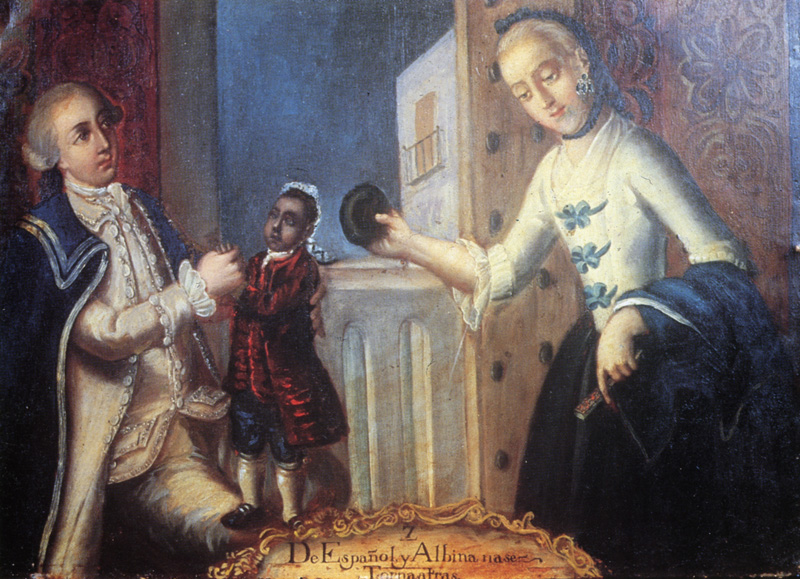 Another Spanish man and Albina woman with their children. Again, the man looks completely European, with his gold-trimmed coat, powdered hair or wig, and cocked hat (tricorn). The woman wears a similar ensemble to the painting above, with a white jacket and black skirt worn over a hoop. She wears a black (lace?) shawl over her hair. The children are both wearing striped tunics, showing a Native influence. The younger child wears a net on his hair (I’m assuming this is a boy, due to the breeches). The elder child’s hair almost looks shaved in a tonsure, but I could be misreading this. 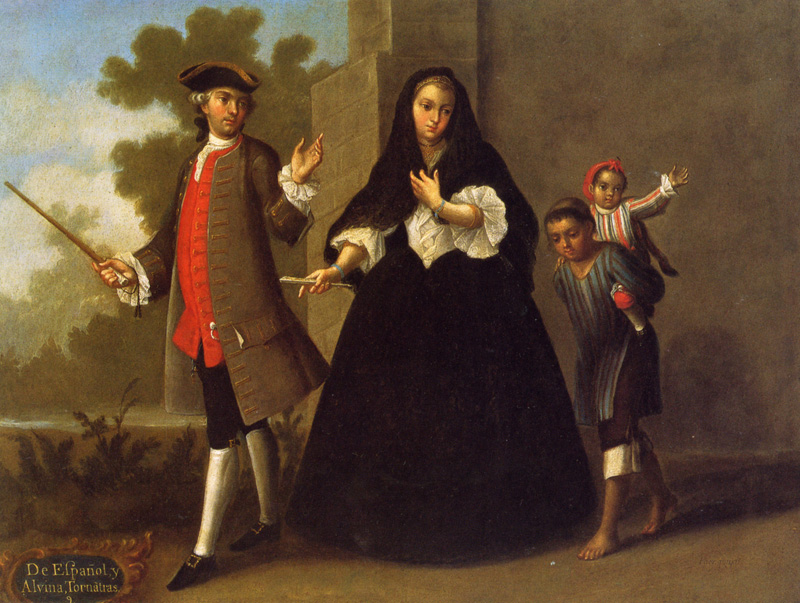 Yet another Spanish man and Albina woman. Her blonde hair is styled very plainly, in contrast to the styles worn in Europe (note that this painting is circa 1780s, so if she were following European hairstyles, she’d have a big, bushy style along these lines). This seems typical of all of the casta paintings. Their child wears a pudding cap. 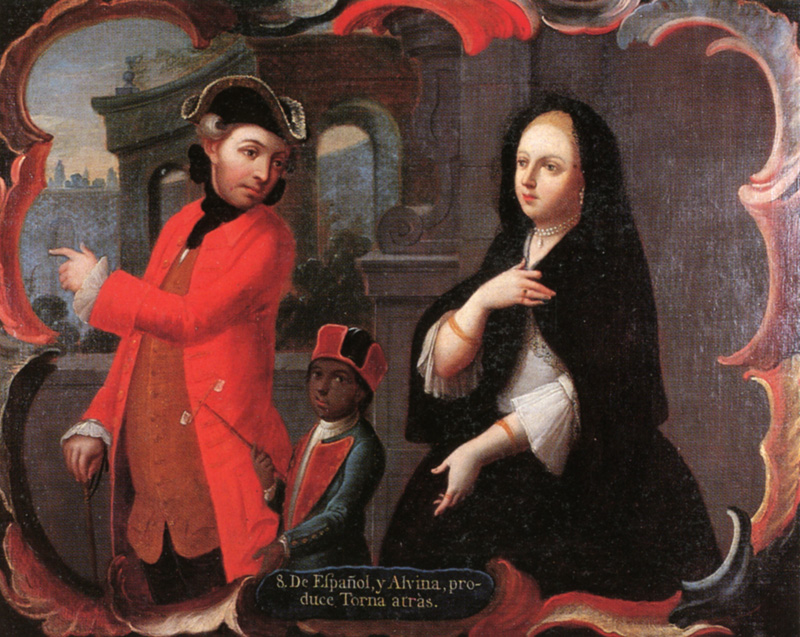 More Spanish man and Albina woman! Her dress appears to be made of a watered silk moire. Notice the large black patch next to her temple. Beauty patches were particularly popular in Spain, and clearly that trend bled over into Mexican styles. Their daughter wears what appears to me to be a white, floral printed gown. 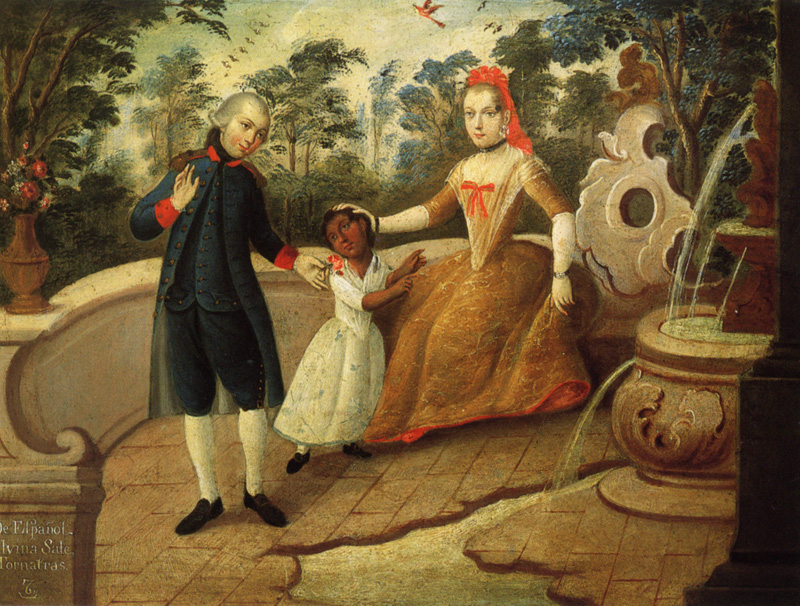 Unfortunately this painting is presented without any information, so I’m unsure of the racial classification. This is one of the more elaborate hairstyles that I’ve seen on a casta painting, but it still doesn’t look anything like what was worn in Europe. Her gown shows a strong Native American influence, both in the woven pattern and the loose fit. Again, she has a black patch at the temple. 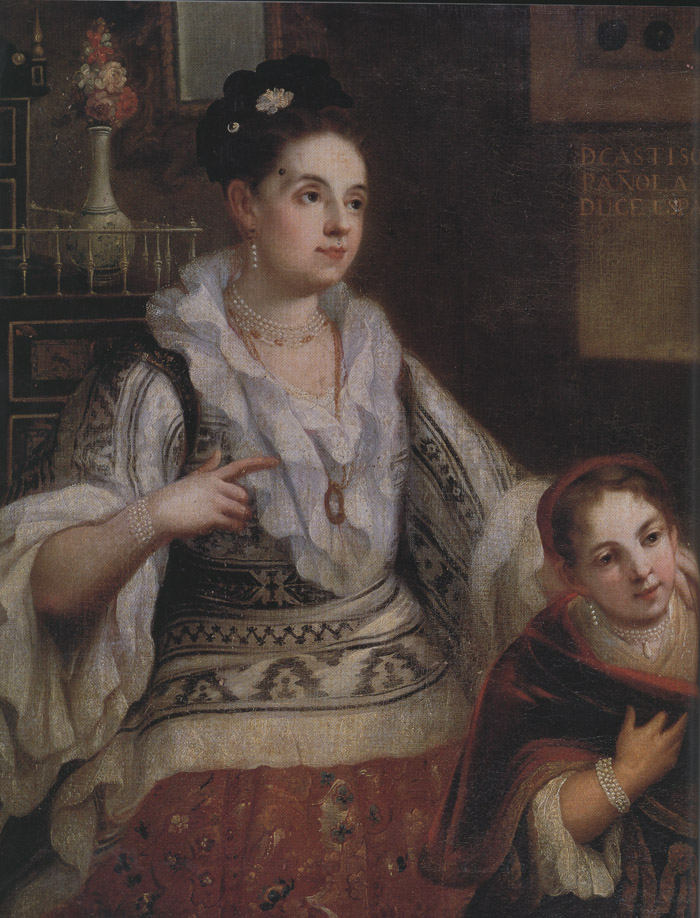 This is one of those series showing “all” of the different racial classifications. There’s too many to look at all of them, but a few highlights:

Two of the ladies wear nets on their hair (#4 [top right] and #5). The more European ensembles are on the Spanish men and women, as well as the Castizo (#3), Mora (#4), Morisco (#6) and Loba (#13). Clearly many of the people are dressed for practical work wear. Notice the huipil, a traditional Native dress, on the India (#7); many of the other women may be wearing it as well. The jacket worn by the Chino (#7) looks very majo to me. Two of the women wear patches on their temples (#6 and #9). 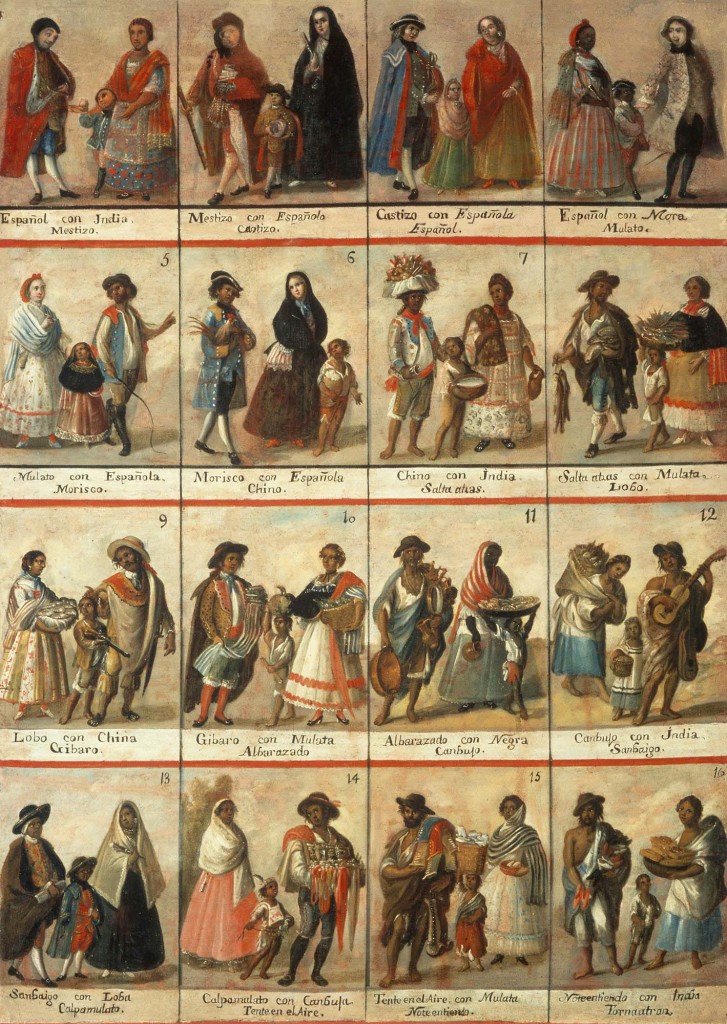 This Spanish man wears a similar cap to the first image. His overtunic is interesting — clearly he wears European dress underneath it. I’m not sure if it’s a feature of Spanish dress or Native American. The Albino lady’s dress is made of a very ornate fabric and is worn over a rounded hoop. 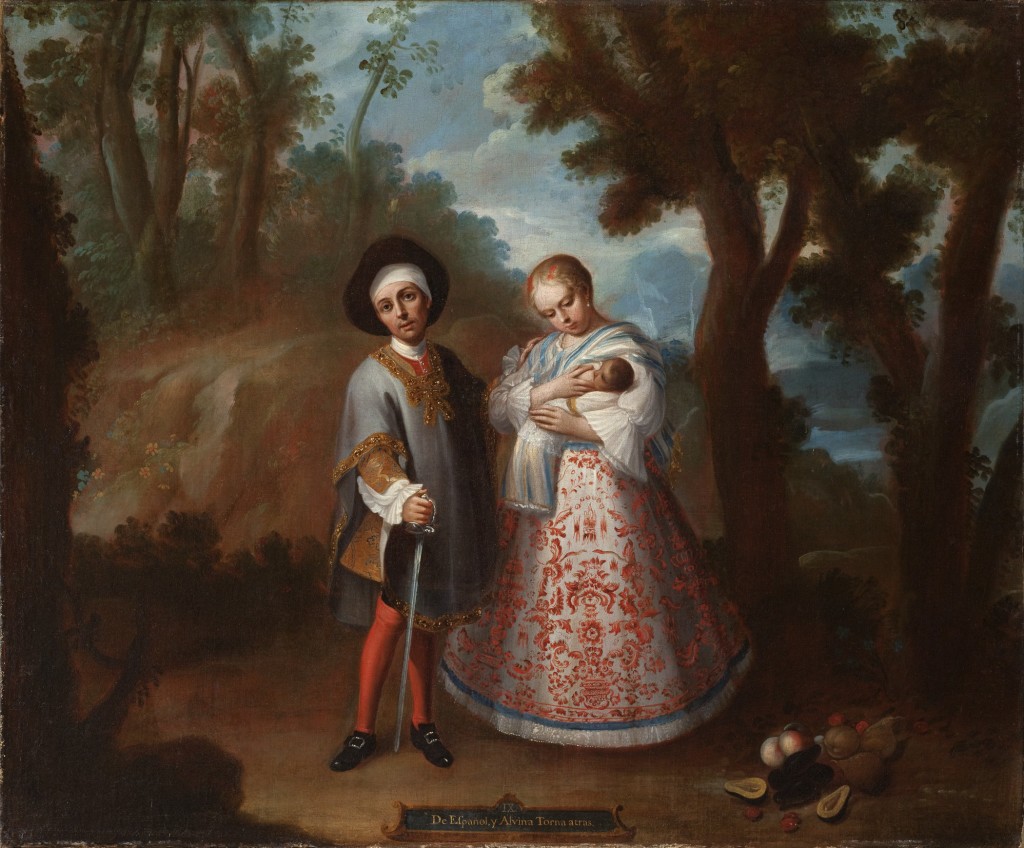 It is interesting to see that this African man is dressed very European, although I don’t know that I’ve ever seen mismatched stockings before! Note child riding a sheep. 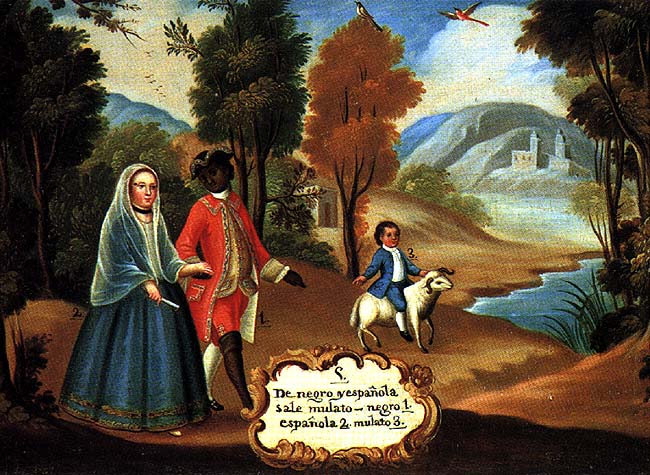 Another of these caps on the Spanish man. The Morisca lady’s dress is made of a stunning brocade or similar fabric. Note the wide gold trim around the hem and the large hoop. 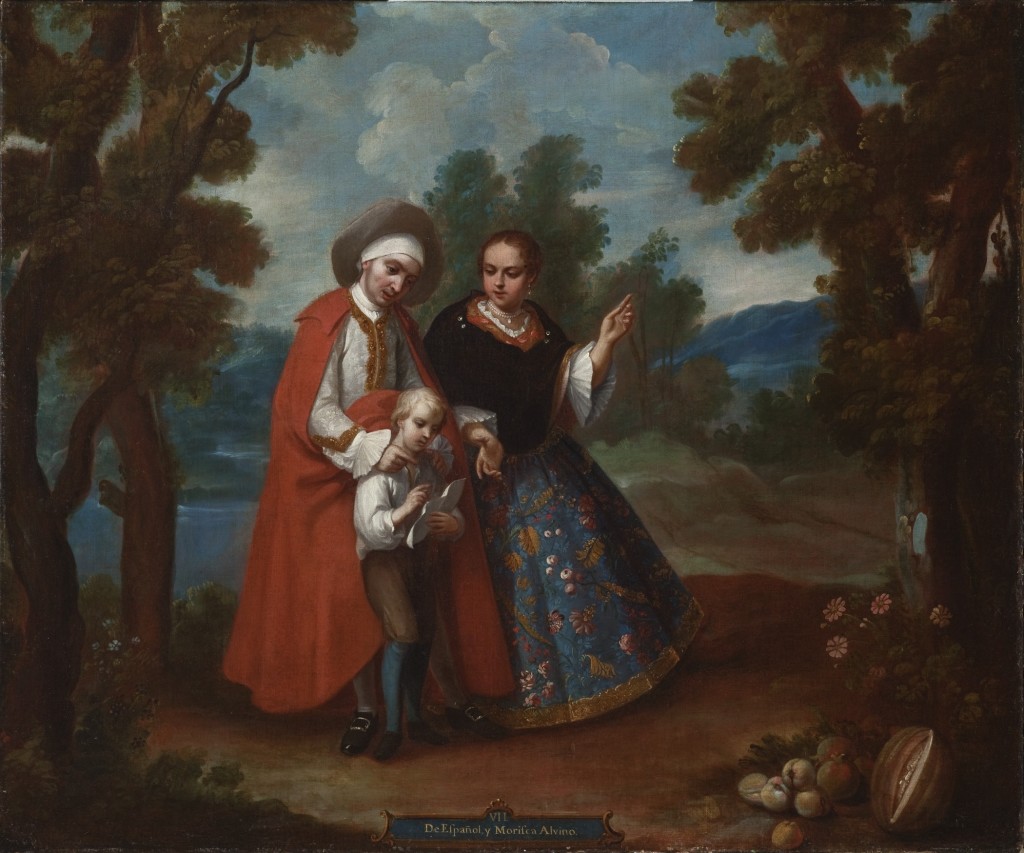 Another over-smock on the Spanish man. The torna atrás (dark-skinned person of 1/16 African, 15/16 Spanish parents) lady’s dress appears to be a cotton print with a wide, sheer flounce around the hem. 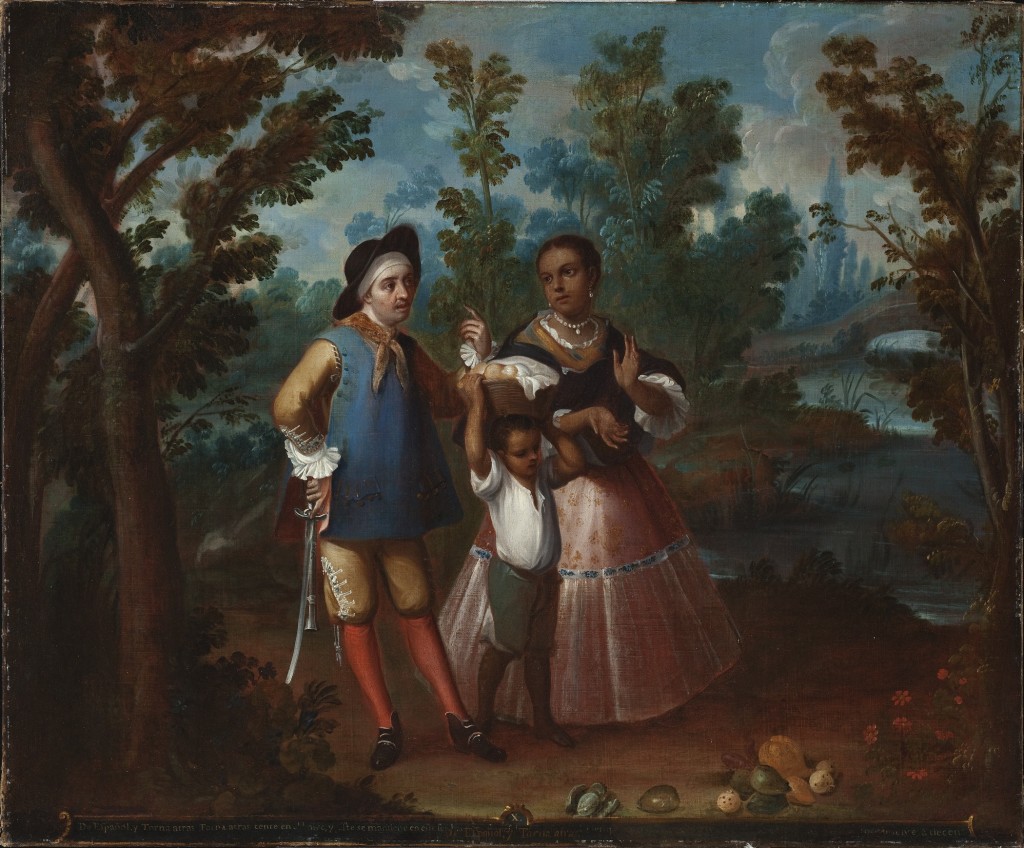 This ensemble is over-the-top stunning, from the elaborate jewelry, fabric and trim to the powdered hair and wide hoops. She is wearing FIVE (count ‘em!) patches on her face.

This dress could be a robe à la française worn retroussée (with the skirts looped up). The fabric is a brocaded stripe, the stomacher is richly embroidered, and she has to-die-for jewelry, including girandole earrings. 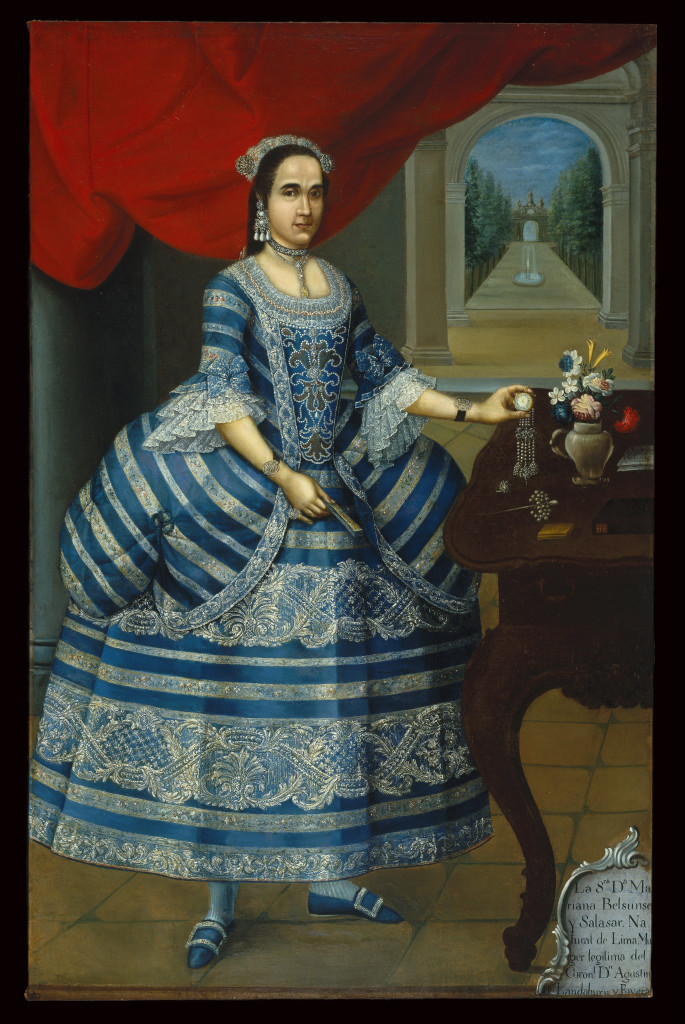 Laura A. Lewis, “Between ‘Casta’ and ‘Raza': The Example of Colonial Mexico,” in Race and Blood in the Iberian World.

Diana DiPaolo Loren, The Archaeology of Clothing and Bodily Adornment in Colonial America.

Costumes at the Château pt. 3: robe a la circassienne!

Bound! The Stays, That Is