Trystan asked a very good question on my last post about court dress:  “A lot of the fashion plates make the skirts look more round than the flat rectangular shape seen in the extant gowns. Is this just artistic license or were there different styles needed different under-structure shapes? Bec. some of them look almost like there’s a round hoop worn under the gown, not side panniers, or maybe some weird cross-breed between the two. Or maybe it’s the same panniers with really fluffy petticoats that round out the look. Or again, artistic license!”

This is a great question, because (besides a shift and stockings), the first thing one needs under a French robe de cour, and many other 18th century court gowns, is a panier or hoop (also called “hoop-petticoat” in English; incidentally, panier translates as “basket”).

So what did French court paniers look like?  Were they different from regular paniers, or paniers worn in other countries? Did sizes and shapes change over time?  I can’t answer all these questions, but I can tell you what I’ve found out so far!

The 18th century hoop was probably invented in England, where there are references as early as 1709 (Chrisman).  They begin appearing in France in about 1718-19.  Initially, it was a rounded dome shape; from 1725-30, it was more shaped like an oval bell with a circumference of about eleven feet.  It was in the 1730s that the fronts and backs flattened to create the shape we think of when we think of the 18th century panier (Boucher).  According to François Boucher, “There were all sorts of paniers:  funnel-shaped paniers à guéridon, dome-shaped paniers à coupole, paniers à bourrelets flaring out at the foot of the gown, paniers à gondoles which made women resemble ‘water-carriers,” and elbow paniers, on which the wearer could rest her elbows, and which the 1729 Mercure describes as being more comfortable than paniers à guéridon.”  Amalia Descalzo writes that the elliptical hoop of the 1730s was called “paniers à coude” or “à commodité (74).  Most historians agree that full paniers (as opposed to the shorter, knee- or thigh-length hoops, or pocket hoops) went out of fashion in the second half of the eighteenth century except for court wear.  In 1765, Diderot’s Encyclopédie wrote that the style of the panier “lasted a long time, and is not yet passed” but was falling from fashion; “One goes today in town & to the theater without panier, & one does not wear them anymore on stage…”; however, the 1785 Encyclopédie Methodique complained in the 1785 that the panier “reigns at the theater, where it is seen in all its ridiculousness on the dancers” (the court gown was frequently worn by actresses and dancers, a fact which surprised me!).

Thus, the main occasion in which French women wore paniers in the second half of the century was for the robe de cour, under which it was required.  Kimberly Chrisman-Campbell writes that the size of the court panier fluctuated with fashion, the rank of the person wearing it, and the solemnity of the occasion.  She argues that in the 1740s, it grew very large following general trends, but stayed enormous when more modest paniers came into fashion.  She cites the grand duchess Maria Feodorovna of Russia, who was presented at Versailles in a panier of six aunes (24 feet or 8 yards); and the Cabinet des Modes (1786), which noted that while large paniers were not frequently worn for fashionable wear, they were worn at court.

The 1785 Encyclopédie Methodique gives the most information about court paniers:

“The English paniers are those that are worn under court ensembles & under theater costumes; they have a height of ¼ ½ or 7/8 [aunes?] and their width is three or four aunes.  They are lined with baleen, and more commonly in cane as it is less heavy.  This cane is a small reed from India that is cut on both sides to make it more square; it is covered with strips of fabric that are sewn to the skirt with which they form the panier.  This skirt is made in taffeta, but ordinarily in toile legere [canvas?].  The English paniers have three coudes [elbows, see below].

“The name coude [elbow] is given to a portion of cane or baleen that is only placed on the side of the skirt, and precisely in the elbow, & which is attached by its two ends, one in front, the other in back, on the first row of canes that entirely circles the panier [in other words, the arching canes on each top corner].”

“There are some paniers à l’Anglaise or paniers de Cour, of a lesser size than those indicated previously; these ones do not have but a row of cane underneath three elbows, the others [the bigger paniers? something else?] have two.

“The name coude is given to a small panier which has no more than two elbows on a sole row of cane that supported and ended the panier; it was the height of fashion, and it is passed now like a thousand other things.” 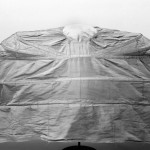 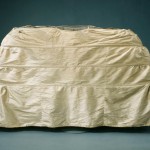 The pattern for Lovisa Ulrika’s panier and entire ensemble (yay!) can be found in Norah Waugh’s Cut of Women’s Clothes… weirdly placed in one of the glossy photo inserts, underneath the photo of the dress. My memory is that there’s a pattern of Sofia Magdalena’s panier out there somewhere, but I can’t remember where — am I crazy?  Remind me if you know either way!

Thanks to Andrew, who found these two c. 1760 paniers: 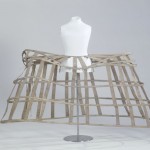 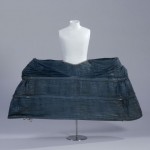 There is also this English panier that seem helpful.  English paniers were known for being more boxy than French, but this doesn’t seem to follow that rule: 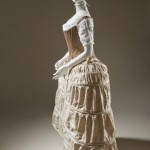 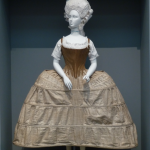 Because there are no extant French court paniers, I wanted to find another way to get some information on sizes and shapes.  I was inspired by American Duchess’s post on panier proportion to do something similar, except with paintings (I’m not convinced that museums always know exactly what shape and size hoop should go under a given skirt; I’m sure the Livrustkammaren has made reproductions of the extant Swedish court paniers to support the corresponding gowns, but other museums have to made educated guesses when working with dresses that do not have a surviving panier).  I decided to focus on images that I thought were trying to be relatively realistic, and so avoided fashion plates as those always seem exaggerated to me.

In order to examine silhouettes, here are a bunch of images of French court dress with my bad Photoshop annotations.  First, I outlined in red what I thought was the general side silhouette of the panier.  Then, I wanted to compare sizes, so I marked the width of the waist in green, and then copied that shape to see how the measurements of the panier compared.  Being a tall girl and so interested in height vs. width, I also marked in blue the height of the wearer, and compared that with the hem width of the panier.  The big problem, of course, is that nearly ALL of the images I’ve seen of women in court paniers show them standing at an angle (if you know of any full face images, send them my way!).  So that means we’re dealing with perspective, and so nothing is going to be spot on.  And, of course, we can assume the painter is A) flattering the sitter (probably tinier waists than reality!) and B) tweaking reality to suit their own, or the subject’s, taste. 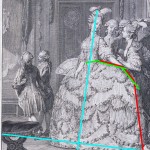 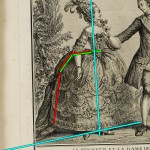 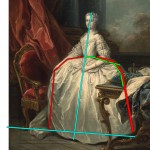 Portrait of Marie Leszczyska, 1725, by circle of van Loo. Annotated image via demodecouture.com 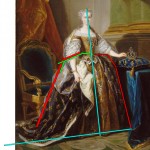 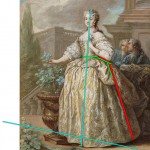 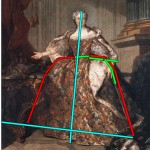 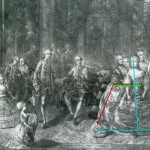 Presentation of the portrait of Maria Antonia of Austria (Marie Antoinette) to Louis Auguste, Dauphin of France in front of Louis XV and the court at Versailles, 1770. Annotated image via demodecouture.com 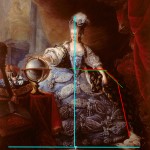 Portrait of Marie-Antoinette of Austria, 1775, by Gautier Dagoty. Annotated image via demodecouture.com 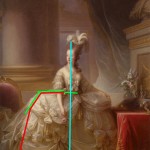 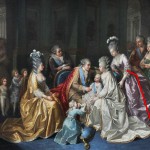 The Royal family around Louis Joseph, Dauphin of France, in 1782. Annotated image via demodecouture.com 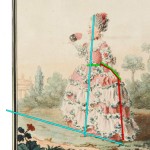 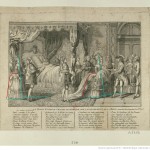 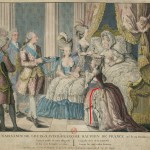 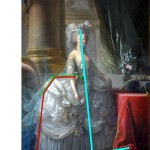 Queen Marie-Antoinette of France by Vigée-Lebrun, 1783. Annotated image via demodecouture.com 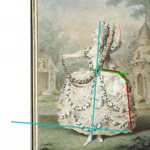 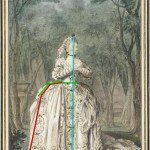 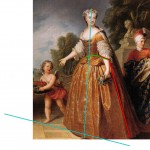 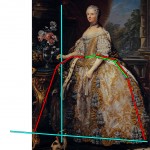 The overarching lesson that I get from this is that yes, there is definitely variation, but also that it seems that all the French court hoops have an curved/arched top corner (using the “elbow” canes) and some degree of flare on the side (from a little to a lot).  There is also some degree of downward slope (from a little to a lot) starting at the waist (only “Presentation of the portrait of Maria Antonia of Austria” has a completely horizontal side).  None of them have the squared off corners and vertical lines seen under English court dresses.  Despite references in the Encyclopedie (above) to knee-length hoops, I’m not seeing any of the silhouettes that you’d see wearing that kind of hoop (of course, it could be that shorter hoops were worn for less formal occasions; having your portrait painted in court wear is obviously the most formal).

Hoops of the 1720s-30s were definitely narrower overall than those that came later.

The 1730s-40s portraits of Marie Leczinska are all 1 to 1.75 of the waist width (before beginning the elbow curve), and a lot of flare from the elbow to the hem — although none have as much flare as the extant 1751 Lovisa Ulrika paniers.  The hem width appears to be about 3/4 of the wearer’s height.

The 1770s-80s images of Marie-Antoinette are all almost 2x the waist width (before beginning the elbow curve).  The 1775 & 1778 images show a lot to a medium amount of vertical flare.  The 1783 image has far less vertical flare, but there’s still a little bit there.  Hem width is 3/4 to just under the wearer’s height.

And then there are the slightly weird outliers, like “Naissance de Louis-Xavier-François,” which shows a pre-teen/teenage girl (probably Marie-Therese, Marie-Antoinette’s eldest daughter) wearing quite small hoops… and “The Royal Family Around Louis Joseph,” in which nobody seems to be wearing any hoops at all!!  Make of THAT what you will!