And busy work season, which combines to mean not too much sewing and not very much posting from me! But work is starting to calm down, so I thought I’d tell you about what I’ve been up to lately. I have been doing SOME sewing, but I have no pictures, so that will need to wait another day or two for a report.

Mostly it’s been Renaissance season, performing with my Venetian courtesan singing/acting group, Bella Donna.  First on our list was Much Ado About Sebastopol, a new-ish Renaissance faire that is A) a benefit for local schools and B) trying to create a new version of a faire that is based on some attempt at focused historical accuracy.  This year it expanded from one to two days, and it was a BLAST.  The focus is on an English village with English villagers doing lots of crafts and activities — sewing, weaving, etc. — with a visit from the Queen and Court.  Bella Donna is the only foreign group there, which means there’s a more cohesive village-y feel than you get at most faires.  The crowd is fun and more history/family oriented than the barbarian crowd (not that there’s a problem with barbarians…).  And again, they have craft demos and activities for kids… and a REAL BUILT STAGE, which we love to perform on, where we and the audience are in shade most of the day!  (Nobody wants to watch a stage show when they’re sweltering in the direct sun on a day in the 80s/90s). Lots of fun and sillness ensued — at one point I sat in the Queen’s chair and tried to encourage customers to annex Russia for me, although it was hard to convince them. 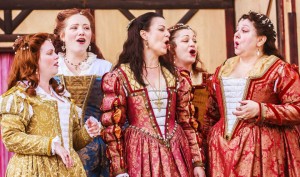 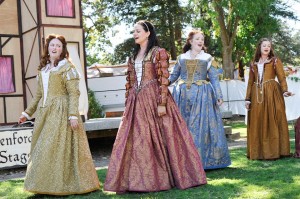 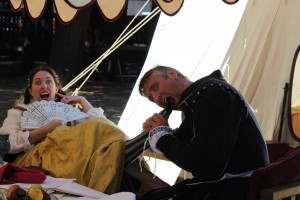 Our ruffiano, Bastiano, gets vicious with Tullia | (C) Claudia Laughter 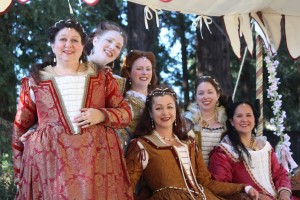 Hanging out in our pavilion | (C) Claudia Laughter

Then two weeks later was the San Francisco Italian Heritage Parade, an annual event that winds through North Beach, the Italian neighborhood of SF.  Its a ton of fun, with queens and courts and marching bands and Italian-themed groups like us and totally non-Italian themed groups.  The best part is the last 10 blocks or so are a complete street party, as restaurants move tables out onto the sidewalk and everyone eats and drinks wine and watches the parade.  We were joined again by some friends from the German Guild of St. Max, and they — plus our Venetian boys — were the hit of the parade… or, I should say, their codpieces were!  We do some singing when we can, when the parade slows down enough to let us breathe, and did a combination of singing and dancing for the judges at the end of the parade.  Then we were off to the Colosseo and Mona Lisa restaurants, who were our sponsors this year, to sing for their customers and eat lunch (some SERIOUSLY good pizza, people!).  My feet were killing me by the time we were racing to catch the ferry home, but I’d had so much fun that it was totally worth it! 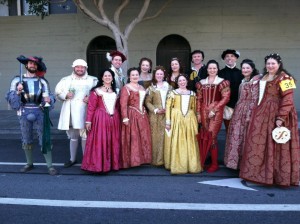 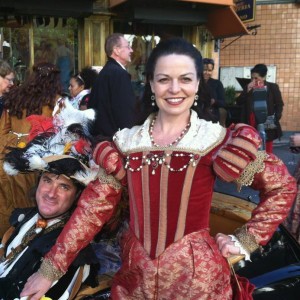 Isabella hangs with a German landsknecht 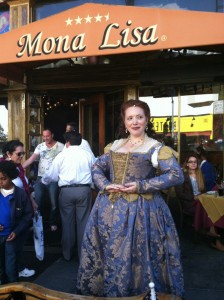 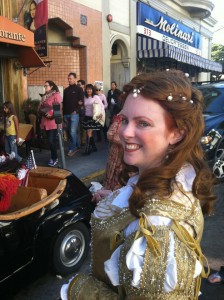 Lucrezia in her pearly glory 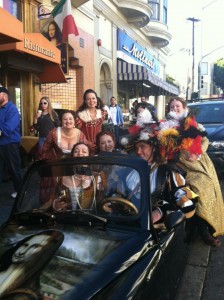 Posing in the restaurant owner's vintage fiat, painted with the Mona Lisa

Costume College – OMG Too Much Stuff!