I’ve had a review of this film posted for a long time, and it was written based on only a vague memory of the film. However, my friend Shawna encouraged me to watch it again because the costumes were so whacked… so this one’s for Shawna!

And… the costumes.  Oh, the costumes.  When the movie opens, a title card tells us the year — I’m pretty sure it’s 1748, but I could be off by a year or two.  Here’s why this matters:  Look, filmmakers — you clearly were not trying to make a Merchant/Ivory, historically accurate down to the toilet paper masterpiece.  Why throw a year on there?  Why not just let it be an 18th century-esque period-ish film?  Because lemme tell you, the costumes are a TOTAL MISHMASH of different eras, some historical, some not.  Someone will be wearing a 1770s pouf hairstyle and sitting next to someone else in a 1750s tete de mouton.  Liv Tyler has one scene (the ball) where she wears an 18th c. hairstyle, but the rest of the film she runs around with her hair down.  And the dresses are, by and large, totally goth-ified, sex-ified, and modern-ified, which you can see in the images below.  At least Liv’s are generally pretty… With the aristocracy, they’re very amped up and over the top in a silly way.  Many times it works, even when Alan Cumming (complete with eyebrow ring) is wearing the 18th c. equivalent of a purple Mad Hatter hat.  But there’s a minor character who, at her wedding, wears a sort-of-francaise that has, I kid you not, what looks like 2×4’s for panniers — it’s so bad I went and screencapped it from YouTube so I could show you.  Of course, the screencaps don’t really do it justice, so you might want to watch the scene starting at 0:43 yourself.

In the end, it’s a fun movie, and laughing at the costumes is part of the fun, so I do recommend it!

If you like this era, you might also want to check my 18th c. Costume Movie Reviews.  If you’re in the mood for more silly-take-on-18th-century, I specifically recommend the following costume movies:  Abduction Club (2002), Brotherhood of the Wolf (2001), Casanova with David Tennant (2005), and Fanny Hill (2007). 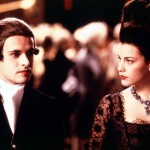 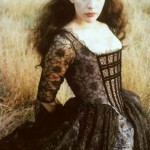 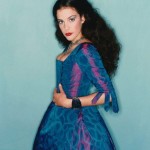 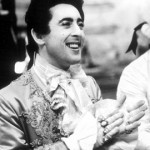 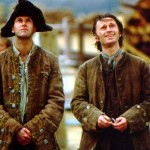 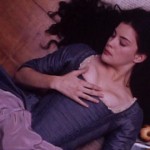 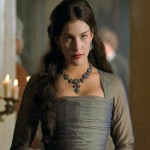 Clearly, 1/2″ boning was used on the front of this bodice. 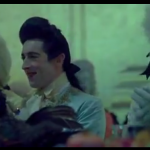 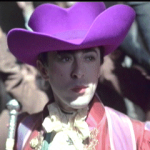 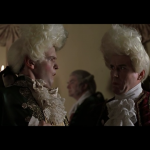 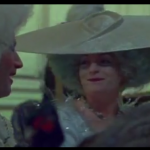 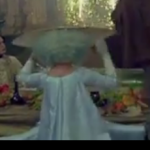 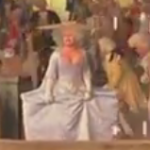 More attemps to show you the hilariously crappy panniers… 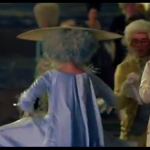 One more glimpse of the crazy weird panniers!