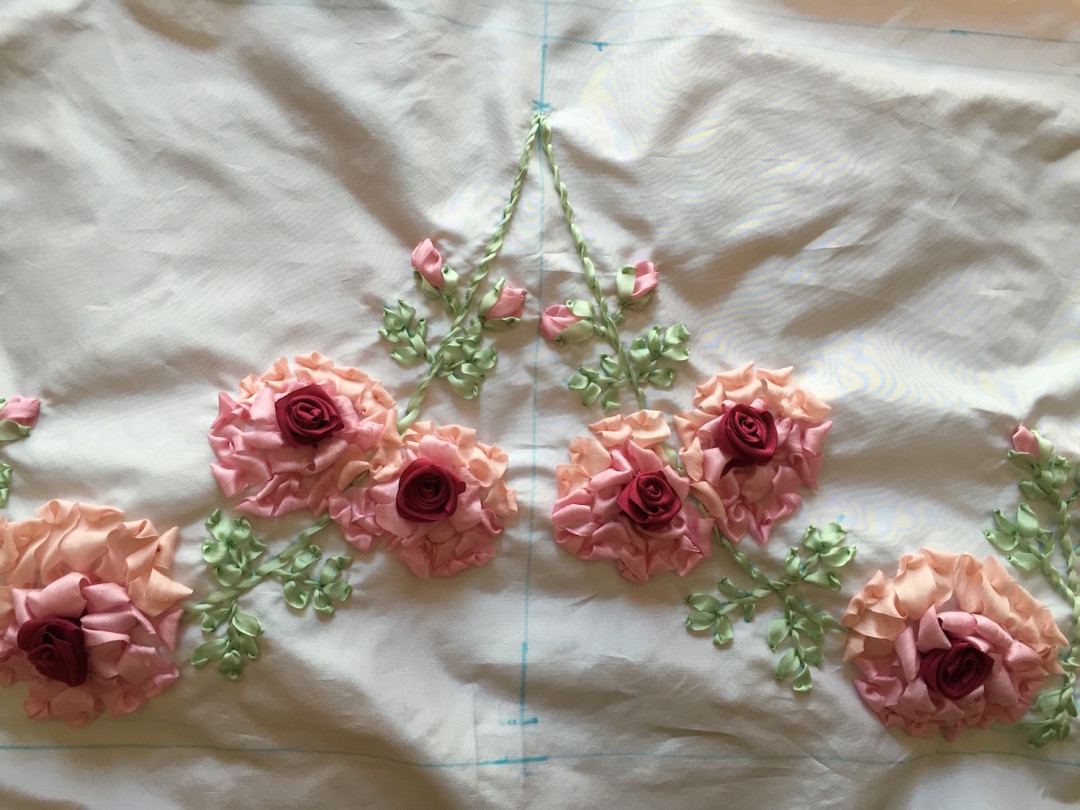 I put together a Pinterest board with all the examples we’ve tracked down. There’s not a lot, but there’s enough, including examples where ALL the embroidery is done with ribbon (some use silk floss and ribbon), and with the same kinds of raised dimensional flowers that are made today.

Also, I was gratified to find these two court gown bodices that feature dimensional ribbon flowers as trim: 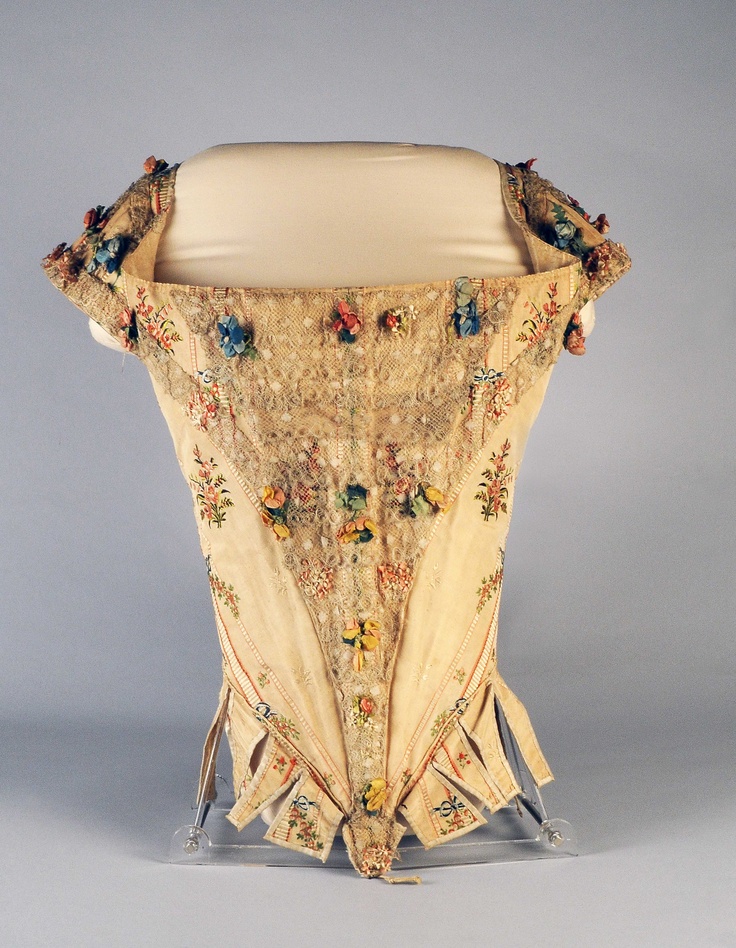 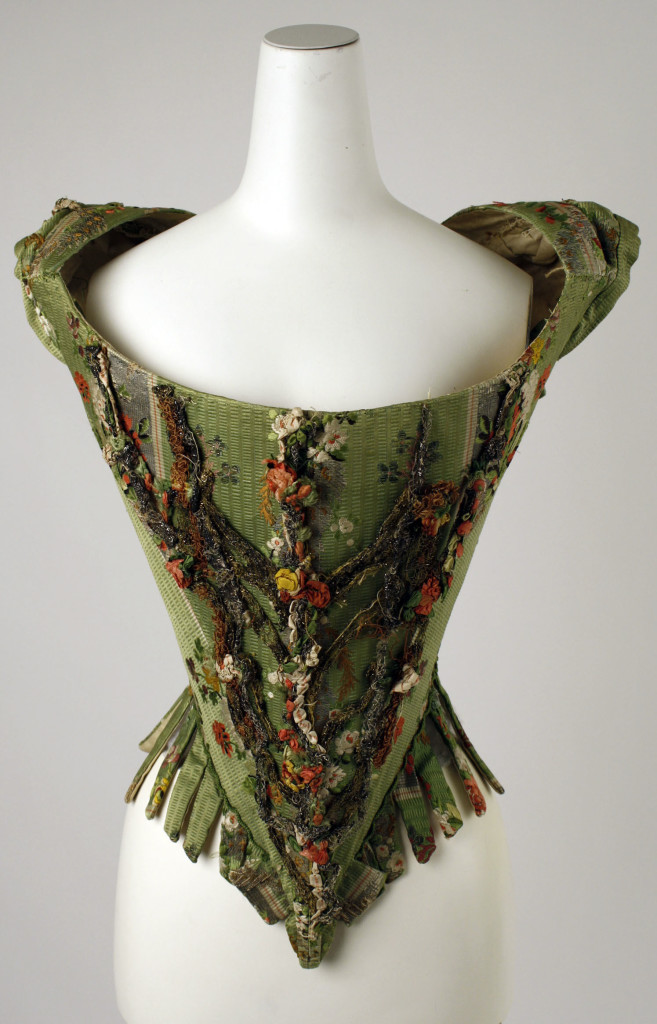 Onwards! I really wanted to try to incorporate some “ombre” ribbon, but it seems like the only manufacturers (like Mokuba) make it only in polyester. Ew. So, solids it is… and that’s probably a good decision, as the source image I’m working from seems like the embroidery is more solids.

Luckily there are TONS of ribbon embroidery tutorials out there. Oddly, most of them seem to be Russian or other Eastern European countries, but luckily you don’t have to understand the language to follow what they’re doing visually!

Here’s a reminder of the embroidery in the design. The image isn’t high resolution, but I’m going with what I can glean from it: 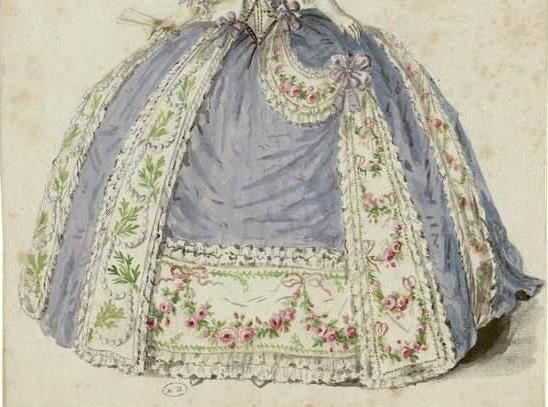 I started with a bit of experimentation on the roses: 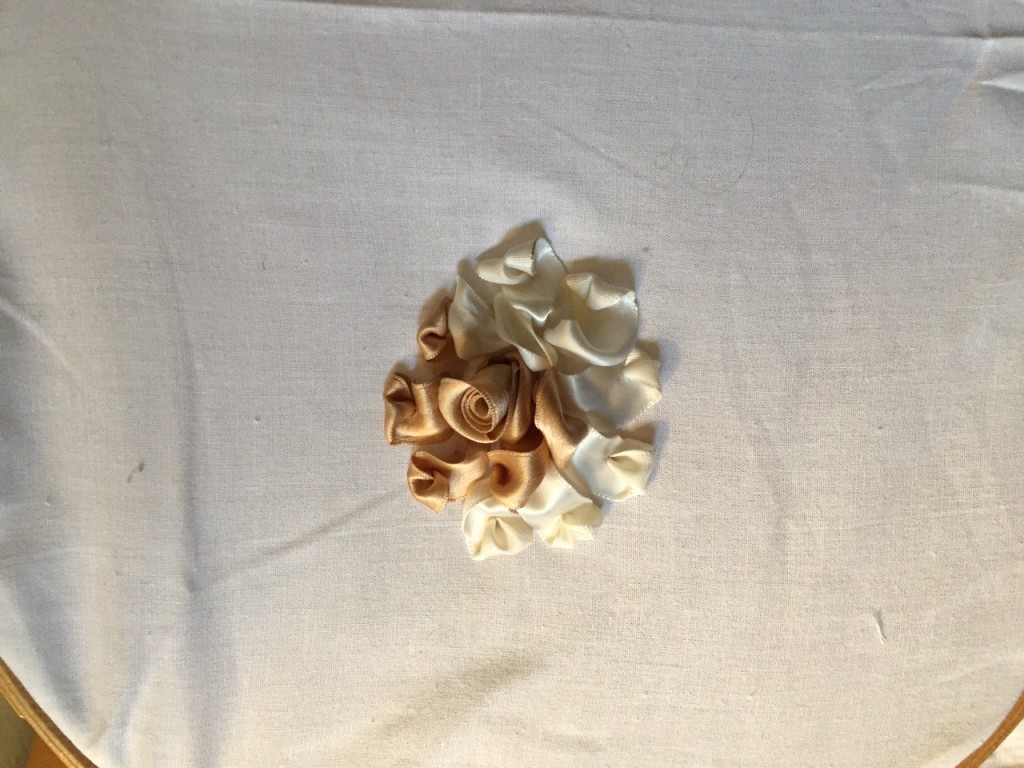 Test rose in random ribbon. Ignore the different colors, it’s just what I had on hand. 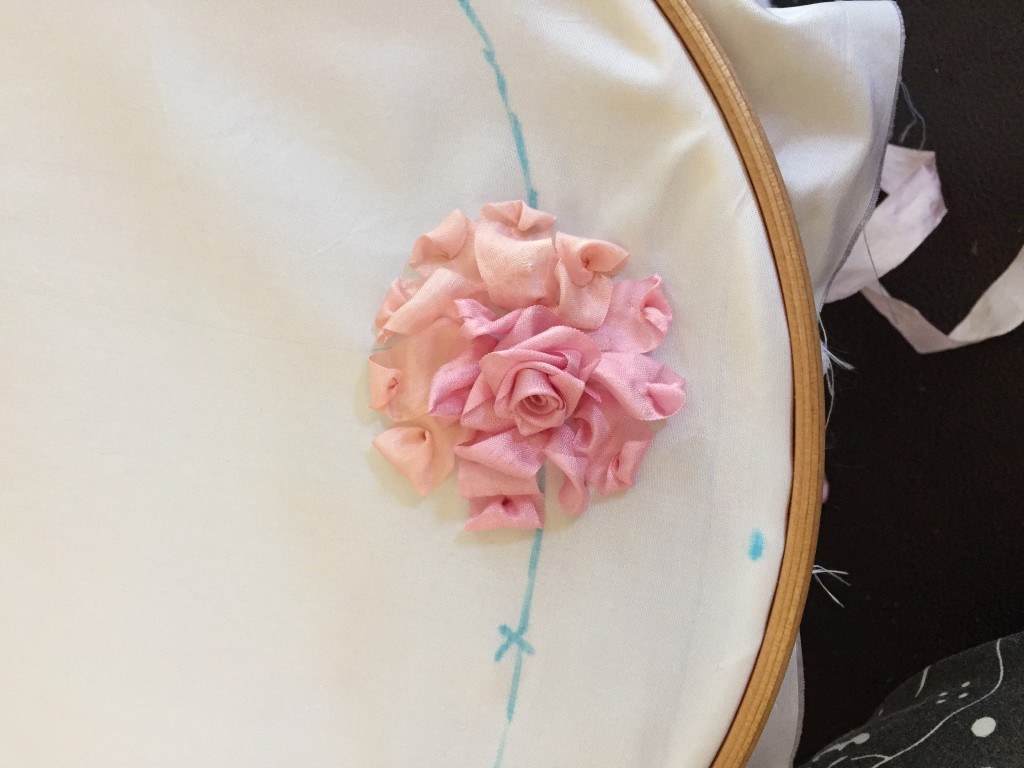 What I thought was my first real rose, only to decide 1) it was too small, and 2) I needed a darker color in the center to better match the source image.

One nice thing is that I don’t have to be precise in marking my design. I started by drawing in the general swoops, then marking the rose centers with an X. I embroidered the roses first, then went back and added rough lines for leaves, buds, and stems, then embroidered those. Now that I’ve figured things out this far, as I’m working on the side panels I’m doing all the elements as I go along. 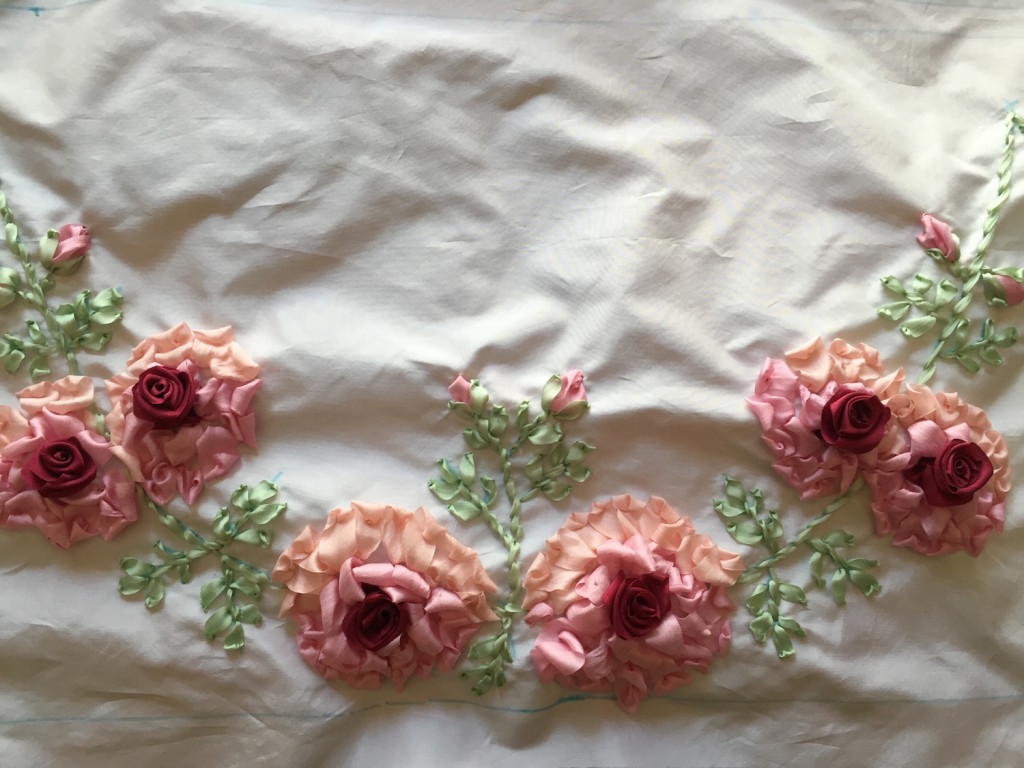 Close up on the front panel.

I needed to get the shapes for the side panels, so I put things on my dress form and started using some white ribbon as a visual marker… only to discover that the pleats at the CF of my petticoat weren’t doing my embroidered panel any favors. 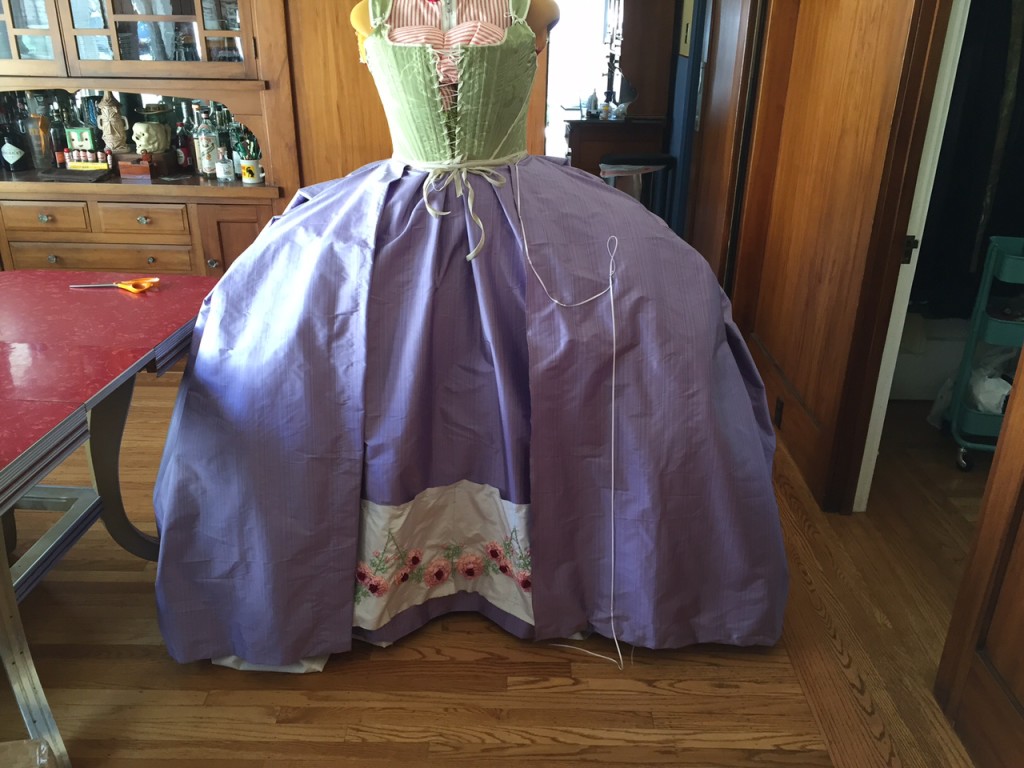 First attempt at layout on the petticoat.

So, I pulled the front of the petticoat apart so that it would have a completely flat front. This necessitated moving those pleats out onto the paniers, and piecing in on either side of the waist (but hey, piecing is period!). 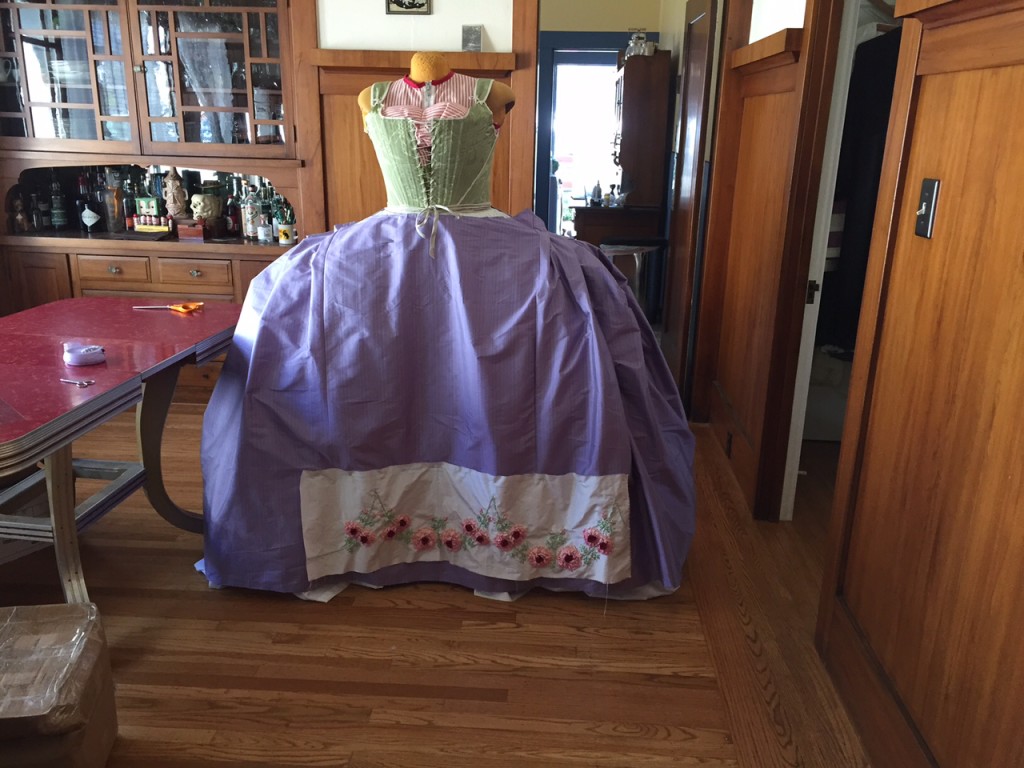 Petticoat with flattened front — better display for the embroidery!

I’m now working on the skirt panels, and I’ll update you on those when I’m done-ish!