Oh, how lagger-y I have become!  Oh, how many updates I have in my mind and not on my blog!  Maybe it’s time to retire this here thing… or get my butt in gear!

SO!  One thing I don’t tend to post a lot about is my 16th c. Venetian courtesan/singing group, Bella Donna.  Not because it’s not a hugely fun and time-consuming thing that I do, but because I feel like the report would be, “Rehearsed, rehearsed, rehearsed. Performed, had fun!” So in an effort to counteract that, I’m going to try to tell you about this season.

Way back in April, we performed at a one-day benefit for a middle school. Small (comparatively) crowds, little shade, and paved in light-colored cement so that our eyes were BURNING from the sun. Oh, the squinty pictures! Nonetheless, we had fun, debuting new music… A while back, the Queen told us that the Earl of Leicester would cover any of our expenses while we’re in London, so we’ve had a long running joke that he’s supposed to buy us all ponies, which of course he always fails to do. So we had fun telling him that we had a song about our ponies for him, and then singing “Gush Forth My Tears.”

Ardenwood Renaissance Faire was fun minus the humidity, which put a damper on things… literally, when poor Linda felt faint and was down for the count, and I got carsick on the drive home on Sat. No fun throwing up on the side of the freeway in a corset, I tell you! Nonetheless, it was good in that we had to cover Linda’s parts in our show and found that we actually COULD! 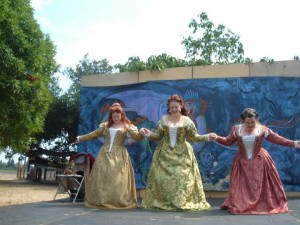 Much Ado About Sebastopol was in its second year and man, did they knock it out of the park. Those people who long for a more historically accurate Elizabethan faire should seriously check this out. While the location isn’t anything to get excited about (city park – but hey, there are TREES), the faire organizers are going back to the original vision of actual living history.  Most of the performers are playing English lower and middling classes, and doing craft demonstrations and other actual bits of living history. Whoa! Sadly, our director/harpist Shawna had to miss that show, and so we weren’t as exciting and sparkly as when we’re with her (no musical accompaniment, no dancing).

We’ve done the San Francisco Italian Heritage Parade for a number of years now, twice winning first prize for “Novelty Act.” Last year, we were smoked by a group of real Italians from Genoa who had (cheesy costumes and) drums and swords and lots of people. So this year, we invited our friends from the SCA and the German Landsknecht Guild of St. Max to join us, and made a HUGE showing. The parade is always a blast — everyone’s in a good mood, random people give you wine and take your picture, and it’s Fleet Week so the Blue Angels are flying overhead. This year, we won honorable mention for “Novelty Act” and had a blast doing it! Here’s a ridiculous video of us all singing along to “Don’t Stop Believin'” while we’re waiting for the parade to start… 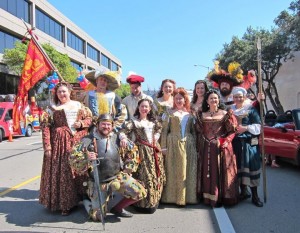 Finally, it was time for our favorite faire: the Folsom Renaissance Faire. It’s the last faire of the season, so everyone’s in a good mood; the site is pretty, with lots of trees; and it’s a fabulous girl weekend. What’s not to love?

I’ve been dying to make a new Venetian dress but had absolutely no time to do so, so contented myself by making a new girdle and parasol. We all use those Chinese paper parasols, given that we need to keep the sun off somehow and Italian women weren’t into hats. I want us to step up the game and go with something more period-accurate, so to that end I recovered a vintage 1950s umbrella (with a tag inside the cover that proudly proclaimed it was “100% acetate”!) with some gold silk taffeta left over from my 18th c. Brunswick. I thought I’d have it ready to go for the parade, but the cover ended up too small — wah! So I had to unpick all the seams and let them out. I’d bought a ton of this bullion fringe, thinking I’d cover the entire edge, but once I let the parasol out I didn’t have enough, so I cut it into pieces and made tassels. 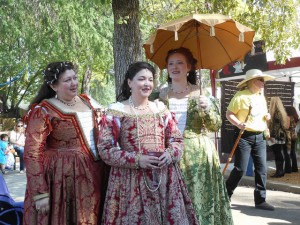 The other exciting thing, costume-wise, was Jenn made Shawna a new costume. Shawna is our director and works her butt off for our group, researching music and teaching it to all of us, plus leading the acting brigade… but she doesn’t sew. A bunch of us got together to make her last costume, but because we all took various pieces of it, it didn’t come together as well as it should have (and the fabric she chose was affordable but not fabulous). So Jenn had had enough of it, and took her in hand to make her a GORGEOUS new red silk damask dress plus a new corset that gave her a beautiful shape. Jenn is an amazing costumer who does precision work, and the ensemble turned out stunning. Isn’t Shawna a total goddess? 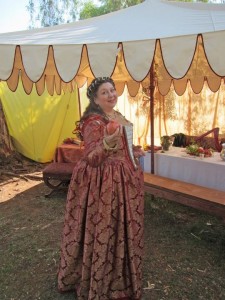 Folsom was a blast, like always, but perhaps even more fun because this time we continued with the “augmented Bella Donna” theme, having some guest/non-stage show performers — the fabulous Karen, Sarah, Trystan, and Francis. We set up a space for the first time ever, and while it was small, it was perfectly sized for us (you can see a bit in the background of Shawna’s picture). Francis and Sarah have a pavilion and a bunch of gear they use for the SCA, so we got to set up a space that was 1) our’s and 2) appropriately pretty and non-peasant-y. We had tons of fun playing with our larger group; we made the local newspaper (that picture was taken during a tipsy hour where we hooted and hollered at literally everyone who walked past our set-up; we were having so much fun, we couldn’t even stop to pose for the photographer); plus we debuted our newest courtesan, Chlamydia, which was gut-bustingly hilarious.. Trystan took a bunch of pictures, which you can see on Flickr.

Our last event of the year was singing at the PEERS Bal de Vampyre, which is probably the most fun costume ball of the season. It’s about 5 blocks from my house (ok, bonus for me), held in a GORGEOUS masonic hall with 3 floors — a huge ballroom, a social room, and a basement lounge with goth DJs. Oh, and there are 2 bars! Sadly, I had the flu the week before and was still feeling woozy and out of it, so I didn’t have as much fun as I usually did. Still, it was fun to sing and our space was set up well this year so we were able to attract a good audience. The best part was we rewrote some of our English songs to make them vampire-y, and led the audience in a sing-a-long to “Greensleeves” that was about a spurned vampire victim/lover/slave and went, “Red blood was all your joy / Red blood was your delight / Red blood was your heart so cold / And naught but my flowing red blood.”

And yes, I did make my champagne costume, and I felt it turned out totally meh… but I Brownie-promise a full post about that! 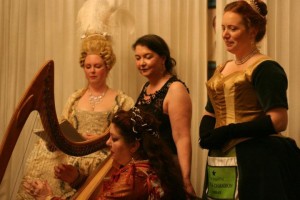