Whew!  I am just coming to the end of my super crunch time at work, and I’ve barely had time to open emails, let alone keep up with anything else.  If I owe you an email/update about the court projects, don’t worry, I’ll be getting to that asap… plus posting a round-up of what’s going on out there in blog-land re: court gowns.  To tide you over, check out these great posts on French court dress from the Dreamstress, and Swedish court dress from Isis’ Wardrobe.

As another tide-you-over, I thought I should get around to finally posting pics of my REALLY finished 1760s Brunswick.  I’d needed to trim the skirt, and wear it to document said trimming!  Well, I got to the trimming a year or two back, and then finally had a chance to wear it when my 18th century group Lumieres went to a museum in San Francisco called the Legion of Honor, which is a copy of the French version in Paris.  They were having an exhibition on “Royal Treasures from the Louvre:  Louis XIV to Marie-Antoinette,” which was very appropriate!  The best part of the day was when we were having drinks and food in the museum cafe, the curator came out to see our costumes.  We all introduced ourselves as our characters, many of which are based on real French 18th century people, and the curator knew who all of us were!  (To me, the Duchesse de Polignac, he said “You naughty girl” – ha!).

So here are some pictures of the finished Brunswick in the courtyard of our local 18th century reproduction building: 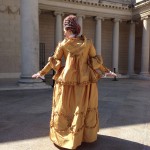 Lord of the Rings Dress