So I haven’t been blogging lately (obviously) — partially because I’ve been too busy, and also partially because I’m feeling like the dress diary is over.  There are so many costume blogs these days that I think it’s hard to keep up with them all, and I don’t get much feedback on my own dress diary posts, so I’ve been thinking of doing more wrap-up posts — here’s what I made and here’s how I made it.

But since I AM sew-sew-sewing for France, I wanted to show you where things are!

First off, the camisole à la polonaise is almost done.  I had a bit of quandry when it looked like I didn’t have enough of the contrast windowpane fabric to do skirt ruffles, but I managed to find a piece I’d forgotten about and have eked out enough.  Just need to gather and attach the hem ruffle, and I want to make a couple of sets of different color bows (I’m thinking green and lavender) to wear at the neckline and sleeves. 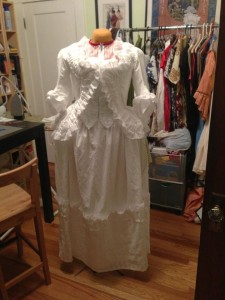 I’m working on a gazillion things simultaneously, which is kind of nice in that when I get sick of one thing I can put it down and pick something else up.  Here’s the robe à la turque, which turned into a robe à la circassienne once I realized how impractical a white silk satin gown was with a train.  This was a particular adventure because I decided to drape it on my dress form using the fashion fabric.  A great idea, except when you’re dealing with $40/yd fabric.  Yeah.  There were some screw-ups and fabric wastage.  I’ll give you the long version when I write my “how I made it” post! 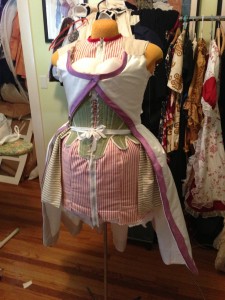 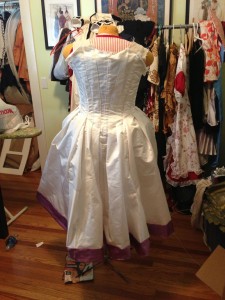 Finally, there’s the redingote, of which I don’t have an up to date photo.

I still have LOTS of fiddly bits to do — sleeves to set, 10 million buttons to make, plus I am embroidering away on Francis’s waistcoat… And I want to style a new wig, and make at least one hat.  I’ll try to post more pics in a day or two!  Luckily I’m off work as of tomorrow, so I have 1.5 weeks to finish sewing, pack, and get generally organized.  EEK!

There’s also some important news to post about my research, but I’ll save that for another post….

Because It’s All About the 18th Century, Isn’t It?