I’ve been inspired by Jen of Festive Attyre’s sewing room redo, which she’s posted about more on LJ than her blog, but you can get a glimpse of here.  She went from a super disorganized, difficult to use space to something glorious.

The house I’m in is the first one in which I’ve ever had a sewing room, which trust me, is AMAZING.  It’s pretty small, but I don’t care — I can make a mess, close the door, and just leave it!  When we first moved in I tried to set it up as well as I could, but I’ve found I needed to refine things over the years, as when things explode, it makes it very hard to get any work done.  Sadly I don’t have any before photos, but here are some things I’ve been doing over the past year or so: 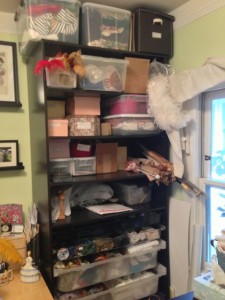 The main issue is always storage — getting things put away (so they’re not out cluttering my workspace) AND put somewhere I can find them.  When I first moved in, I bought this big Ikea storage shelf set, and I’ve found that I just need to keep refining how I use it so that I do so more efficiently.  That includes getting like things into boxes, putting less-frequently-used things higher up, and labeling boxes so I know what’s in what.  I’m always thinking I need more storage, then I reorganize this cabinet and find I just need to use it better! 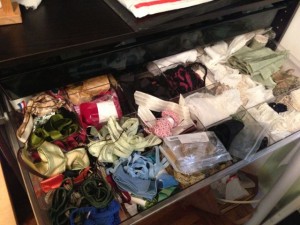 One of my favorite things is the cabinet has the option of mounted pull-out drawers with compartments.  I have two of these shorter ones, which is where I keep my trim (shown) and things like ribbon, glue, etc. 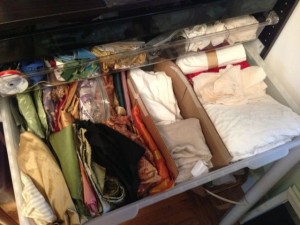 I have two taller drawers that are my remnant bins, where I keep all the leftover bits of fabric I might use again, or fabric that could be used for lining or draping.  These drawers were getting messier and messier, to the point where I had no idea whether I had any lining-appropriate linen on hand.  I dragged both drawers out to the living room and sorted through them all, throwing away stuff I wasn’t going to use, putting like things with like, and making separators out of cardboard to keep sections organized.  Yes, I do in fact have a TON of lining-appropriate linen… 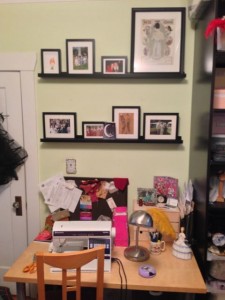 Sewing machine table and some decor 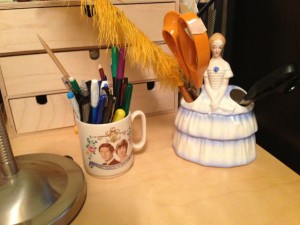 Sewing machine table and some of my decor.  Since I got rid of a pretty big desk, I usually pile papers on the right hand side, which makes it unusable — my pin magnet and scissors will end up on the 3″ of available space and that’s it.  I forced myself to go thru all those papers, and while I didn’t go so far as doing any filing, I did manage to put any need-to-keep stuff in a box that’s now living under the table. 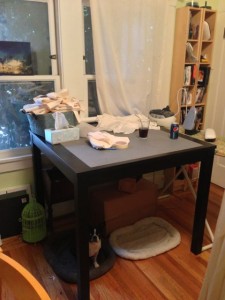 New (smaller, taller) cutting table. Usually has rolling drawers full of historical undies under it. Currently has Olive under it.

For the longest time, I had a rickety folding/rolling cutting table from Joann’s.  It was never tall enough, so I’d get a crick in my back working at it.  Also, having an available flat surface is like a giant neon sign to “DUMP THINGS HERE”!  Also, to have more space in my small room, I’d frequently leave one of the leaves folded down.  I replaced that table with this, a higher bar table from Ikea.  It’s tall enough for me and a reasonable size for the room.  The basket is my “current project bits” basket, which lives in the storage cabinet when I’m not using it.  I also have a high bar chair that I can use if I’m sitting and working at this table.

One idea I got from a lot of blogs about craft/sewing room space was using the space UNDER things as storage.  I used to keep all my historical undies in two big plastic tubs that took up a huge amount of space in my closet.  It was super annoying to paw through giant bins of white on white to find the right chemise or drawers or whatever, so I replaced that with two rolling wire drawer sets that usually live under the cutting table.  This way, I can keep all the chemises in one drawer, corsets in another, etc.  For a while, those drawer sets were blocking the large heater vent that my elderly cat Albert started PEEING IN, so they’re not shown in this photo — instead, it became a temporary puppy space.  But the heater vent has been cleaned and the drawers are back now!  Oh, and Albert is on an SSRI, which is totally helping (better living through science!). 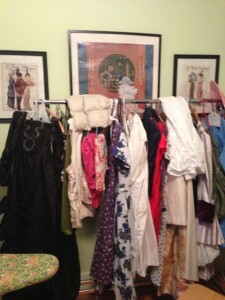 My husband randomly bought me this garment rack, which initially annoyed me because it takes up a wall, but it’s proved very handy both for “things I’m working on,” “things that I should be working on,” “things that need to be put away,” and “things to sell off.”  I do have a closet in this room, but as you might guess, it’s packed with all my finished costumes, so it’s nice to have a staging area. 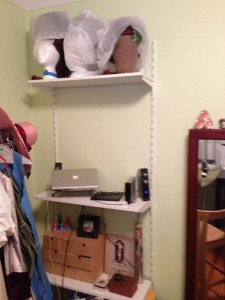 I used to have a combination dresser/desk in this corner of the room.  The desk was ostensibly for my computer and the dresser drawers for fabric, but the it wasn’t an efficient storage option and the desk itself just got piled with papers.  I got rid of that and replaced it with some shelves for wigs (top), misc (bottom), and a computer docking station — which has turned out to be fab!  I hardly ever use my computer at a desk unless I’m watching a movie in my sewing room, so it’s at the perfect height to do that, and otherwise if I want to use the computer, I’m generally on the couch. 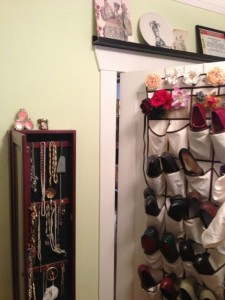 Mounted jewelry cabinet and over the door historical shoe rack.

Like any good costumer, I have a ton of costume jewelry.  I had a jewelry box, but everything got jumbled up in it and pieces were getting broken.  Linda gave me the idea to get a wall-mounted jewelry rack, which has let me organize things plus has a small mirror on it. 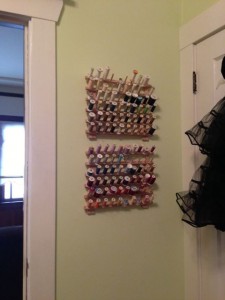 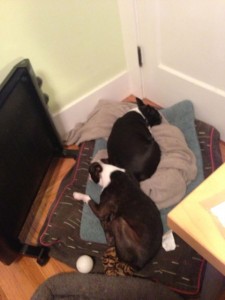 Yes, it’s required in my house to have critter accommodation in whichever room you’re planning to be in.  Usually, for the pups that’s next to the sewing table; it’s been cold here in California, so there’s a bonus space heater for them.  They don’t generally like to use the same bed, but they both like that heater! 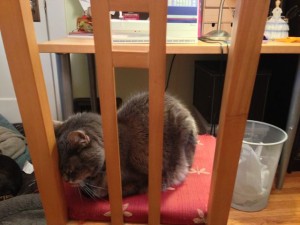 This is what happens if I don't have two padded chairs...

I also have to have not one but two padded seat desk chairs in my office.  If I don’t, this is what happens, and how can you disturb that?  With two chairs, Albert has somewhere to hang and I can just swap the chairs as he decides which one he wants to sleep on (which frequently changes).