Doublet!  I made one, and shockingly quickly too!  After procrastinating all Spring Break (ie working on something for myself), I forced myself to pick up this project.  Luckily I’d already done one mockup & fitting, so I was able to get most of this done in about two days.  I shock myself!  And I actually kind of enjoyed it, because I felt like I knew what I was doing.  The handwork took a bit longer — adding trim that I couldn’t machine sew on, putting in the lining.  But that’s stuff I can do on the couch on a weeknight.

But there’s an issue… I put this on Michael, and he said (very nicely), “It’s too tight!  It feels like a suit jacket that’s 1-2 sizes too small.”  Now, I have NO idea what it should feel like to wear a doublet, so I don’t know if I screwed something up or whether this is just an issue of a man who has never worn costume before (okay, he’s worn 1920s but that’s totally different).  Any guesses?  There are some wrinkles going from the front of his armscye to his underarm, so I was thinking I could open up the armhole more (UGH THE WORK!), but won’t that just make things tighter by having a bigger armscye?  I had him lift his arms up as high as he could go, so you can see his arm movement range… the back looks good – no real wrinkles – altho I’m guessing that’s where the “too small” comes in.  I could piece a strip in to make the doublet itself wider by piecing something next to the arm (UGH THE WORK), but is that even going to help?  And, is this a problem that needs fixing? 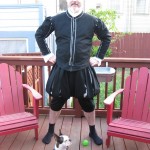 A Man (told to pose like Henry VIII) and his dog 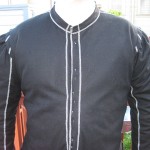 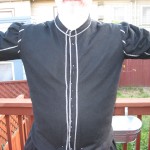 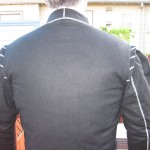