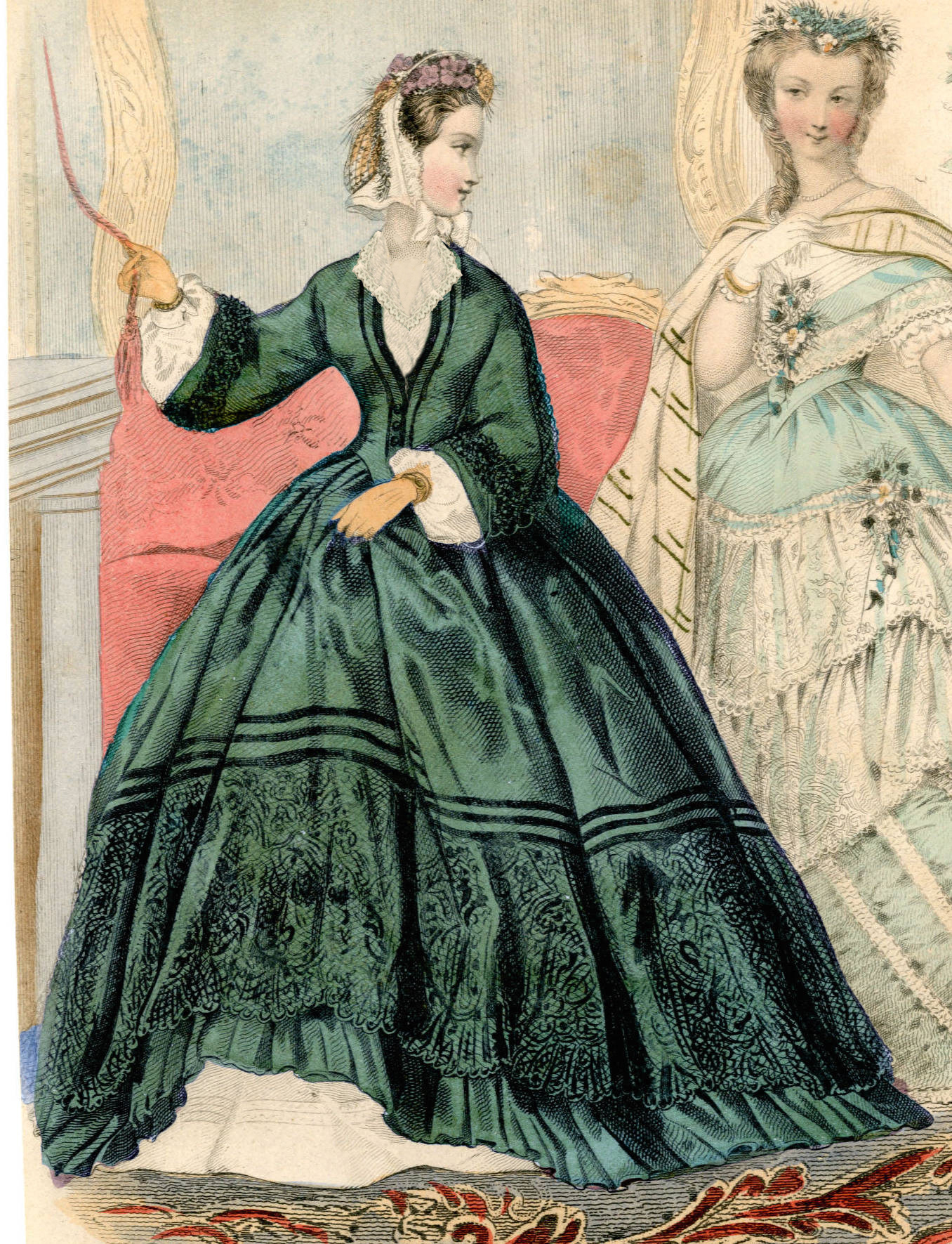 Be afraid. Be very, VERY afraid. For I have decided that it’s time to perform at Dickens Fair, something I haven’t done for a number of years. And while previously I played scum, this time around I’m joining the Adventurers’ Club, who portray real historical people — the intelligentsia of Victorian England.

END_OF_DOCUMENT_TOKEN_TO_BE_REPLACED

Hey, I finished something!  Even better, this albatross!

Of course, I was up pretty late the nights before I wore this in order to get it done.  I widened the center front and reattached the trim, only to realize that it was STILL too narrow.  Ain’t nothing like doing it the hard way!

For lacing rings, I didn’t have time to get some real soldered rings, so I headed off to the hardware store and looked at random bits and bobs until I found some small-ish keyrings — hey, they worked!

I had one small issue when I put the gold ball trim on the CF, which is that I got to finish putting on the trim and realized I had about a half-ball-width hole, so I had to decide between a slight gap or trying to squeeze one more ball in.  I ended up squeezing one more in, which meant that the trim in front ended up looking kind of wonky.

I ran out of time to do anything useful with the champagne label, so I had to safety pin it on.  Looking back, I should have basted it on in the car, because it looks a little bit lame.  But oh well!

Last thing, I didn’t want to wear my hat until we got to fair because it was raining, and I hadn’t really planned out my hair.  So while I pictured wearing the hat on the top/side of my head, the only thing I could find to attach a hat pin too was way back/side — so I ended up looking pretty frowzy hat-wise, but everyone agreed that it was appropriate for a champagne bottle!

It’s not my best work, but it’s a whole lot better than the first try, and it was fun (and practical) to wear!  I had a great time at the fair, running into all sorts of friends wearing fabulous costumes and having a lovely tea. Oh, and most everyone got the costume, which was a good thing! 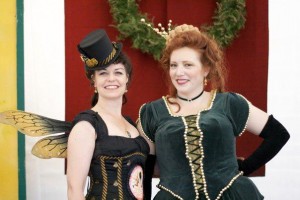 Me and Tara, who went in a beautiful bee-themed fancy dress ensemble. 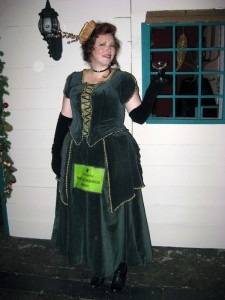 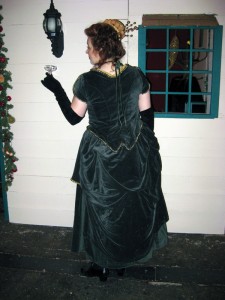 So what’s next?  A whole lot of 18th century, but that’s another post!

So I had two things left to do on this project before I wore it:

1) The skirt. I made it to have a long train, which was great for Costume College (carpet!) and not so great for Dickens Fair (gross Cow Palace floor complete with sawdust!).  So I put the bustle, petticoats, and skirt on my dress form, grabbed a lot of safety pins, and started pinning up the train.  I futzed with different options and basically ended up making the “pouf” part of the skirt bigger. I tried to mostly pin it to the ribbon tie, but that didn’t totally work so I pinned it to the top petticoat as well, and then just put those on at the same time. I also cut off the ribbon ties and made an actual attractive pieced bow, rather than the hastily tied bow from the first wearing — altho you really can’t see it in the pictures!

2) The bonnet. I had the time for once to indulge my seldom indulged love of millinery.  I’m not terribly good at it, but I like it!  So I made Lynn McMasters’s Mid-Victorian Winter Bonnet. It all went together swimmingly — there were a few confusing steps in the pattern instructions, but they were relatively straightforward construction elements so it all worked out fine.

The difficulty was in choosing the covering/trimming.  I constantly pick up bits and pieces of ribbon, flowers, feathers, etc. thinking, “This will be perfect for hat trimming!”  But I don’t really get around to hat making/trimming often enough.  So I REALLY wanted to make this out of things from my stash.  However, normally I try to avoid the matching hat, as I feel like it looks too costumey (most historical women probably wouldn’t have had a hat to match every outfit).  But looking through my stash of leftover fabric and possible trims, I couldn’t find anything else to use.  Plus, I had this FABULOUS purple and white striped ribbon that would go so perfectly — the purple was a darker shade, and the stripes were narrower, but that made for interesting contrast.  So I sucked it up and covered the hat with the leftovers of the dyed velvet.  Then I used a lot of the purple/white striped ribbon and some ivory plush velvet to make a bow and other fiddly bits.  It wasn’t quite working until I sucked it up and went to Joann’s and found the white soutache-y trim — until then, it was just this huge expanse of velvet with a bow on the side!  I also bought some short ostrich feathers, which I wired together and curled using Lynn’s instructions.

I really like the finished hat, except when I went to wear it, I found that it really needed a LOT of flat head on which to sit.  Which meant that my hairstyle, which normally would have crossed the top of my head to carry the weight, had to really hang off the back of my head giving me an instant hair headache (yes, I made anchoring buns!).  Oh well, we suffer for fashion, right?

Thanks to Sarah for a lot of these final pictures!  You can see my other photos from our trip to Dickens Fair on Flickr. 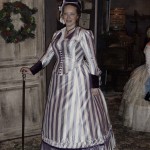 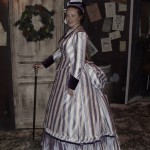 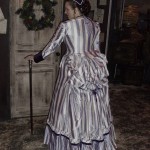 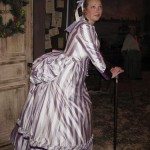 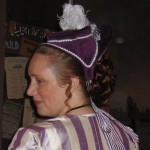 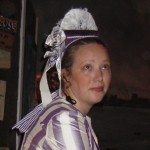 I finally got organized enough to post a picture of my new Dickens Fair skirt – how unexciting! You can see it on my Victorian gallery page.

I’ve been AWOL because I care?

Actually, because of performing at the Dickens Fair! I’ve been having a blast this year, having really hit my stride with my character. I did make a new skirt, and I posed in one Dark Garden (corset shop) window last weekend, and am doing another tomorrow morning – so I will have pictures soon! This weekend is the last, and then it’s Christmas break. While I plan to catch up on sleep and other useful things, I’m also going to get a bit of sewing done too!

I’m excited because I’m going to be going to the SCA West Kingdom 12th Night, especially because I get to hang with my costume peeps who I haven’t seen in a while. I’ll be wearing my new Venetian, and I need to let down the skirt in front as it ended up a bit too short (which means re-cartridge pleating the sucker). MAYBE I could make the partlet and girdle that I’ve planned for that outfit in time? We’ll see. Then in late February is GBACG’s Tudor Feast — I’ve decided instead of killing myself to make a Tudor dress in time, or just not going, I’m going to use this as a perfect opportunity to unpick all the trim on my Florentine so I can fix the evil bodice wrinkles. Hey, it’s 1540s! I’m hoping I can get both things done over break so I can start the new year with a fresh slate of brand new projects!

On Saturday, Cynthia, Diana, Katherine and I posed in the Dark Garden corset shop window. Our theme was the four seasons – see if you can guess who is who! Here are my favorite of the photos.

So, crazy woman that I am… read more about my Bet Dickens Fair costume