Bonjour from Paris!  I’ve been here since Tuesday and already it’s been a whirlwind.  In addition to being on vacation (I leave tomorrow for the south for our two weeks of playing dress-up), I’m also here in France doing research!  See, the research I’ve been doing for years on the robes a la polonaise, turque, and circassienne have been growing and growing.  First they turned into an article that’s coming out this month in Dress (the journal of the Costume Society of America).  But it’s kept growing, and so… I’ve decided it’s a book!

What’s the book about?  Well, partially about what exactly these styles are, how they were cut and what was different/the same about them vs. other dresses of the period.  I’ve been doing tons of research, but I also really need to study more extant dresses and I especially want to take patterns.  So I applied for, and am incredibly excited to have received, some research grants!  I’ve received funding from the Design History Society’s Research Grant, and the Society of Antiquaries London’s Janet Arnold Award (hey, I won a grant in honor of Janet Arnold — how cool is that?).

So here in Paris I’ve just spent a day at a half at the Musee Toile de Jouy, a small museum about an hour outside Paris.  The museum focuses on printed cottons and the history of the Oberkampf fabric printing factory.  They have a dress that I’ve studied before, which belonged to Mme Oberkampf (the wife of the owner), which they’ve been calling a robe a la turque but that I have determined was a polonaise longue – a trained version of the robe a la polonaise.  Confusing, because the polonaise was looped up, right?  Well, one version featured the specific cut of the polonaise but had a long train, and that was the polonaise longue.  Here’s a not-great photo of the dress I patterned: 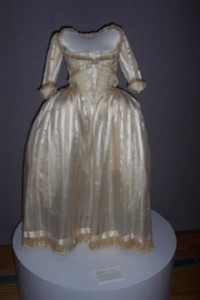 Then this afternoon, I went to Versailles to the chateau of Mme Elisabeth, the youngest sister of Louis XVI, to see the exhibition that is all about her.  Her chateau is very pretty, the gardens are stunning, and it’s waaaaay less crowded than the chateau de Versailles proper.  The exhibition is really nice, with some great paintings of Elisabeth, Marie Antoinette, Louis XVI, and more, plus personal objects of Elisabeth and related people.  And, best of all, there’s a room with about 8 costumes on display, including this tambour embroidered stunner that I think I’m going to have to make, now that I’m a tambour-ing demon (more on that shortly, I promise!): 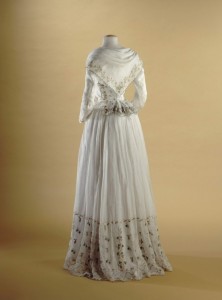 Okay, I have more to write about but I’m exhausted (jet lag!) and I have to get up really early for my train to the south, so more soon!

The Plan for the Coming Year: all 18th century, baby