I wanted to post while I was gone, but as I was on my iPad it got incredibly difficult to upload pictures, and what’s a post without pictures?

SO!  It was fabulous — of course!  Had a wonderful time hanging out with Lisa, got to see lots of things I hadn’t before and a few repeats, tried pain au chocolat from every boulangerie in Lisa’s neighborhood… you get the drill!

And in non-costume related news, I went to the Conciergerie (the chapel to Marie Antoinette is pretty cool!) and Sainte-Chapelle for a Baroque concert.

Of course, most importantly, Lisa and I went to Vaux-le-Vicomte for the evening event and the picnic the following day!  (I already posted the following on LJ — apologies for the duplication)

We got to our B&B (ok, a small 16th c. chateau) with tons of time to spare and so had a leisurely time getting ready. Great hilarity ensued when I tried to get into our rental car with my ginormous wig on – Lisa had to get out while I did a 360 degree turn in order to wrench myself in, and then I had to sit with the seat back.

We got there perfectly on time once we figured out that Lisa’s google maps was set to walking directions. I should recap to say that the original plan for sat night was a dinner and ball organized by the chateau and a French group called Bal de Versailles. However they didn’t sell enough tickets, so the ball was cancelled, and instead they organized a dinner for us as planned, followed by the chance to watch and be extras for the filming of an episode of a french TV show featuring Baroque dancers, plus the chateau regularly does candlelit evenings where they light the whole chateau and grounds with candles and do fireworks.

Ok, so we arrive and this place is jaw droppingly GORGEOUS. OMG. I can’t even tell you. The sun was setting and we got some nice photos in front of the chateau, then wandered over to where our group was eating. They had appetizers and champagne for us, and we met some really nice people and had chit chat.

Dinner was FAB except I was scared of the pate. Great salad, great beef, cheese course – oh yes and now the wine comes out, yay! The sun was setting and the 10,000 candles were starting to glow and I tell you it was MAGIC. I should say they had us on the terrace of the Orangerie with a view of the chateau. Only problem was a storm was coming in – summer storm so the temperature was fine. Had some gorgeous dramatic lightning and then it started to rain just as we were finishing, so they announced we’d have dessert in the chateau.

So we headed inside, immediately to the Grand Salon, which is the main room of the chateau and simply gorgeous. They had more champagne – yay! And the chateau was open to us and tourists alike. So we went through some of the rooms, chatting and taking pictures. The chateau was gorgeous but I was tipsy and giggly enough to not really be able to take it in – no prob, we said, we’d see more tomorrow.

We headed back to the Grand Salon for the filming. We drank more champagne and watched the filming, which was a Baroque dance performed by a professional troupe. It was pretty abut it got a bit long. The funniest part was all the regular tourists outside were peering in the windows at us, so there were lots of jokes about the unwashed masses outside. Just as I’d announced I wanted to traipse thru the gardens, they were done.

So! My #1 life fantasy is to run around a formal garden at night, tipsy, in costume. Seriously.  So out we go, down the steps, and into a magical garden FILLED with gleaming candles stretching about 2 football fields in length. With statues. And formal hedges. And fountains and pools. Seriously, I just clutched Lisa and said “this is so amazing!” over and over. I ran off for a few minutes alone, ran back to Lisa and our friends, ran off for more moments alone. Swung my champagne glass around and thought of Trystan and Sarah. And history. And Marie Antoinette. And various Louis(s), esp My Boyfriend Louis XV. Then I plonked on a bench and did more of the same, when I heard a man’s voice singing French opera. I nearly died. I listened for a while, then got up to head back to our friends, when the drag queen who had attended the dinner came up – he was the singer! He could tell I was loving it, so he serenaded me, all super dramatically, wandering around and clutching my hand, singing about something tragic that I couldn’t follow but loved.

And then it was around 1:30 am and time to go! Back we went for some sleep with plans to meet some of our new friends for the big Journee the next day. Blake and Kristiana invited us to share their picnic which was great as we had only gotten some champagne and cheese so far. We offered to bring dessert so hit the grocery store on the way. Sadly I couldn’t think of how to say “We gave the servants the day off” in French. Then we were off to Vaux again. We both agreed last night had been so perfect we didn’t really need another day – we were tired and we’d blown our wad – but we wanted to continue to build the friendships we had started and hopefully meet some others.

We headed in- had to wait in a bit of a line to get in.  Most of the attendees were in period-inspired costumes, although there was a small percentage of historically accurate outfits.  Most of the men were in 17th c which was new for us and rather hot. Waaaay more men in silk/faux silk, wigs, and makeup which was HAWT.

So we’re tired and our feet hurt already, and now we have a ginormous garden filled with hundreds and hundreds of people. And the thing about 17th c gardens is – there’s no shade. The temp was okay, but still! Shade is your friend! Oh and all the paths were covered with pebbles which is hard to walk on in period shoes. So we start the great trek – for those who’ve attended Gatsby, similar but like 3x as long. We finally spot a tiny bit of shade next to one of the pools and plonck down, declaring we’ll never get up again, and wait for our friends. We realized we had only a bit of bread and cheese, dessert, and a bottle of champagne – and no water. At first we’re like “we need water!” and then we’re like “screw it!” so we drank most of our champagne and ate chocolate eclairs while we waited for the rest. We were laughing that they’d find us passed out drunk covered in chocolate. Luckily they showed up with tons of great food and lots more to drink including water! So we flopped and ate and drank and admired some of the costumes that wandered by and declared our intention to never move again. Saw a troupe of musketeers go by and saw a sword fighting demo from afar. Saw antique carriages go by, said “That would be cool!” and failed to get up. One group of girls came by one of which Lisa knew online and we said hi and admired their costumes but they quickly went off to take photos.

Finally I was tipsy enough and enough clouds had come in to inspire me to get up and wander a but. Took some photos, met a few costumers. Lisa later pointed out rightly how few people even talked costume and were surprised if we mentioned we’d made ours – if it even came up! Such a different event I think than those filled primarily with costumers. Lots more people in 17th c. than you’d see at an American event; also, it seems like many of the costumers are primarily Carnivale people, so that probably explains the period-ish rather than historically accurate costumes.

They were having a costume contest which I idly thought about entering; Lisa had to use the bathroom so we undertook the trek toward the chateau. The bathroom trek was like Gatsby x4. I chatted with some people, took some photos, Lisa came back, and we decided we were done and not to bother with the contest. It looked huge, plus we felt like our costumes were too understated compared with many others. Headed back to our picnic spot, ate some dessert, and decided we’d officially Hit The Wall. Tried to find various friends we’d made on our way out but only found a few. Trekked the endless dying-on-the-overland-trail trek to the bathrooms and the car. Were immensely glad we hadn’t entered the contest as it was STILL going on endlessly. And so we headed back to the B&B for baths and flopping!

Finally, on Monday we caught an early train as I had a research appointment at the Musee Toile de Jouy to study a robe a la turque and Lisa wanted to come along. I wasn’t sure what to expect as this was my first research appointment in France.  We were bummed that the museum was closed that day as we’d wanted to see the current exhibit (on gardens in toile fabrics) which included some costumes. Well, the curator turned out to be faaaabulous – gave us a personal guided tour of the exhibit plus the permanent collection; when she ran out of time she let us go thru on our own. We went to see the robe and it was stunning – I took tons of photos for my research (which I can’t put online). The dress belonged to the Oberkampf family which owned the Jouy fabric manufactury, and it’s the theory that it was Mme Oberkampf’s wedding dress. It was the style of gown I was trying to find so was fascinating for that reason, plus it was the most finely stitched gown I have ever seen. Like, insane. Like, you’ve never seen anything like it.

So that’s the scoop! Here’s a few best-of photos — you can see the full set of pictures on Flickr:  photos from the Paris portion of the trip, including lots of museum images; and photos from the Vaux-le-Vicomte weekend 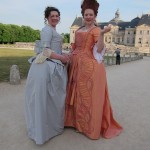 Lisa & me in front of the chateau 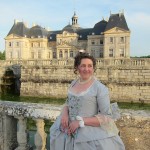 Lisa – she did all that embroidery by hand! 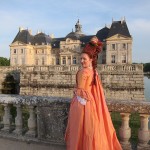 Moi – note birdcage in the hair! 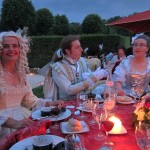 Kristiana in 17th c., a nice gentleman in a Swedish court suit, and a nice lady in a French court gown 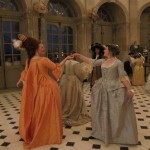 Me & Lisa in the Grand Salon 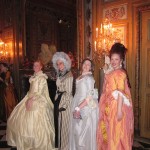 Tina, Irene, Lisa & me in the chateau 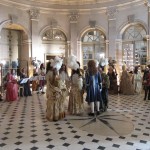 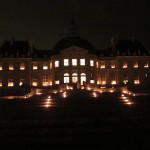 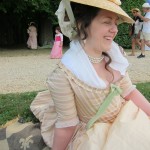 Lisa in her polonaise 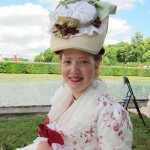 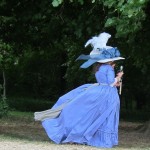 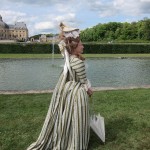 Olympe in her robe a la piemontaise 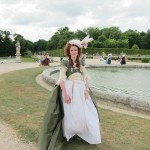 Mathilde in her robe a la turque 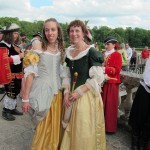 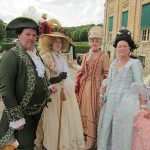 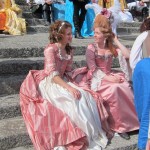