Article About the Eugenie Project

Bridget and I recently wrote an article detailing our experiences with making the Eugenie project for the Silicon Web Costumers Guild’s newsletter.  The issue is now open to anyone, so if you’re interested, check it out:  go here, click on “Current Issue,” then Vol. 8 Issue 4. 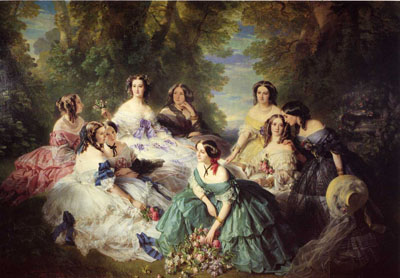 More Updates to the Eugenie Project

Two more members of the Eugenie project have posted dress diaries (okay, it’s been a while and I’m a lagger, but I’m finally remembering to link them here): Sarah Lorraine as the Vicomtesse de Lezay-Marnesia and Trystan L. Bass as the Marquise de la Tour-Maubourg. Both are now linked from the Eugenie project page, so if you’d like to read about more of the gowns, check them out!

Well, it’s taken over a month for the Costume Con 26 official photos to get posted, which means it’s taken me that long to put together my webpages on our project! But finally, we are ready to unveil… the eugenie project! In which a very crazy group of costumers decided to recreate the Portrait of the Empress Eugenie Surrounded by her Maids of Honor (1855) by Franz Xaver Winterhalter. Check it out for details on my dress as well as many of the other costumers’ dresses (a few of the costumers who will be putting up details on their own dresses on their own sites have yet to do so, but I’ll add links as soon as they do)

I should say that this project was born of me finding some green silk taffeta and thinking, “ooo, I want to make that green dress from the Winterhalter portrait!” Then at Costume College a few years back, we were talking about Costume Con 26 and trying to come up with something to do in the historical masquerade. I thought of this portrait, we all grabbed dresses, and then started wandering around Costume College — as we ran into people we knew, we said, “Hey, wanna do this?” and kept going until all the dresses were gone!

It was a bit crazy actually getting everyone done ON TIME. We sadly had one costumer who had to drop out, due to life commitments, although luckily early enough that we could find a replacement. But although there was last minute sewing and getting-paperwork-in-on-time drama, we pulled it off in the end and won Best in Show!

I arrived Thursday morning, checked into my room, and headed off to help install the exhibit by about 11-12ish. The exhibit was REALLY cool, but HA-UGE — I ended up spending eleven hours helping install, and they weren’t even done when I left! It was really fun to look at the various costumes close up, especially because some of them were vintage. My mourning dress (front and back) ended up near the back of the exhibit, but still viewable.

Friday I wore my Bet costume, as it is relatively comfy and silly. That was a busy day – first we had the live, studio audience recording of the Frock Flicks podcast, which should be online in a week or two. From there I went to docent the exhibit for an hour, then ran into the 18th century social, then missed the GBACG mini-board meeting in favor of last minute historical masquerade DRAMA (which I won’t go into, but was major and caused many a melt down).

Friday evening, post-drama, was the Victorian Underwear Social, to which I refused to wear Victorian undies! My undies are boring, sorry kids (except maybe my 18th c. stays, which were on my dress form in the exhibit). Instead I wore my candy cane bustle dress – evening version – and had a lovely time chatting and talking shop with other costumers.

Near the end of the social, Trystan and I retired to our room to host the Pretty Pretty Princess party, which turned out to be the party of the CENTURY (yes, even though we’re only 8 years into it!). Apparently we were the only party going that evening, so we had a TON of people there – many good friends, and a bunch of people who I don’t know. There were many cocktails and much jumping on beds singing “I Will Survive” and other ridiculousness.

Saturday my historical masquerade entry group had to be up at the crack of dawn to rehearse our presentation at 8am – urgh! However we got things together quickly, so that was good. I had planned to wear my black & ivory 1920s dress, only to take it out and find it was stained and needed a cleaning. Oh well, jeans for me! I hit the dealer’s room, lounged around, then taught my draping demo in the afternoon. Later I popped in to the GBACG tea in the hospitality suite, then went to Bess & Teddy’s really, really great 16th century panel.

Saturday night was the scifi/fantasy masquerade – I wore my Florentine which continued to have bodice wrinkles and be generally evil. I didn’t make it too late that night – hit the wall of tired and went to bed around 1am (which was early, compared to most everyone else!).

Sunday was mostly spent prepping for the historical masquerade, with workmanship judging and giving ourselves LOTS of time to get ready. The masquerade itself was amazing – definitely very nervous waiting to go on, but then there we went and I forgot about being nervous. There were a lot of really amazing costumes, although I only got to see most of them from backstage – a really gorgeous late 1860s couple, and a woman who did Mme de Pompadour from Dr. Who. I was most excited about Lindsey’s Venetian and Bess’s Elizabethan gowns, both of which won awards, so that was great!! Our presentation went SO well, I was really thrilled – not only did the audience start applauding when Lana/Empress Eugenie came out, but apparently we had some people giving us a standing ovation when it was over. Wow! Totally thrilling! I had so gone into this thinking about wanting to do something amazing and share it with people and NOT about winning awards, so it was the icing on the cake to not only win, but win something so major. After the masquerade a bunch of us hit the bar. And then it was off at a decent hour Monday morning!

So my review? It’s hard to say! Costume Con’s focus is competition and socializing, vs. Costume College which is educational (in fact, I believe College was founded in order to do something that Con was lacking?). Given that focus, I think it was relatively successful. The main gripe I’d have is that while the hotel was large and fabulous (two mirrors/sinks in the bathroom! yes! lots of restaurant/bar options!), it was so spread out that except for the Social and masquerades, you couldn’t actually TELL there were about 800 people there – I would have thought there were more like 100. The Social did well to bring people together; the masquerades in a way did, but at the same time you’re sitting watching a show, not interacting. I’d almost like to see another social added Monday evening, but I’m sure everyone’s too dead by then and has gone home (I know I had).

The programming definitely was lacking. There wasn’t much of it, and it was scheduled so that many like things (ie historical panels, which was my interest) were scheduled against each other. I know they had some major problems with organizing programming, including technical failures and problems working around people’s schedules (for example, I’d organized an 18th century panel with Loren and Katherine/Koshka, which they didn’t use because of scheduling problems). However, I’d suggest going ahead and scheduling programming for Friday morning (during the ICG meetings) and Sunday during the fashion show (not everyone wants to go – I know I didn’t!). Con moves around geographically and is organized by different people, so this doesn’t apply to future groups, but I wish that CC26 had taken better advantage of local costuming people and organizations to help with programming (GBACG, for one, who volunteered to help many times but was told it wasn’t needed).

However, I did have a great time with the socializing that I did accomplish, and I got to meet and hang out with many new people and old friends. There were some amazing costumes being worn – Loren’s 18th century wardrobe (especially the pink pirate!), Lindsey’s 16th century doublet, Trystan’s 18th c. music gown, Sarah’s red Elizabethan, Jennifer in some gorgeous goth/corset ensembles, Lisa in some beautiful medieval gowns, Katherine W.’s gorgeous Tudor, Jen L.’s beautiful blue 1860s balldress… and many people whose names I don’t know and specifics I can’t remember.

Sadly, I did NOT have the photo gene at ALL for this event – I did take some on Friday but starting Saturday totally slacked. Luckily, there are a ton of photos on Flickr if you search for “Costume Con” or “cc26″ — and soon enough the official galleries will be up, which I’ll post the link to. (I’ll put my few photos up on Flickr, too, just to be thorough!)

Now, it’s time to recover and go back to having a real life!

A much longer report will come soon, but first things first – the top secret masquerade project! A CRAZY group of us reproduced the Portrait of Empress Eugenie surrounded by her Maids of Honor in the historical masquerade – and WE WON BEST IN SHOW!!!!! OH MY GOD!!!! It was an utterly amazing experience – and actually, I was most excited about the audience reaction to it, which was overwhelming.

Here we are – and here’s a video of our presentation. Rest assured that I plan to do a DETAILED write up of the project (including all the gowns!) but it might take me a few days to get that up.

And a much, much longer CC26 report shall be forthcoming!