I FINALLY finished boning the 1780s stays.  You know how you read about how 18th century stays were made by tailors (men), not mantua makers (women), in part because it was thought that one needed a man’s strength to get the baleen into the stays?  Well, I don’t agree that men = strong and women = weak, but I gotta say, sticking that German plastic boning into the casings was HARD.  No doubt, some of my channels were slightly too narrow (they were fine for metal boning, but the plastic is slightly thicker, so it takes up a little bit more room).  Some went in smoothly, and others took MULTIPLE teeny-tiny shoves… so much so that it took me the good part of Saturday to (cut, sand, and) stick in the boning, and my arm still hurts a bit three days later.

I draped and drafted out a strap pattern a while ago… but apparently I am a genius, because it’s not in the pattern envelope, nor is it anywhere else in my sewing room that I can find.  Sigh.  So I draped yet another!

Here’s the stays with all the boning in, draped temporary straps, still no tabs cut: 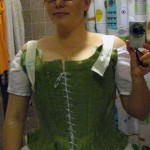 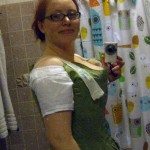 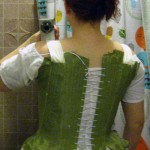