Back From the 18th Century

Phew!  With the first of what will probably be a few posts:

The Costume Accessories Symposium was faaabulous.  So many interesting research presentations, so many lovely people to meet.  Plus, chances to dress up and run around Colonial Williamsburg!

First, my outfits!  Everything came together relatively well.  I finished most of the habit shirt ruffles and cravat on the plane, although I didn’t have sleeve ruffles until day 2.

I had been planning to do cream bows on the Brunswick, but at the last minute came across some vintage blue ribbon in my stash, and had the genius idea to use that instead.  I was seriously not wanting to wear the Brunswick — I was worried I was going to look like a combination of Aunt Pittypat and a butterchurner.  Luckily, when I put it all together I actually quite liked it, and then when I put the hat on, I loved it.  Yay! 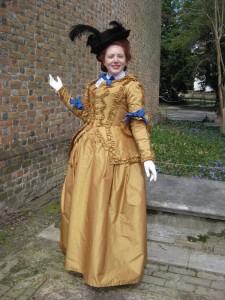 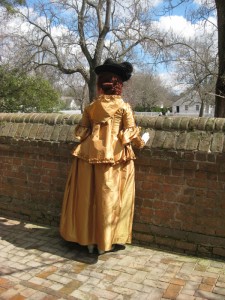 Friday night was an in-costume dinner at the King’s Arms, followed by a chamber music performance, organized by Barbee.  It was really lovely, as almost everyone was in costume, the food was good, and the music was gorgeous.  Both venues were only lit by candles — be still my beating heart!  And afterwards we had dessert at a local home.  I got to meet Abby (shout out:  I had no idea that wasn’t a wig!  We kept calling you “the girl with the fabulous wig,” guess we gotta revise that!) and talk rumps, and Gwendolyn and talk about her work at the Costume Design Center.  I wore my “this old thing” peach francaise. 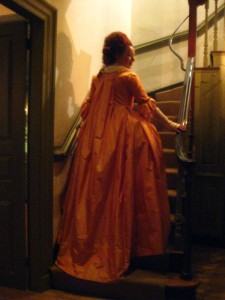 Saturday was riding habit day.  I loved this outfit too, despite the ginormous wrinkle that developed at my bust point (WTF?).  I felt all sporting (in the 18th c. sense) and tailored, and it was fun to wear it with others in their habits(es) as well.  I wore the habit again for dinner on Monday night. 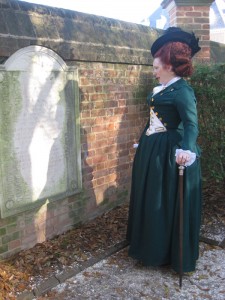 For some reason this picture makes me happy - I feel like an 18th c. woman on the Grand Tour, looking at antiquities! 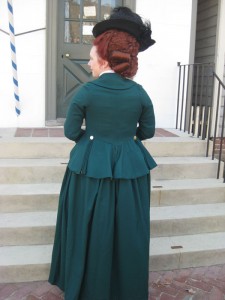 I wore the same hat & wig with all of my outfits.  I really wanted to make one of the black hats with tons of feathers that I see in so many riding habit portraits; I was particularly lusting after Lady Worsley‘s hat.  Thanks to all of your good advice, I ended up getting the wool felt hat blank from JAS Townsend in the largest size they had, which as you can see isn’t large enough to really settle down on my wig as far as the hats in portraits, but it worked.  I did the most craptastic job shaping the brim — I couldn’t find anything in my house that was the right shape, so I used a series of bowls and just moved them around as I steamed the crap out of the hat.  Then I covered it in black feathers, some of which blew weird ways in the wind, but I finally figured out how to attach them so that by riding habit day, the hat was looking like what I wanted.

For the wig, I took apart one I had styled before.  I really wanted that particular style that you see around 1779-81 (example), which is somewhere between a pouf and a hedgehog.  I made a lower form than I normally do for a pouf, and ginormous curls. 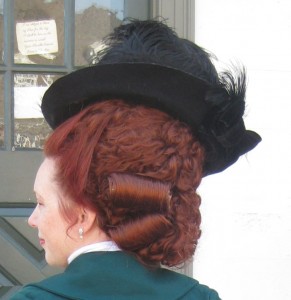 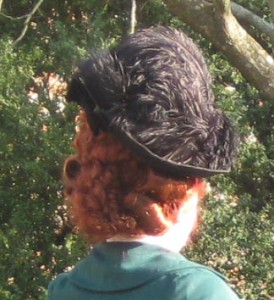 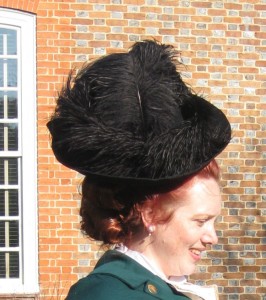 In the next post, I’ll talk about the symposium and the exhibition!  In the meantime, you can see all of my photos on Flickr.

England Trip Report #2: What I Wore (and Made)