After three days of pretty much straight sew sew sew, I’ve got the habit jacket draped, patterned, cut out, and half-way assembled.

It was difficult to decide exactly how the back of the jacket should look, as I can’t find any extant examples of this cutaway style.  I initially decided the back should be cut straight across, as most habits I’ve seen do this… but then when I looked at the pictures, it just looked strange!  So I added a gentle curve towards the CB.

Here’s the mockup, along with the start of the jacket — fronts & backs together, collar started and just draped on to see how its working.  I wasn’t sure if I should stiffen the collar and lapels at all, but I decided to go for it as the stiffening could only help, so there’s a layer of linen/cotton fustian in there.

Figuring out the side pleats was CRAZY HARD.  Thank god for the detailed diagrams in the men’s coat pattern in Costume Close-Up.  Even so, it took multiple attempts, talking out loud, and a call to Francis to get it figured out.  It’s SUPER cool, but super crazy.

My iPhone seems to have decided that my wool is blue, but it really is green! 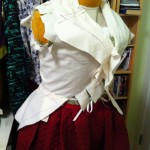 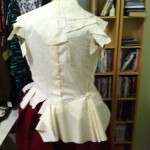 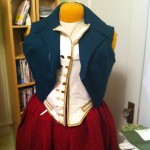