I know, I know! Real Life(tm) has been getting in the way lately, with way too much to do and not enough energy. But I’m finally getting going on this, and I’m usually pretty good at getting a little sewing done most evenings (once I’ve gotten past the work of patterning and cutting), so hopefully there’ll be a little more excitement around this here place.

I did finish the petticoat about 2 weeks ago. Most of it I put together on one summer afternoon when I was supposed to be working on something else…

I wasn’t sure of how I was going to get the right silhouette for this period. 1875 is right in between the big bustles-that-are-really-hoops of the early 1870-73 period, and right before the natural form no-hoops-it’s-all-below-the-knees 1876-80 period. I decided for ease and sanity to go with my 1880s bustle and make as full a petticoat as I could stand to go over it. I used Truly Victorian’s TV 201 1870s underskirt, with a ruffle around the hem (which has cording in the turn-over) and ruffles up the back. The CB is really quite wide so that plus the ruffles really gave me some nice fullness.

The one mistake I made was deciding to level the skirt at the waistband, rather than put in the waistband and then mark the hem. Levelling skirts is really easy on skirts that are the same length all around, and a real bastard when they’re not! Not only was I trying to get the length right at all these different points around me, but I had to deal with the fact that the petticoat would be gathered at the waist. Ugh! Never again! 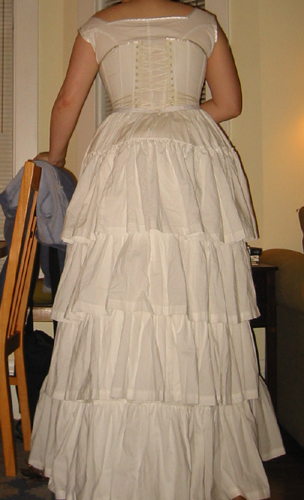 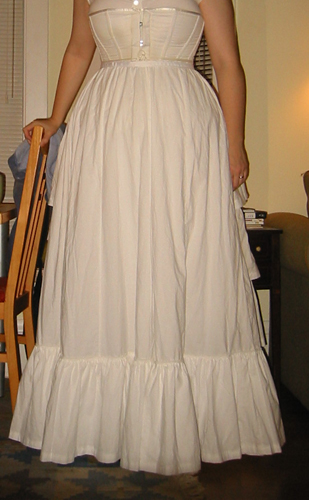 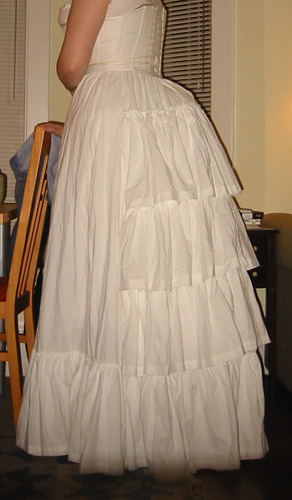 Although I’m still working out the final design (more on that in a minute), I was pretty certain on the skirts so I started there. Also, I want to get a really precise fit on the bodice and for that I need the bulk of the skirts to fit over.

I used the same pattern for the skirt as for the petticoat. The main irritation is that the fabric is off grain, so I spent twice as much time cutting and still don’t really have the fabric on grain. Any suggestions? I tried the fold in half, baste, and then yank method but it’s still not 100%.

Other than that, cutting out the skirt pieces and putting them together (oh, the joys of flooring it on those long straight seams!) was relatively straight forward. I put a side opening in the skirt and gathered it onto some gros grain ribbon (as the waistband won’t show). Still need to put the hem in, but for that I need to twist someone’s arm to mark it for me… I’m impressed at just how full the skirt looks over the petticoat (the fact that it’s made of taffeta helps!). 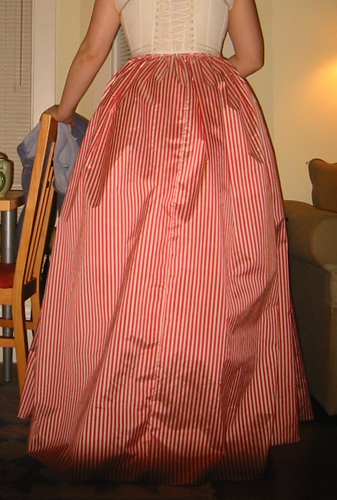 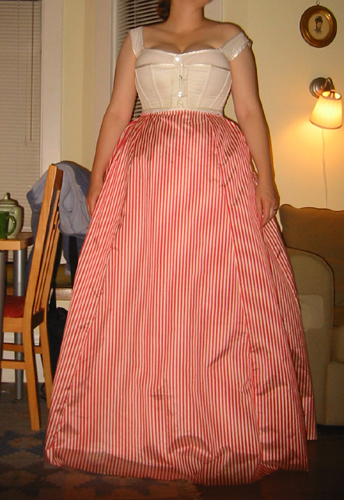 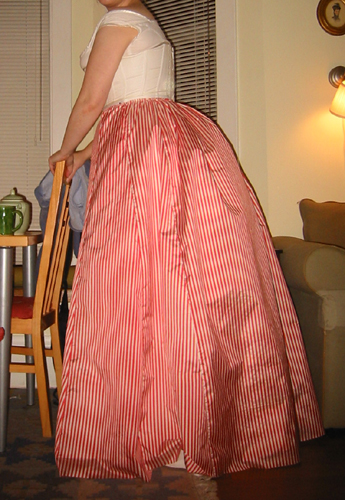 Of course, next up will be trim, and that leads me to — design! I’m still working out exactly what I want to do for the day dress. Here are two REALLY BAD design concepts (work with me here). What I’m not sure about: make the bodice out of the stripes and sleeves out of solid white taffeta, or vice versa (most fashion plates of this era seem to do one or the other). Everything will be trimmed with solid white pleats/ruffles, with layered ruches on top (white ruche on top of red/white ruche), although I am wondering whether the middle of the three pleats on the underskirt should be red/white stripes… opinions? 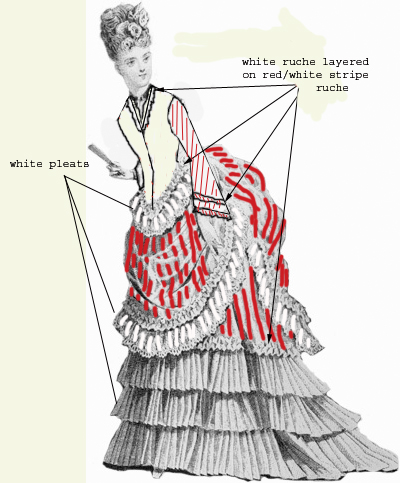 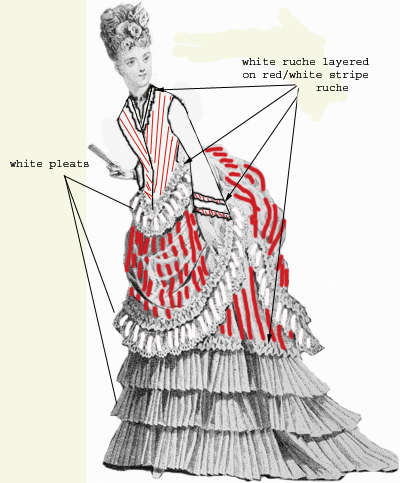