I thought it would be helpful to those making 18th century court gowns for next year to do some posts about the basics.  My interest in 18th century court wear is in the French styles, so I’ll mostly be blogging about those, but I’ll try to include some info on what was worn in other countries (and link to your posts about these topics, so please feel free to post away!).

By the 18th century, women’s court dress had become standardized, with women wearing clothing that was different from the current fashion.  The styles were based on fashionable attire from the late seventeenth century, which King Louis XIV preferred.  This style remained required for formal court occasions until the end of the eighteenth century, when things changed… but that’s another post!

So what did French women’s court dress look like for most of the eighteenth century?  The grande habit was composed of three elements:  the grande corps or corps de robe, the jupe, and the queue.

The “formal bodice” or “dress bodice” was a boned bodice (in other words, no separate stays — the boning was built into the bodice) with a high off-the-shoulder neckline and a pointed, tabbed waistline.  The sleeves were elbow length and made up of pleated lace, with short wings on the top of the armscye. 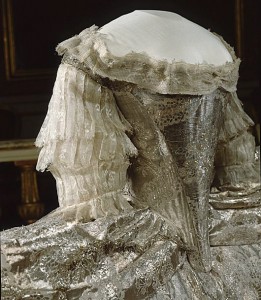 Swedish Queen Sofia Magdalena's wedding dress (1766) is based on the French style. Here you can see the essentially 17th century cut of the bodice, and the pleated lace sleeve. 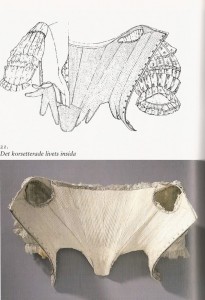 The “skirt” was wide and worn over huge paniers.  I’ve seen references to “medium paniers” and “large paniers,” so obviously there was some room to maneuver (ha ha). 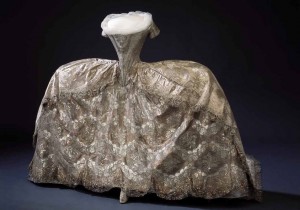 The queue was an immensely long train, separate from the skirt, that attached at the waist. 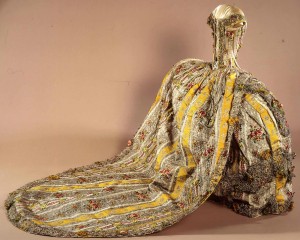 The train on a doll's French court costume at the Fashion Museum, Bath | image via blog.catherinedelors.com

As you can guess from the Swedish dresses, French court dress provided the prototype for court dress across Europe… but some countries (most notably England) wore different styles.  More on those, and the fiddly aspects of the French styles, in the coming weeks/months!  This is just a primer.

20,000 Years of Fashion The History of Costume and Personal Adornment

Isis’ Wardrobe:  How to make a robe de cour in six weeks and hopefully not go crazy, part 2

18th Century Court Project: Luring You to the Dark Side…