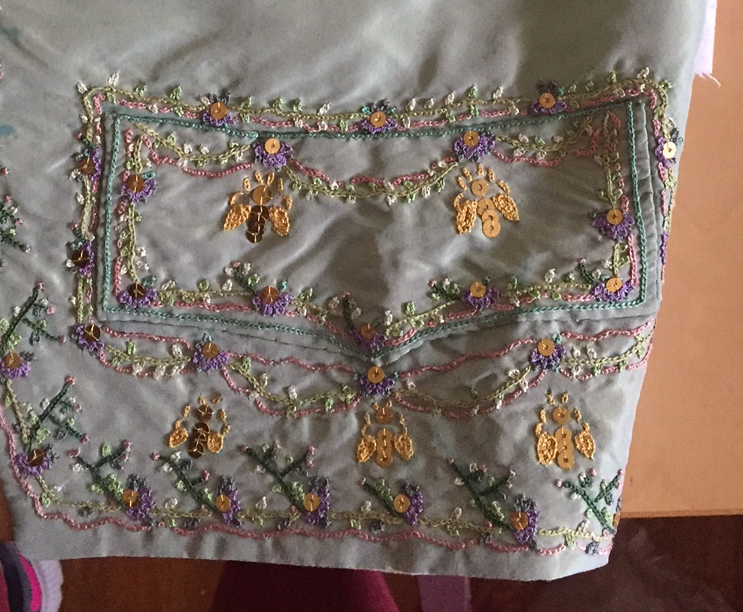 Hey, let’s dust off the old blog to share a project with you! I don’t normally sew for hire, but when my friend Tara was heading to Carnevale in Venice and wanted a hand-embroidered 18th century men’s suit, and I needed the money, a deal was made! She had seen the tambour-embroidered waistcoat I made for Francis, and wanted something similar.

Tara was going to both a Cinderella party AND a cross-dressing party on the same day, so she wanted to go en travestie as a super foppy Prince Charming. She picked out the colors and fabrics. Since tambour embroidery is basically the main 18th century embroidery in my wheelhouse, we decided on that, focusing on this (1770s?) men’s suit at the Victoria & Albert Museum as our model: 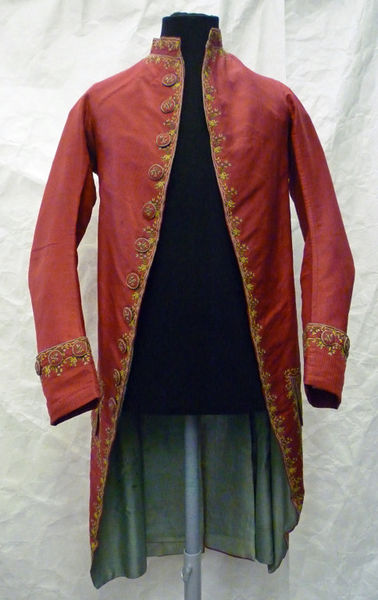 Tambour embroidered men’s suit from the Victoria & Albert Museum. I’d give you a better citation, but someone borked their collection database and I refuse to go through 1000 listings to re-find it. 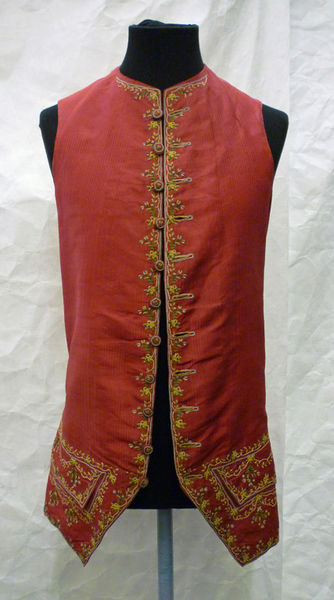 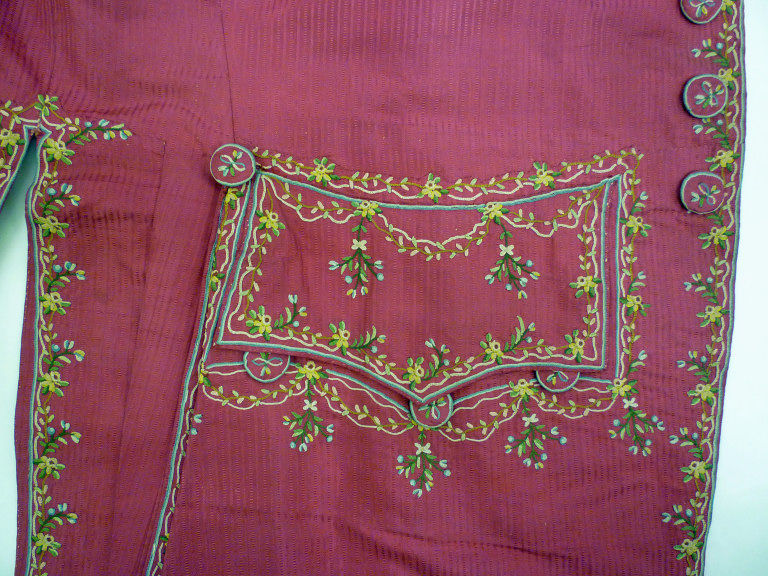 We mixed up the colors and added spangles for shine. Tara’s signature design element is the bee, so I replaced the main floral sprigs with bees made from spangles and gold-colored thread.

And then commenced endless, endless embroidery! 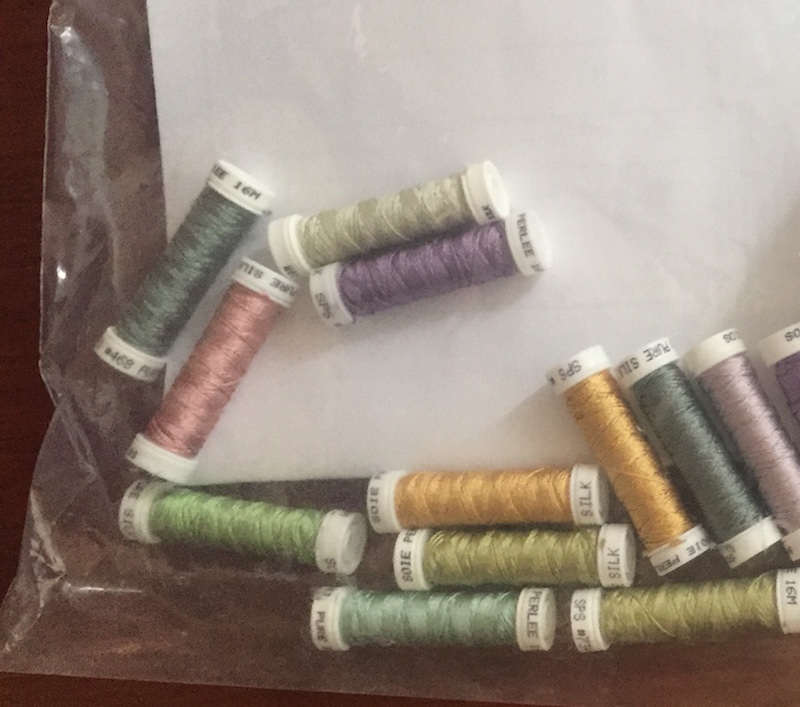 A fraction of the soie perlée used in the embroidery. 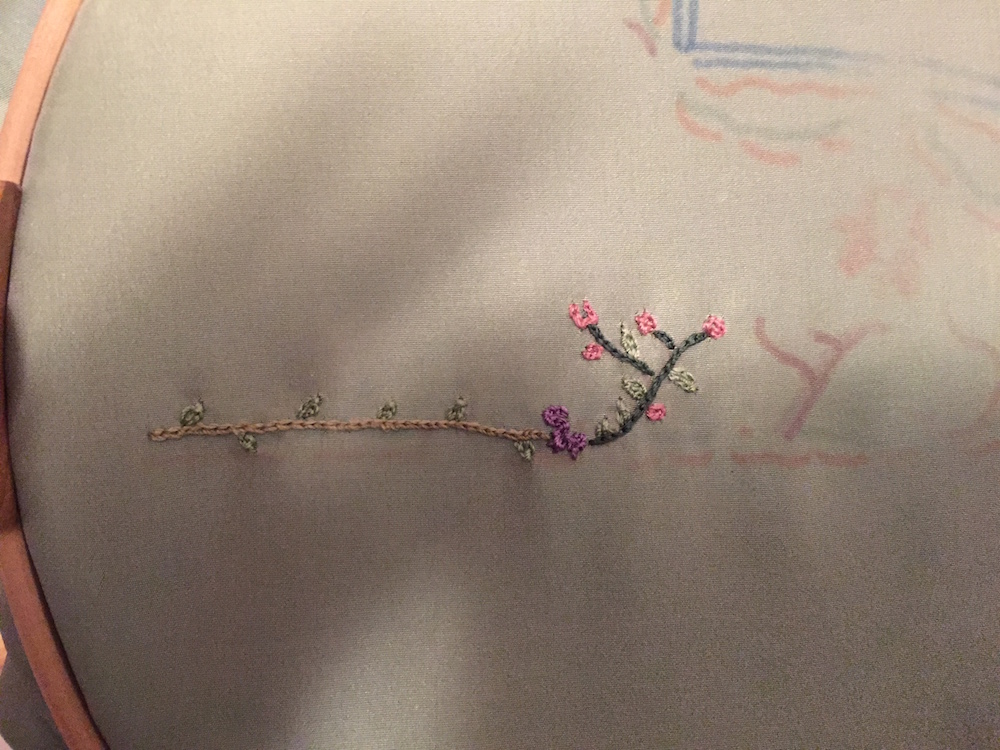 You have to start somewhere… 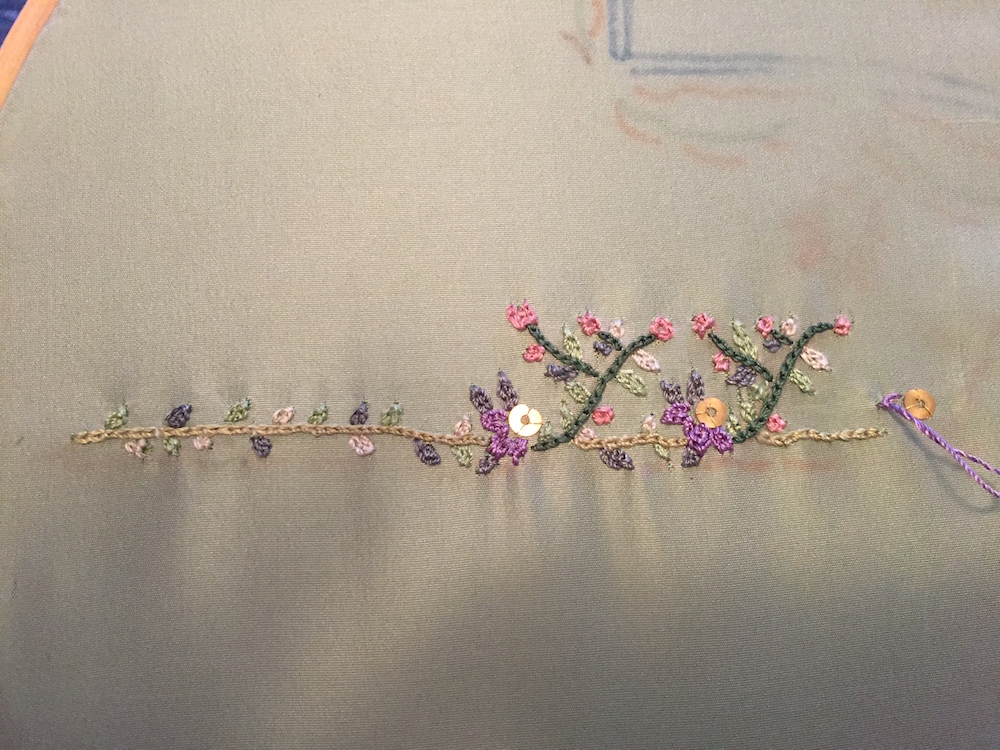 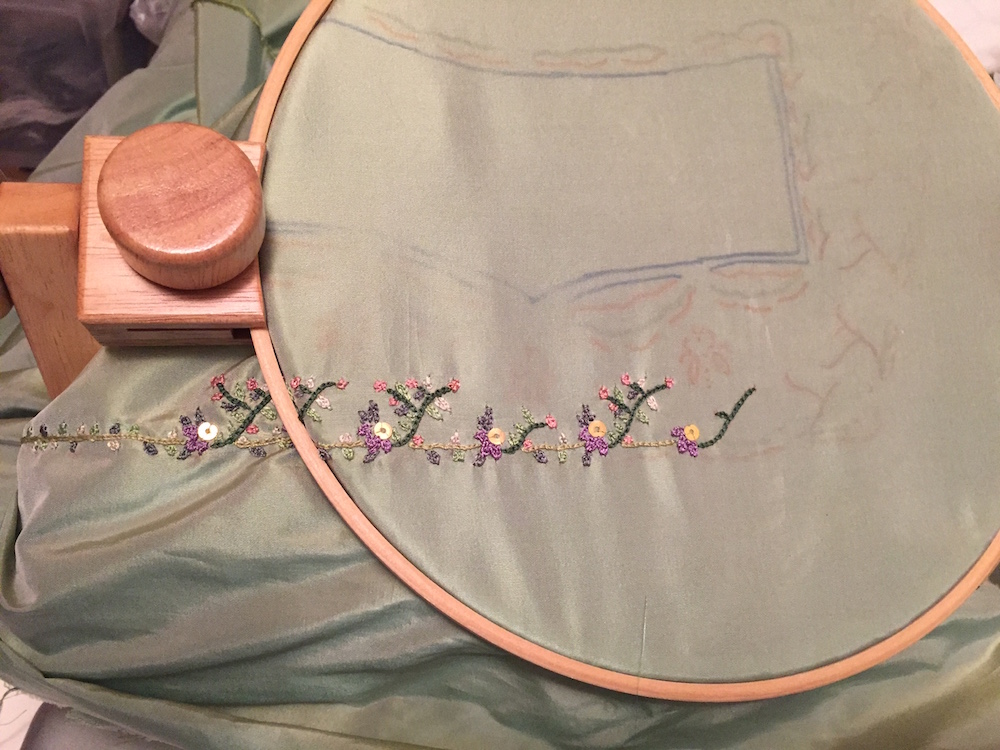 The bottom border of the waistcoat. 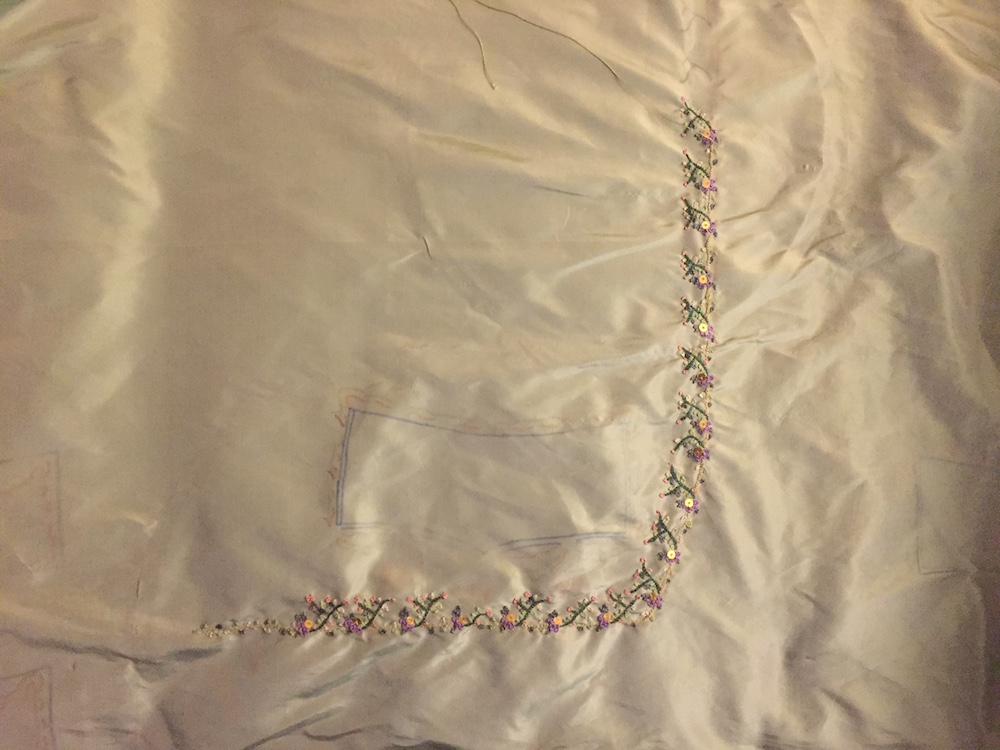 Oh wow, I rounded a corner! 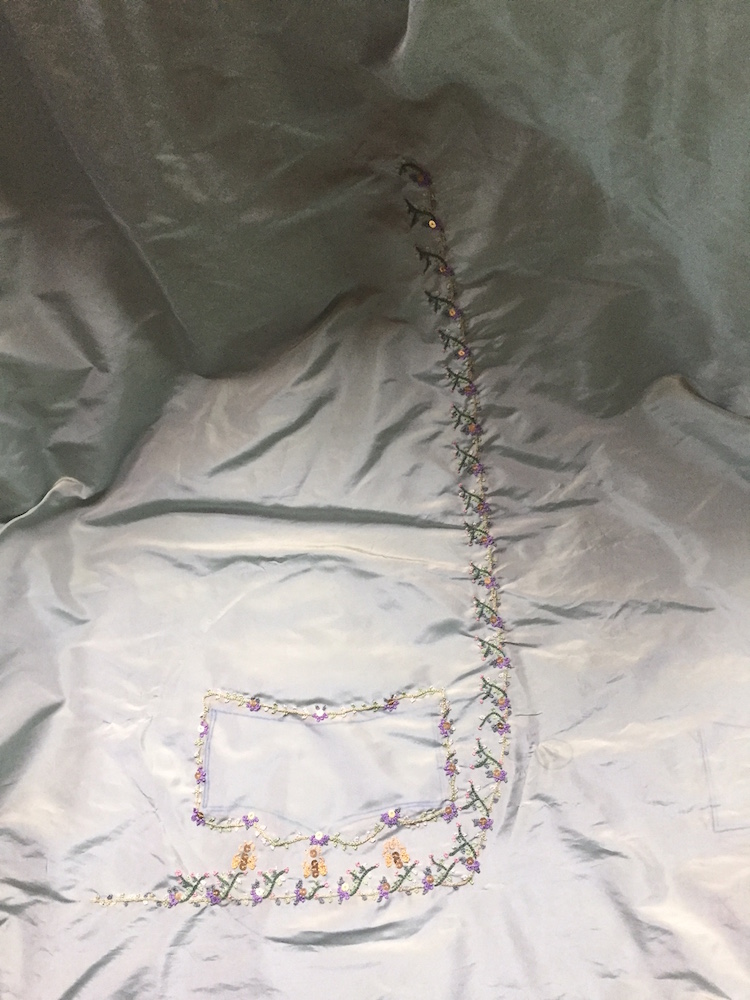 Most of the border, bees, and pocket outline done! Of course, this is just ONE side… 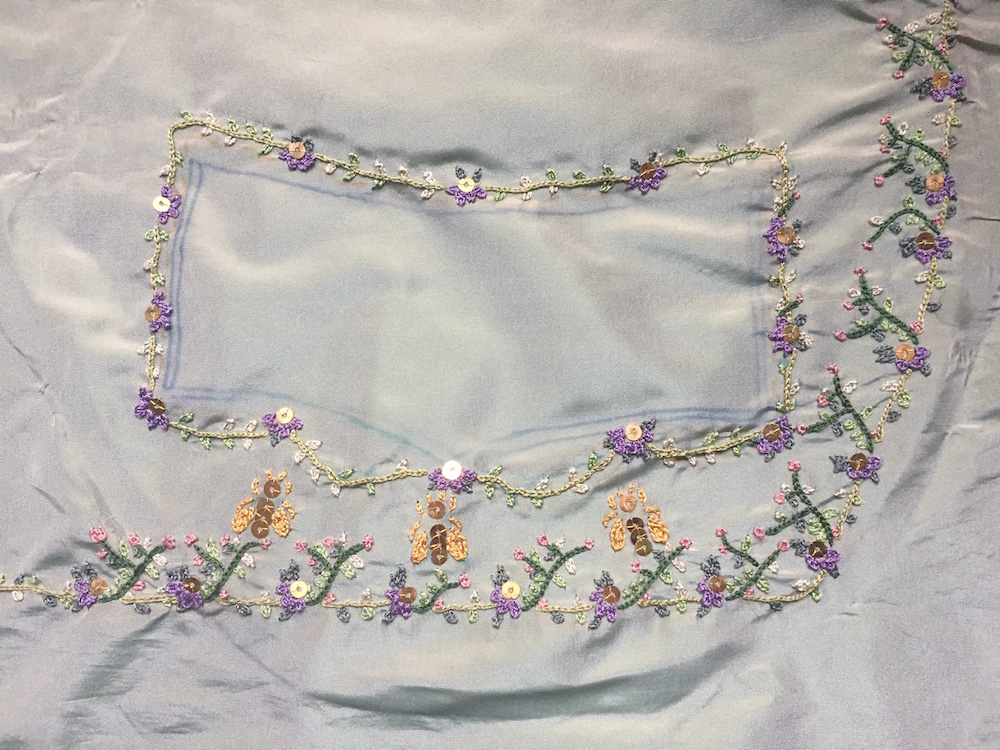 Close-up on the embroidery. 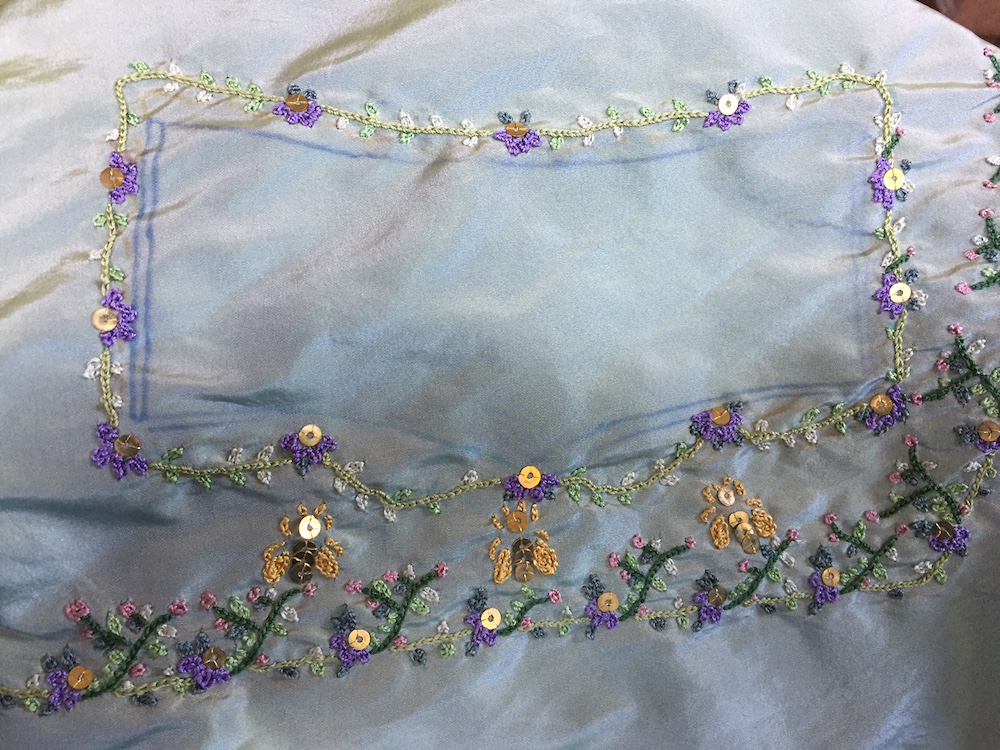 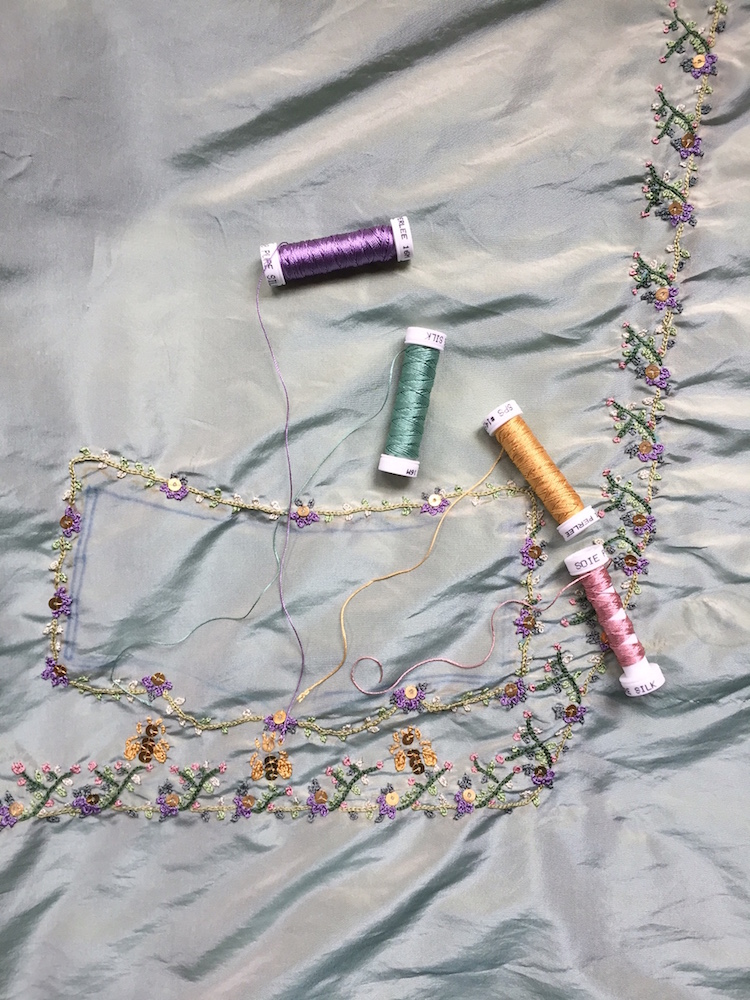 Trying to decide which color to use for an accent (I went with pink). 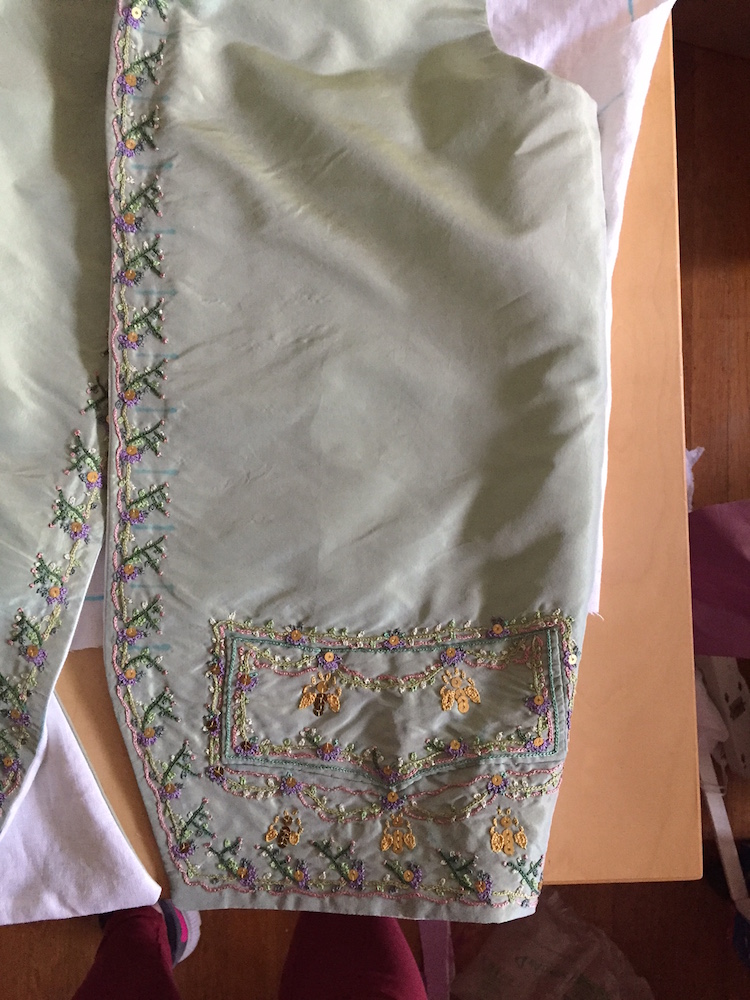 Done, with accent and bee pocket! But before buttons and buttonholes.

Making the suit was CRAZY, so I have 0 documentation, as I was doing all this WHILE MOVING. In fact, I had to call in reinforcements and sub-contracted Sarah of Mode Historique to make the breeches! And then had a total melt-down when the pattern I had mocked up TWICE to be sure resulted in breeches that totally didn’t fit. Cue a whole lot of near-all-nighters while I recut the entire backs of the breeches.

We initially wanted to embroider the coat, but there was literally NO time. Luckily we thought ahead and decided on a purple mini-stripe so that the coat would be interesting on its own, and at the VERY last minute I managed to whip out buttons with embroidered/spangled bees (matching the bee-embroidered/spangled buttons on the waistcoat).

Tara is still in Venice, so all I’ve got to share are these two pictures she posted to Facebook. I’ll post some more, and hopefully take some detail shots, when I can! 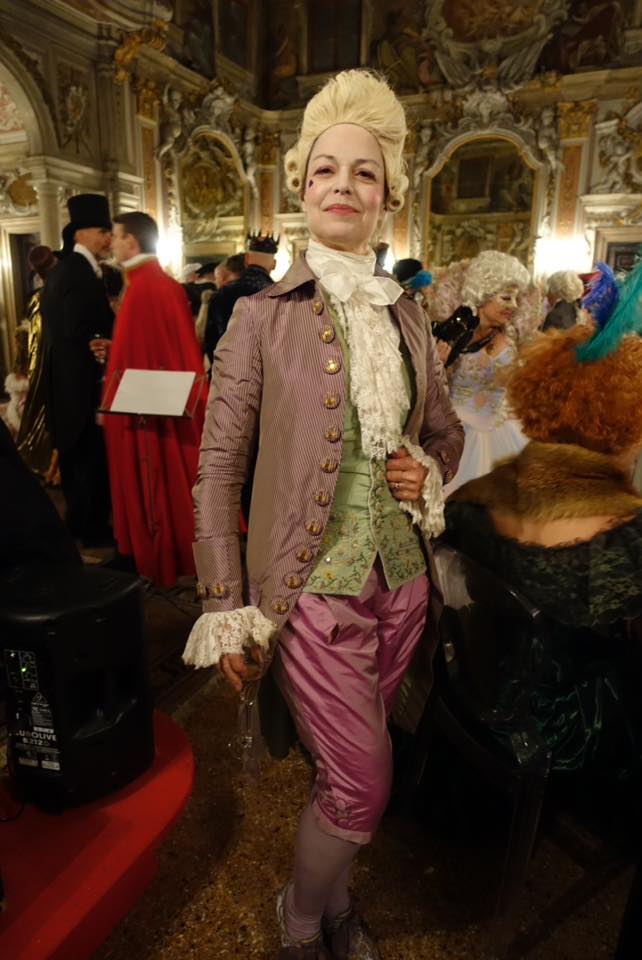 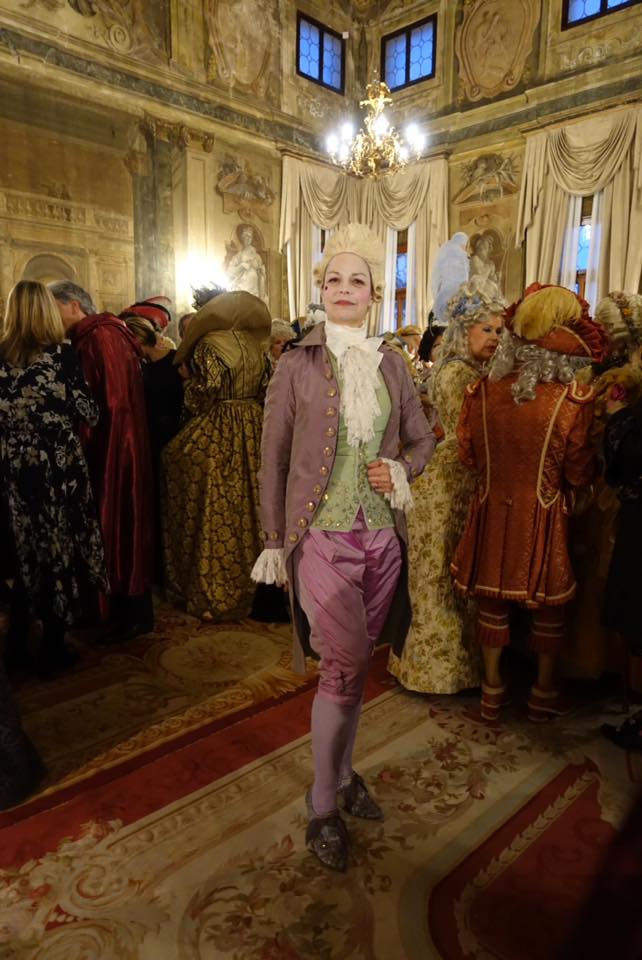 She custom-dyed the stockings and shoes to match, and after a crisis with red hair powder getting onto EVERYTHING (thank goodness for try-on’s), Tara restyled the wig I made her and did a great job!