When I made my first late-18th century gown, I decided to make a bumpad: a bustle pad with knee-length prefab quilting to soften the line over the hips. You can read about why, and what I did, in my 1780s robe à l’anglaise project diary.

As I’ve gotten more interested in, and knowledgeable about, the 18th century, I’ve become dissatisfied with that solution. It creates a nice line for the very late 1780s/early 1790s, when skirts were relatively narrow, but doesn’t give the big foofy effect seen in 1770s and early/mid 1780s skirts. So I decided to make some proper 18th century skirt supports, with the bonus that these will work well as skirt supports for the other big-skirted eras (1660s, 1830s-40s) that I wear.

The bumroll is patterned from the shape recommended for this era by Jean Hunniset in Period Costume for Stage & Screen. Now, whether it’s an accurate shape or not, I don’t know. There is very little documentation on what these pads or rolls looked like, although costume historians tend to agree that they did wear them. The cartoon “The Bum Shop” shows VERY oversized bumrolls and pads, but since it’s a cartoon, I assume that the sizes are heightened for comic effect. There are mentions of these being made of cork, but I decided to be practical and make mine of cotton stuffed with fiberfill.

Now, as to what kind, and how many, petticoats were worn in this era to create this floofy shape, I don’t know. I do know that if they were to be just plain petticoats (without starching, cording, or quilting), there would have to be a lot of them. Since quilted petticoats date to this era, and do a fabulous job of keeping the skirt huge, I decided that that would be my solution. While I hugely admire all of you who have made hand-quilted petticoats, I just don’t have that level of commitment in me right now (or ever?); I did look into buying some matelasse, but decided against spending the money required. Instead, I went with ye olde prefab quilting (cotton broadcloth stuffed with polyester fiberfill) from oh-so-accurate Joann’s. I had originally intended to get ivory, but when that was unavailable I decided what the hell and went with red!

I shaped the skirt panels as in the 1770s quilted petticoat in Janet Arnold’s Patterns of Fashions. I chose this particular source because it includes an unquilted section at the very top of each panel, which is then pleated into the waistband; I really didn’t want to deal with the amount of fabric at the waist that I would have if I didn’t! It all made up relatively quickly, and from trying it on my mannequin it’s doing a great job of kicking my skirts out in the correct shape. 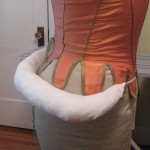 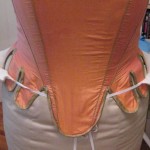 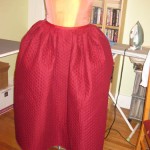 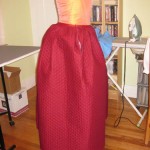 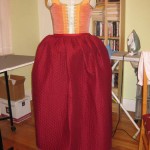