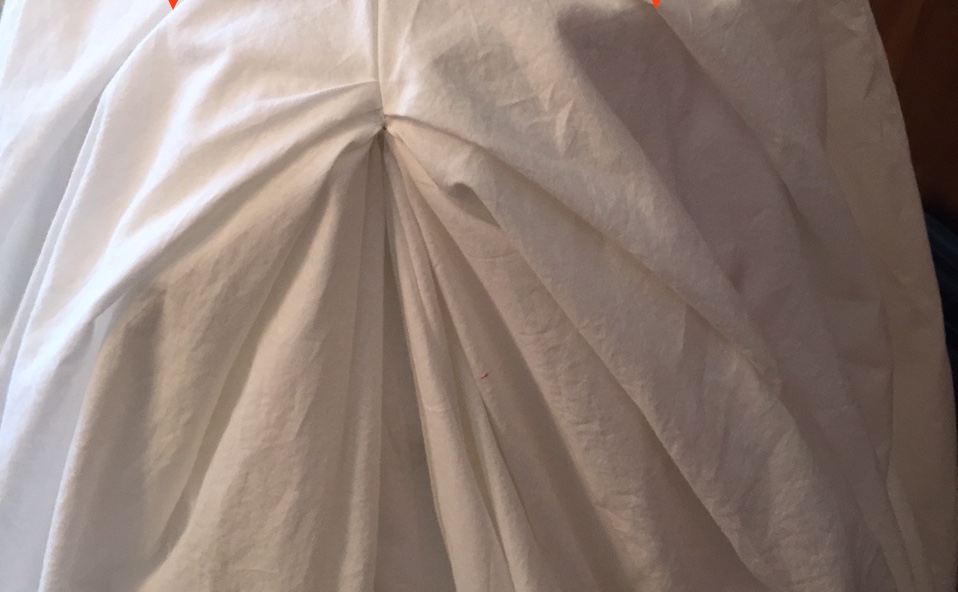 I had my petticoat put together, but one thing was bugging me: the box pleats at each side weren’t perfectly aligned. Now, most of that doesn’t show (and won’t show at all on an under-petticoat! but I thought using this would be a good test run for the real thing)… but the point from where the pleats fan out, right at end of the seam along the top of the panier, does. I kept fiddling with the pleats, both on and off the dress form, trying to get them to line up and fall from that one particular point, and kept failing. So I decided to re-engineer this process slightly. Yes, the side seam pleats of my petticoat look crappy, I was just experimenting so I didn’t bothering to fix those. None of this will show!

Again, I strongly recommend Katherine’s tutorial. My tweak is just to the box-pleat-at-the-end part.

Go ahead and follow her instructions for making the waistband and pleating along the top edge of the panier. Do note that this will probably be on an angled line, unless your panier sticks out completely perpendicular from your waist. Make the pleats along this line: 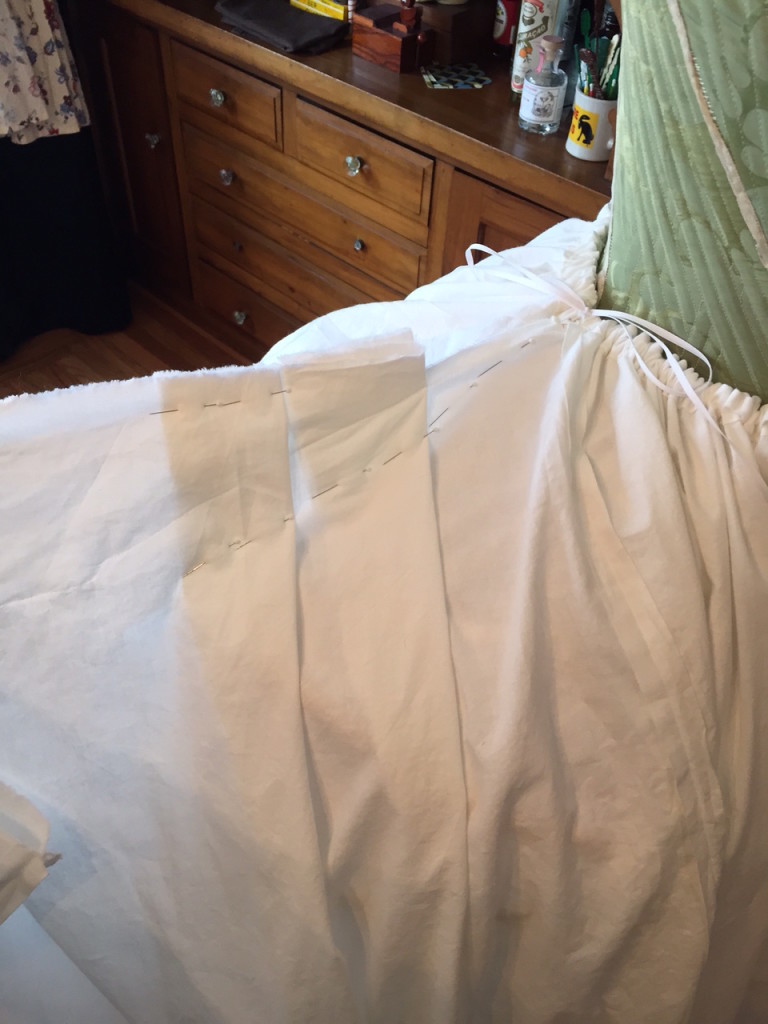 Ignore the top line of stitching, I ended up raising the petticoat slightly and using the lower line. 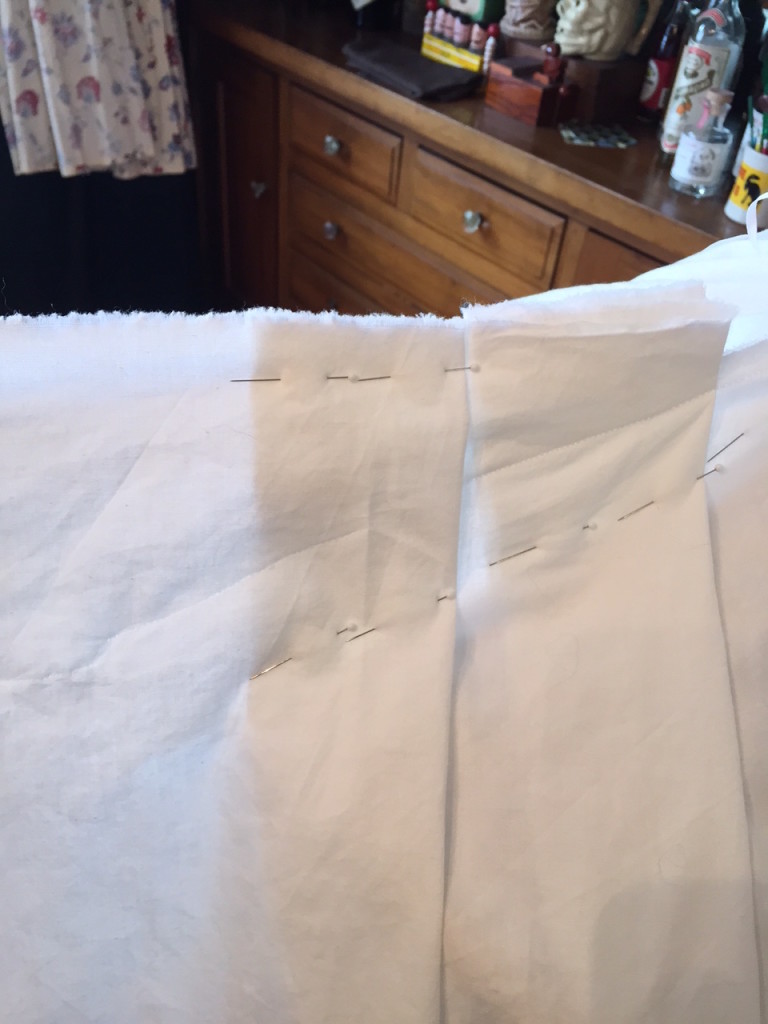 The best way to make sure these pleats look nice is to keep the grain line even at the top edge.

Now, take the petticoat OFF your dress form and sew those pleats into place. If you’re gathering up the waistband, you can sew the two together, which is what I have going on here. If you’re going to pleat up the petticoat to a waistband, you’ll want ties at both sides, and then you’ll leave the front and back separate, but go ahead and stitch those pleats into place. 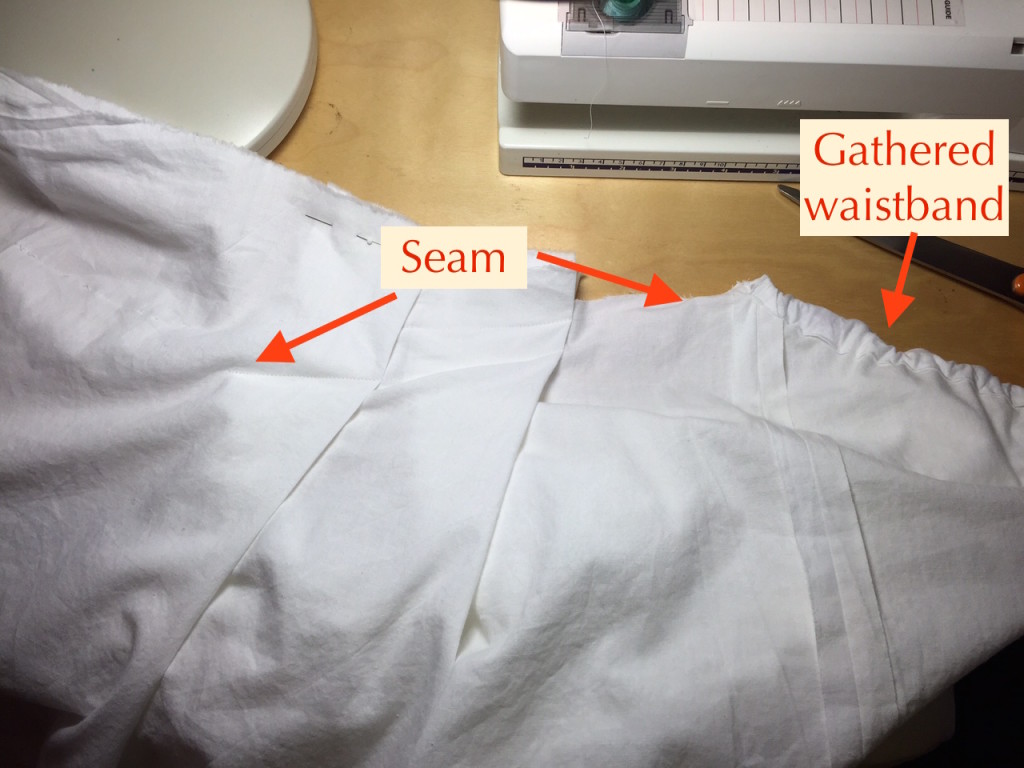 Trim away the excess above the seam you just stitched, leaving at least a .5″ seam allowance. 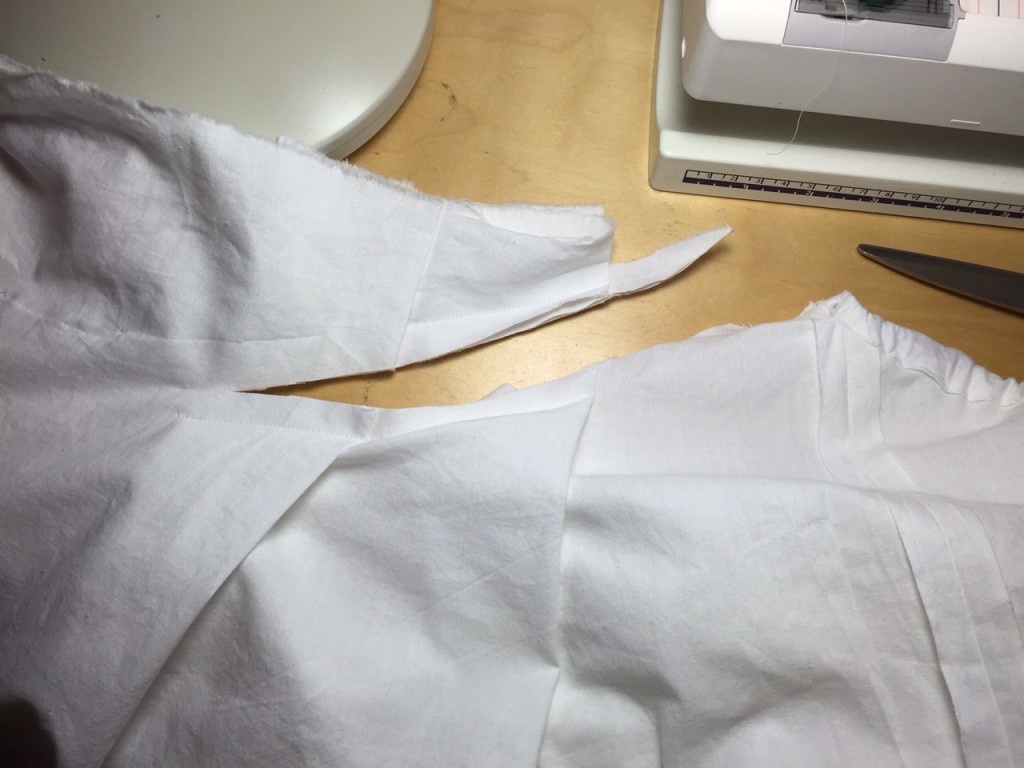 Cut to the exact point where the seam ends.

Then, cut off the remaining fabric at a right angle (ie along the grain line), .5″ (or whatever seam allowance you’re using) above the point where the seam ends.

Now, put this whole sucker back on your dress form & panier, right side out this time. You’ll have a bunch of extra fabric hanging off the side, figure out the exact halfway mark. 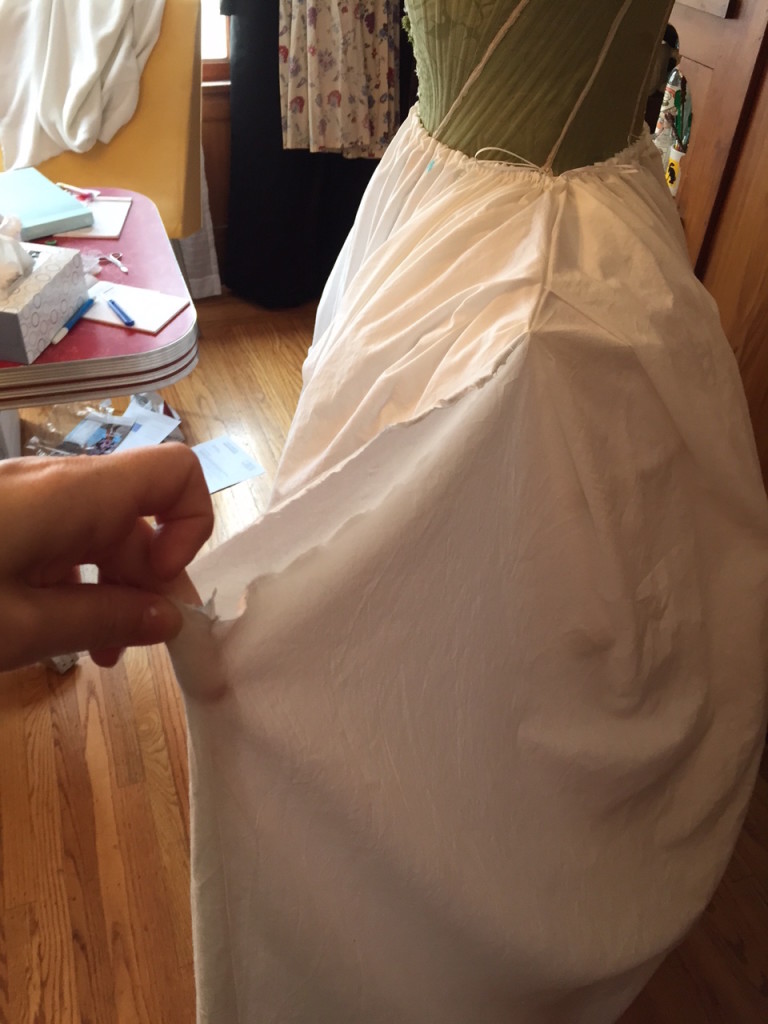 It’s easiest if you have a seam on the side, then you have a clear mark.

Flip the top .5″ (or whatever SA) down inside, on both sides. 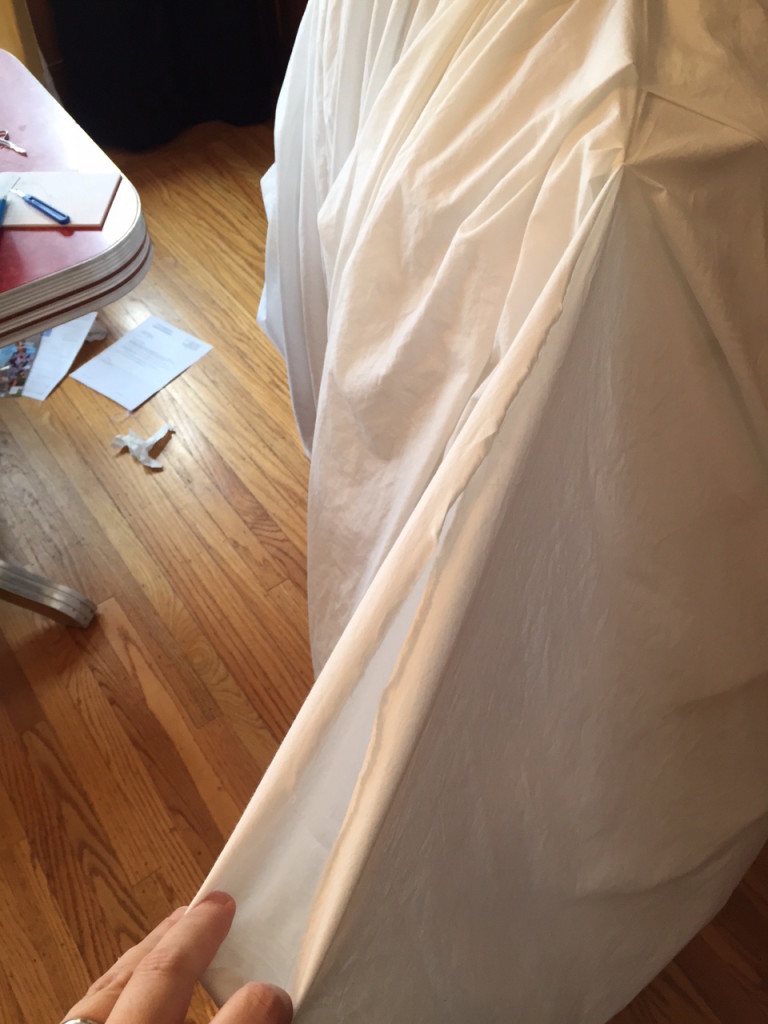 Don’t worry if this isn’t precise, we’ll futz with this as we go.

Figure out about how many pleats you’re doing at the ends (I did 3), and so about how much fabric will go into each pleat. Keeping an eye on the point where your stitching ended, make the first pleat. Work from the stitched end of the fabric towards that halfway mark. 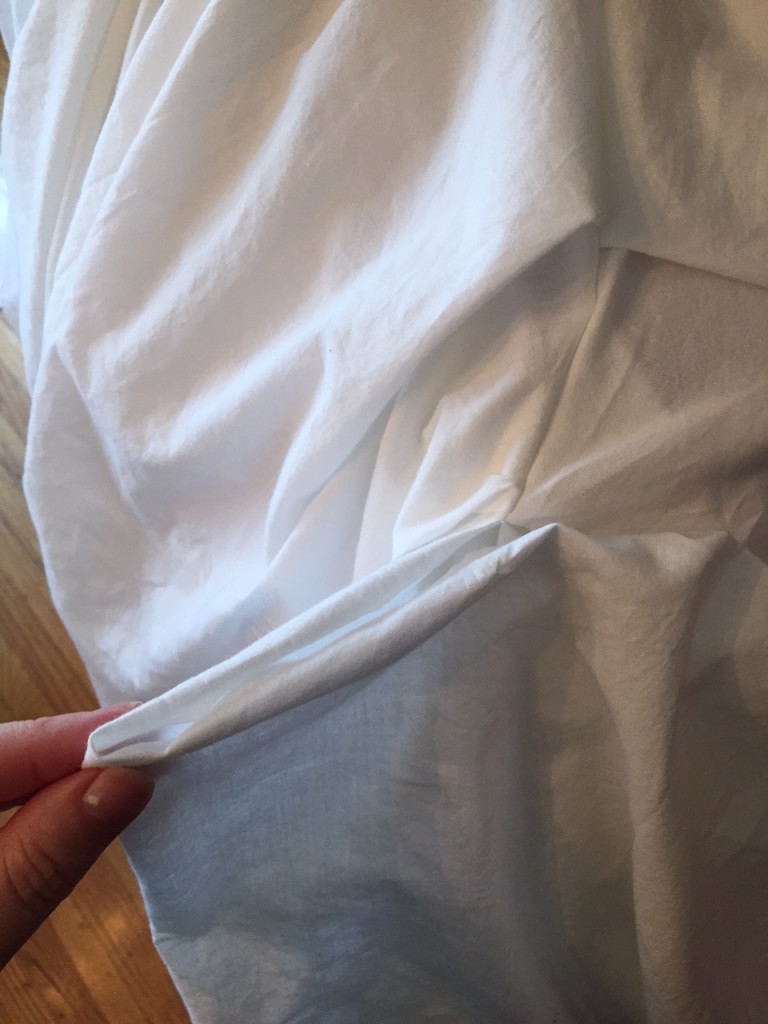 Make sure you keep that seam allowance turned in.

Pin this pleat into place, using a vertical pin right where your stitching ended. 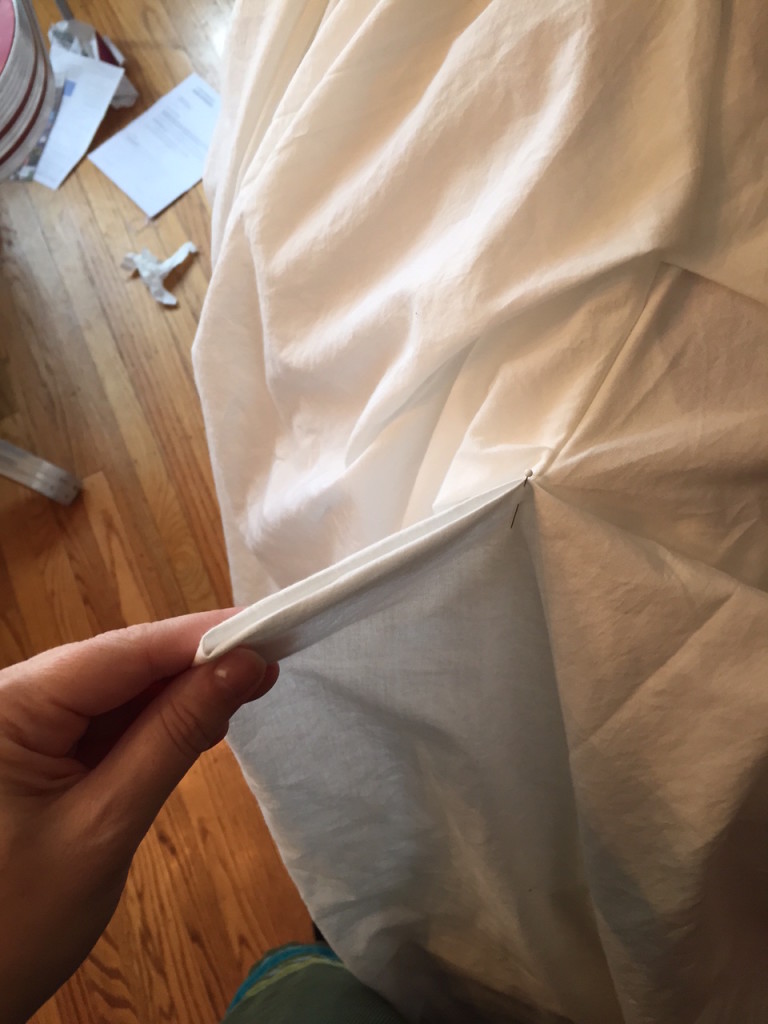 Make the next pleat the same way. Use the same pin to pin both pleats right where your side stitching ended. 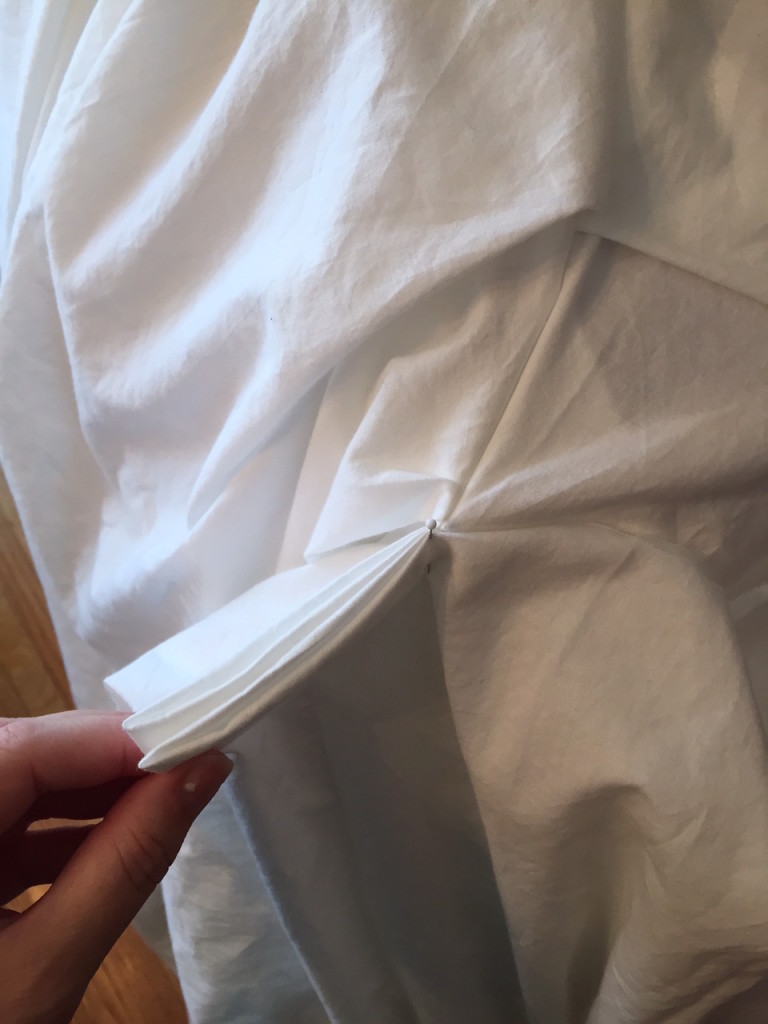 It doesn’t matter if the outer point of the pleats doesn’t line up perfectly, just that center pinned point.

Make the third pleat the same way, making sure that your halfway mark ends up right at the inside edge of this stack of pleats. 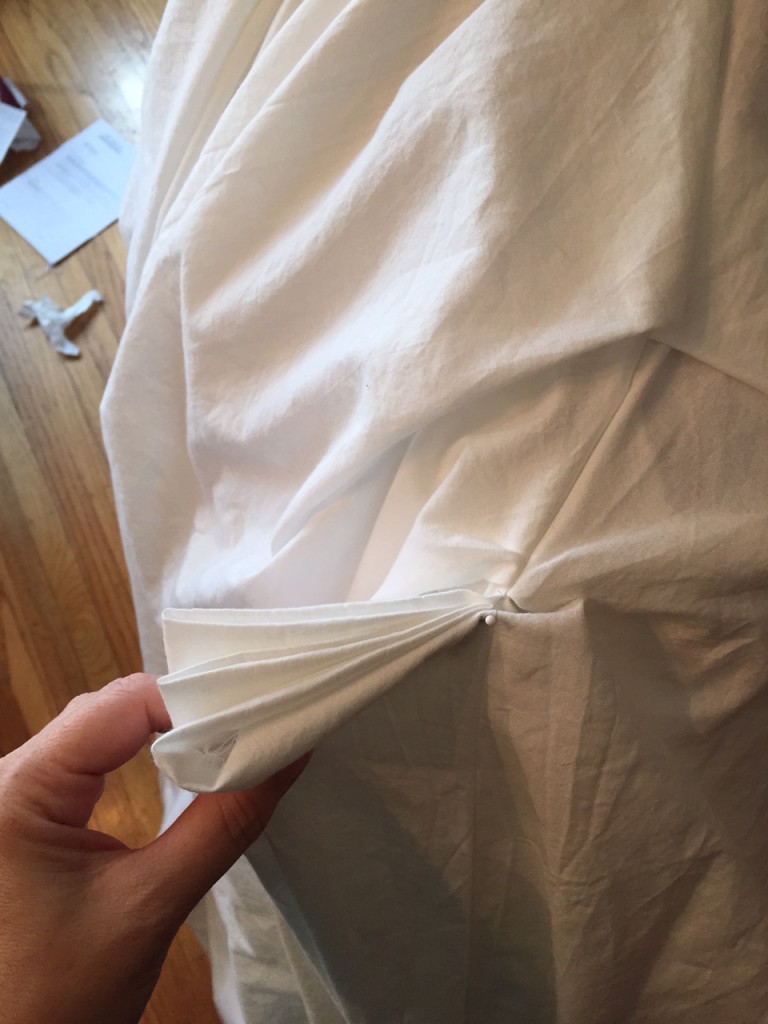 Now, carefully pull out your pin and use a threaded needle to overcast that same point. You are sewing all of these stacked pleats into place at the inside point. I suggest leaving a tail, taking about 6 overcast stitches, and then leaving another tail — tie the two tails together a few times and leave the ends hanging.

Now, take the first pleat you made and tuck it inside out. 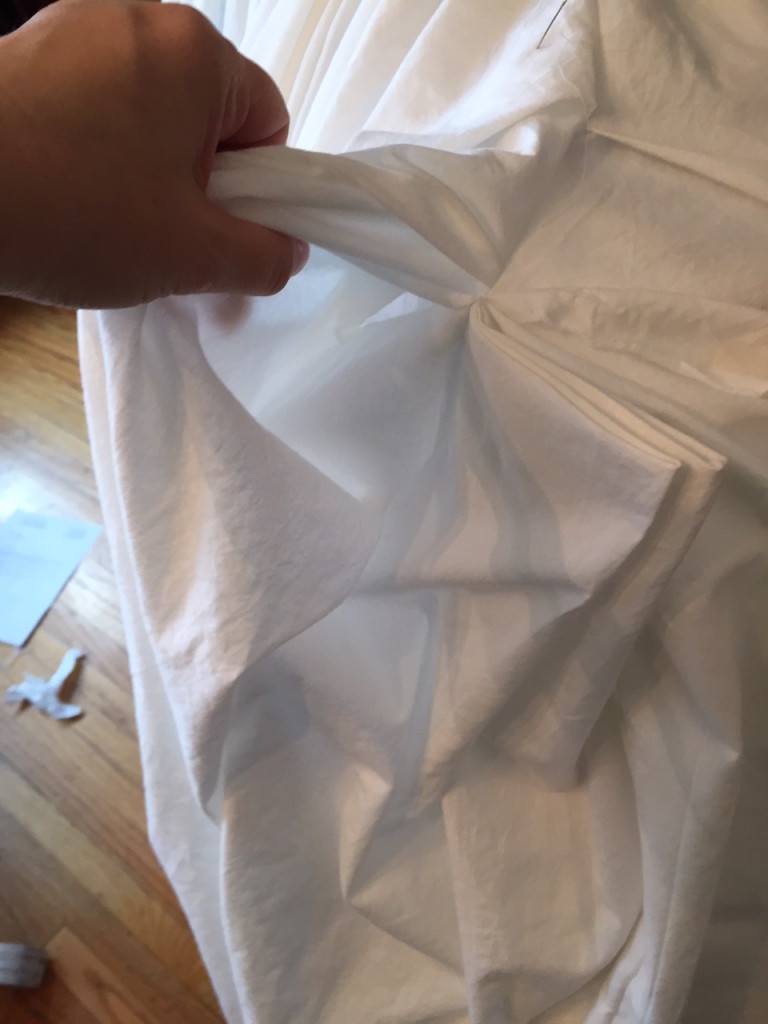 Now do this with the second pleat you made, then the third. Confused? Watch the video below, which shows this process for the other side (ie the order is reversed).

Now, repeat the whole process on the other side: 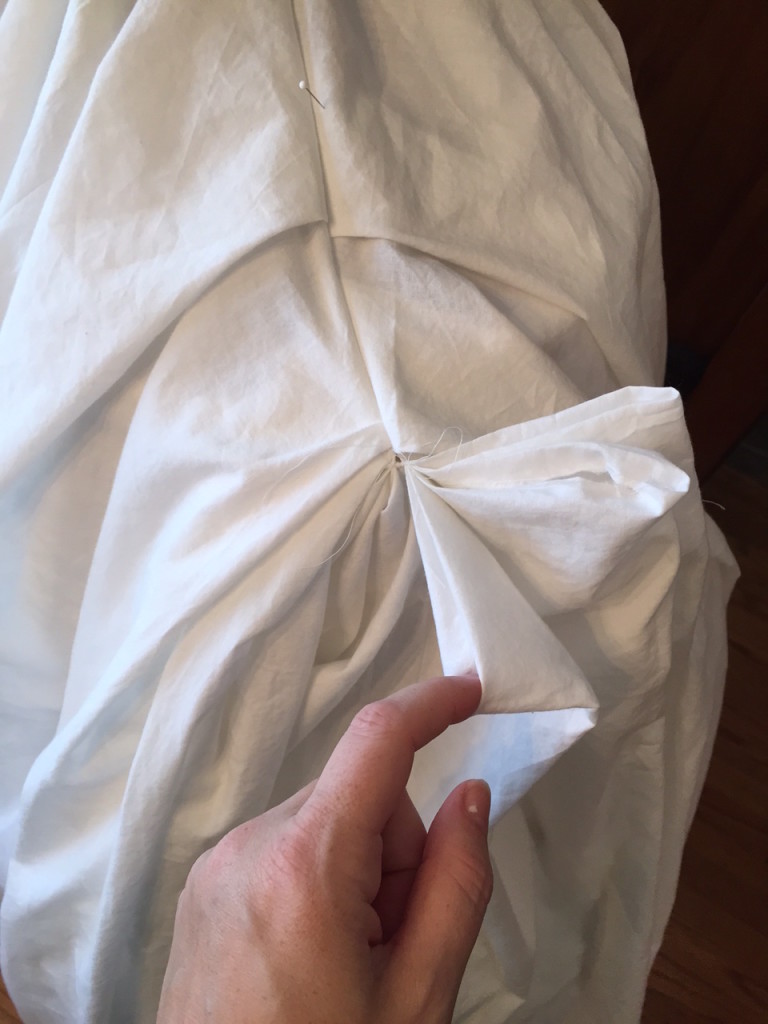 I made the 3 pleats the same way, then did the same overcast stitch. 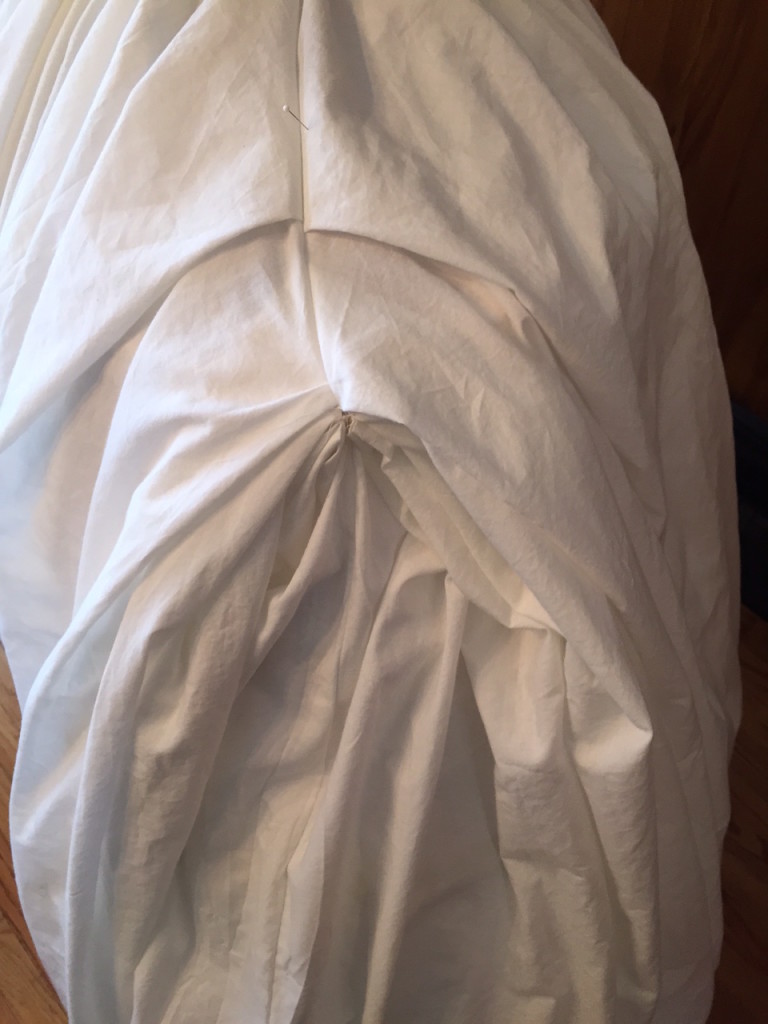 Flip the side of the petticoat up so you can get to those pleats: 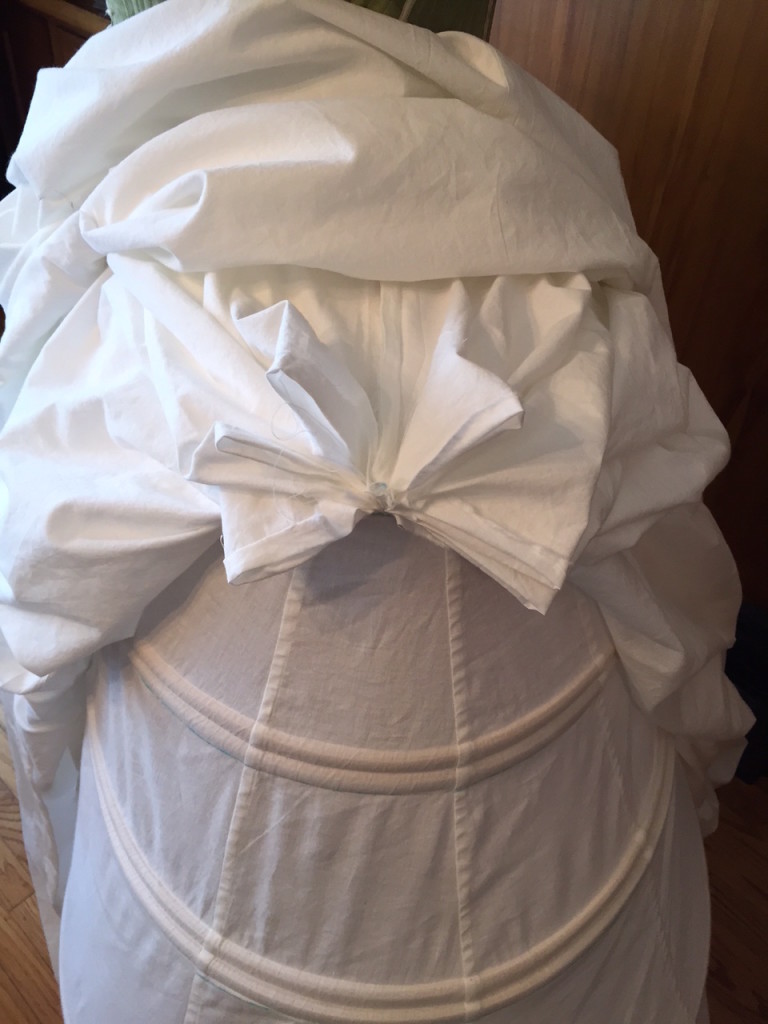 Now’s your chance to check that your pleats are laying nicely, with the seam allowances flipped, at the center stitched point.

Pin the outermost edge of each side of the pleat stacks, then do the same overcast stitch at this point: 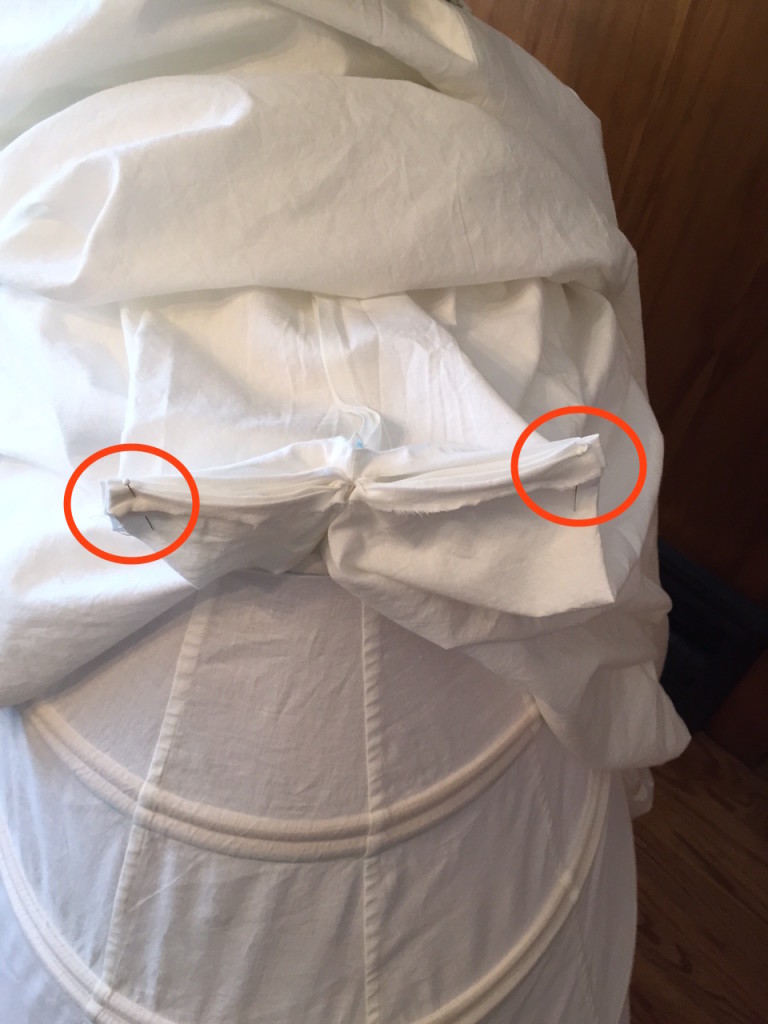 Notice that it doesn’t matter if your pleats are perfectly the same width at this point, no one will see it!

Make sure any threads at the center point are pulled through to the inside. If you still have a tiny hole, you can hand stitch that closed. Flip the petticoat back to right side out. 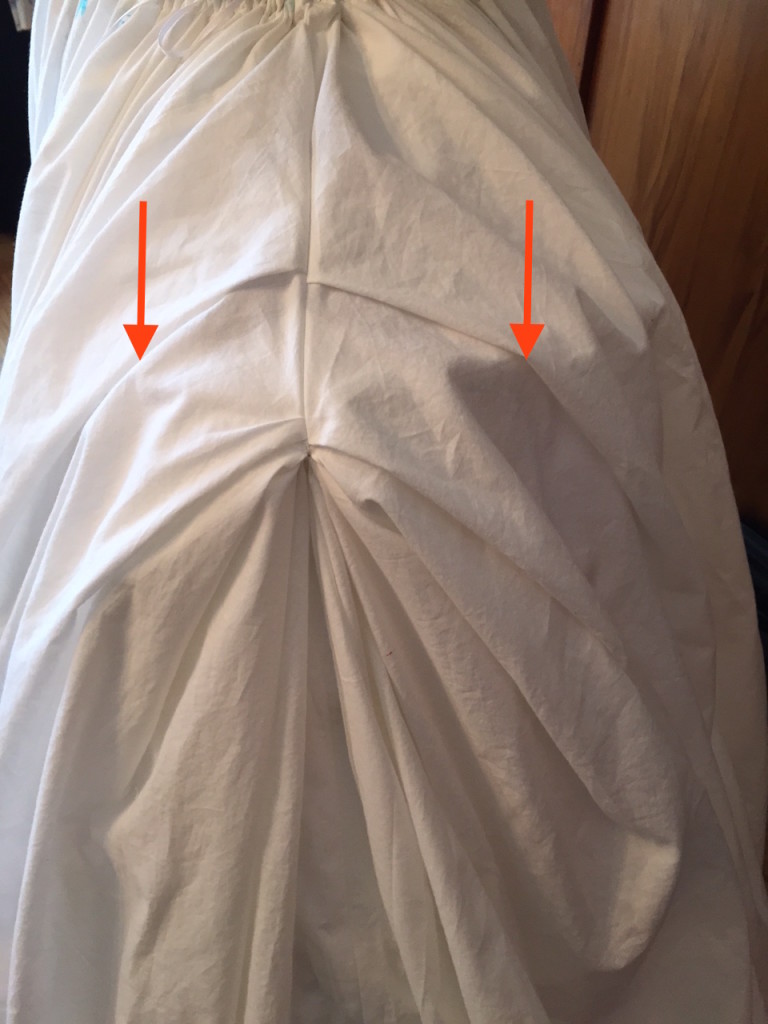 Those outer edges of both pleat stacks are now inside. I’ve marked where they’re laying with the arrows. You don’t need to stitch these any further, just make sure they are laying one front, one back when you wear the petticoat.