Winter Break Is Upon Us

Which means it’s time for the sewing room to get cleaned and used!  I’ve been knitting a lot lately — it’s cold and I’m lazy, and knitting requires no getting up off the couch.  I’ve finished one mitt, from a very modern pattern, that will be used for 18th century, but now that I have almost two weeks off, I need to get more ambitious.

A medieval and/or Pre-Raphaelite dress, for a Pre-Raphaelite event.  I’m torn between doing something very historically accurate so that I can use it for SCA purposes, or going all Waterhouse-y because hey, no one’s going to kick me out of an SCA event for not being historically accurate!  I have some silk damask drapery sheer fabric (it’s weird, you can’t tell that it’s sheer until you hold it up to the light) that I’m thinking I’ll use, lined with linen.  I’m going to hire Sarah to drape the dress on me because it needs to be draped on the body, and my arms aren’t that long.

A man’s Elizabethan outfit — shirt, trunkhose & canions, doublet, and hat.  Sit down for this one – my husband is going to get gussied up for a 16th century event!  Oh, and HE chose the puffy pants option over Venetians!  Color me shocked! I’ve ordered the Tudor Tailor pattern as hello, boy clothes are not my forte, but until it shows up I can’t do much except for the shirt.

Those are the two things I NEED to make before May, and is probably more than enough!  So I won’t continue to ponder new 16th century and 18th century outfits for myself.  I am debating whether I want to make a machine-made version of my new 18th century stays, as the handsewn-outfit-from-hell Maja project is going to get pushed back to summer/fall.  I did start hand sewing a new 18th century shift, then realized halfway through that it was ridiculous to hand sew a new shift when I desperately need one NOW, and it will get a lot of heavy wear & machine washing.  So I finished it on the machine!  I’ll make the handsewn one once the Maja dress is actually made.

Cutting the Back, Putting Together the Robe 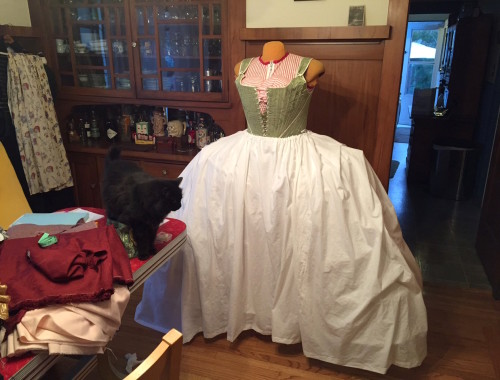