Last night was the annual PEERS Vampire Ball, which is one the few balls I still get excited about!  It’s in a great venue (an Elks lodge that has a beautiful look) that’s about 3 blocks from my house, plus people really go all out with the costumes — over the top historical, vampire/goth, scifi, fantasy, and hybrids of all of these.  There’s so much eye candy, and that’s the best part!  Plus there’s not only historical dancing but also a goth club with a DJ, so you can get the best of both worlds.  Okay, and 2 bars.

For the past three years, Bella Donna has performed two 30 min. song sets at the ball, which is always lots of fun.  We’ve rewritten all of our English songs so that they’re vampire focused (so, for example, “Sweet nymph come to thy lover” becomes “Sweet prey come to thy vampire”), and it’s fun to get to do something different than our usual Renaissance show… and we get to wear whatever costume we’re in the mood to wear!

This year I was thinking about wearing the Marie Antoinette dress, but it’s so huge that it would be hard to get into singing formation with the group and I certainly couldn’t do any historical dancing. So I decided to wear the Maja fancy dress costume, but I wanted to do something different with it. I came up with the idea of doing a Pierrot makeup, in line with the whole black and white theme.

To do the makeup, I used Kryolan Supracolor again, and made my illustrator husband do the black/detail work. Everything went swimmingly until I went to power the makeup, which you need to do to set it — I was using a brush and all the black smeared!  So I had to do a bunch of repair work, which was super annoying… I’m not positive what the best way would be to powder when you’ve got more than one color going on, does anyone know?  I ended up using a power puff and just pressing it, but it still smeared a bit. 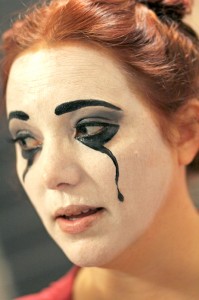 I wanted to do a new wig, and decided to try a 1760s tete-de-mouton just to do something different — something along the lines of this. I used a pretty ratty wig that I’d cut to be a hedgehog, so the hair in front/top/sides wasn’t quite as long as it should be to do full justice to the curls across the top of the head… and I ended up doing things a bit backwards, in styling the front before the back, so had to do some curls at the side/back top to pull things together. But it was interesting to try something new, and now I know what to do differently next time! 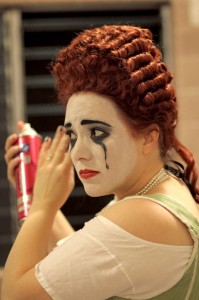 The clearest shot of the wig I've got, which isn't very clear; or, yes, aquanet is period!

I ended up recovering a mini-tricorn form and trimming it the vintage b&w ribbon I bought at Hyman Hendler in NYC. 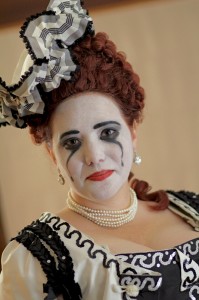 The ball was fun and I had a great time seeing new and old friends, although I didn’t do ANY historic dancing — bad me!  Instead after our singing sets were over, I pretended to be goth with some of my Bella Donna friends in the club room and had fun doing swoopy dances and “catch the bat, release the bat.” 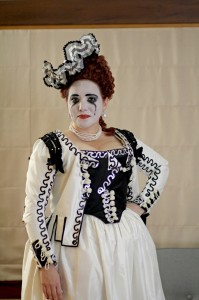 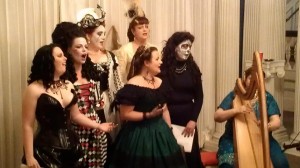