It’s been a crazy busy fall, what with work being busy plus TONS of Bella Donna performances.  Which accounts for my lack of posting around here, plus any court dress emails I haven’t responded to!

I did make something new, crazy me.  Bella Donna performs every year at the PEERS Vampire Ball, a fabulous event that is always right after Halloween.  It’s in a gorgeous hall and everyone brings out their gothy/historical best costumes.  We generally do two song sets of vampiric songs — we rewrite a lot of our English 16th & 18th c. songs into vampire lyrics, and this year we performed Thousand Years by Christina Perri (used in the most recent Twilight movie) and Love Song for a Vampire by Annie Lennox (from the 1992 Bram Stoker’s Dracula movie).

Usually we all wear whatever we’re in the mood for, but this year Karen had the crazy idea that we should do a group costume and go as the various characters from the 1992 Bram Stoker’s Dracula movie (the one directed by Coppola).  This was relatively crazy given how busy we all were, but it was such a good idea, and some of us had things already on hand that would work…

I went as one of the three brides of Dracula, along with Shawna and Tara.  Shawna and I bought ivory and gold cotton saris from Utsav Fashion, and I whipped them both into basic dresses.  For Shawna’s, we copied the dress worn by the redheaded bride in the movie; for mine, I just futzed until I liked it. 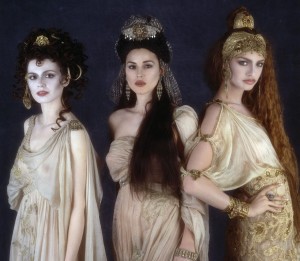 Part of what made the costume seem do-able was that it was so simple, but of course you know me and hair — if it doesn’t have complicated hair, then I’m not interested!  So I immediately decided I wanted Monica Belluci’s fabulous high/braided hairstyle with cool headdress and veil.  So I bought a REALLY long wig and a bunch of half-braided pieces in a slightly darker color than I normally wear and got to work.  Things were going smoothly until I had to go on a work trip and left my bag that had all the braided hair, the headdress, my jewelry pliers, and my IPAD in a taxi.  I WAS SO PEEVED.  Multiple phone calls later, no bag, and I had to reorder all of that stuff.  Oh, plus the GORGEOUS vintage fan I was about to restore.  I am still the most bummed about that.

After that crisis… I made a wire form for the high portion of the wig, and then handsewed individual braids to it.  You’re thinking this sounds like it took a lot of time.  Yep!  I finally had to give up and accept that the back would be covered by the veil (a length of silk/metallic organza), and just bobby pin/roughly sew the braid ends down in back.  The headdress was made from various jewelry findings from Fire Mountain, plus a vintage Indian bullion applique.

So that, plus some custom-made fangs (yay!  I’ve wanted some forever!) and jewelry, and we ended up looking like this: I also managed to talk my husband Michael into coming (he loves Halloween, but the last few years he’s flaked out on this event).  To join in the group, he wanted to go as Renfield:

I told him I could make his straightjacket for him, but he’d have to iron all the pleats into place because I didn’t have time to do it myself.  He bought the fabric, dyed it, and did all the pleating, and then I draped the straightjacket and hack sewed it together (thankfully it didn’t need to fit well or look well made!).  He then spent hours distressing it in the backyard while I napped!  Karen helped him achieve crazy hair, and he looked pretty great even tho we weren’t able to find him any good glasses: Beyond that, we had Jenn as Mina in a gorgeous red bustle ballgown that she banged out the week before the ball, Karen as Lucy in her orange wafting-through-the-garden ensemble, Paul as young/hot Dracula, and Liam as Van Helsing.  All in all, I’m impressed what we came up with, and bonus — I think the colors on the singing group worked really well together, three of us in ivory/gold and the other two in orange and red! 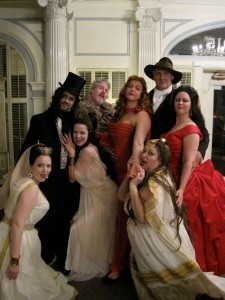 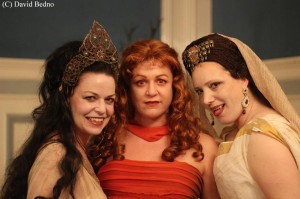 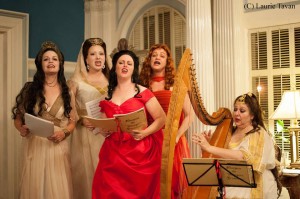 You can see all of my pictures from that evening on Flickr, if you’re so inclined.