This TV series, created by French & Saunders (a famous British comedy team; you probably know Jennifer Saunders from Absolutely Fabulous) is COMPLETELY HILARIOUS.  It’s set at Versailles in 1782, and Saunders plays the Comtesse de Vache (Countess of Cow), an AbFab version of an aristocrat who spars with her witty maid (Dawn French), hairdresser, and rival Madame de Plonge.  If you like historical humor, you will love this.  If you like AbFab, you will love this.  Nothing makes me howl as much as the opening 6 minutes of the episode “Murder,” when the Comtesse’s attendants leave her alone for two days, and she’s unable to get out of bed because — well, she’s an aristocrat! She can’t get herSELF out of bed!

The costumes are definitely theatrical:  I think all of the dresses have fitted backs, some of which are incongruous with the rest of the dress; some of the fabrics are weird; and there are some non-18th c. aesthetics, like skirts of a different color than the bodice.  That being said, I really quite liked many of the costumes!  The wigs are great, it LOOKS like they used silk for many of the dresses, and sometimes a character will step out in something that will make you say, “Wow, I think they based that on a real historical garment!” See Marie Antoinette’s dress below, and the Comtesse de Vache’s blue & white jacket ensemble (okay the pockets are weird, but otherwise, I quite like it!).

I can’t recommend this highly enough!

If you like this era, you might also want to check my 18th C. Costume Movie Reviews.  For more silly takes on history, check out Casanova (the David Tennant version), Lost in Austen (2008), and The Young Visiters (2004). 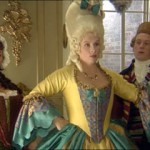 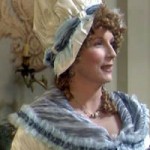 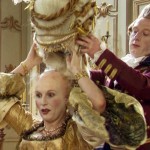 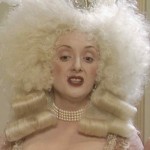 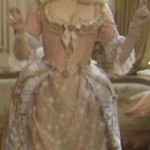 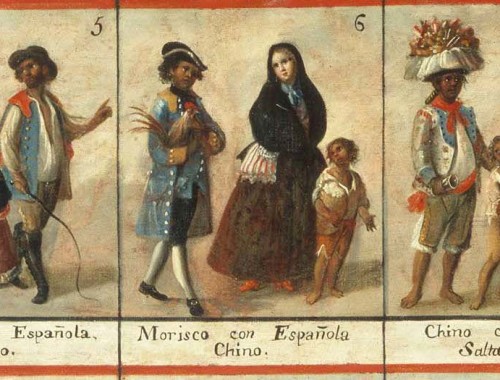