Costume College happened!  It was fabulous, minus the technical difficulties that happened during my class!  I promise to post about it soon, but while I’m getting mentally organized and waiting on photos…

I’ve decided to focus on two things this coming year:  18th century hair, naturally, because of the book project.  So I plan to blog about that topic.  Also, however, in my infinite wisdom, I decided that I want to make an 18th century French court gown for next year’s Costume College gala.  It’s something I’ve wanted to make for forever, so I’m finally going to make it happen!

For now, I just wanted to throw out the idea — I’ve already managed to rope a few people into joining me — and call dibs on my dress: 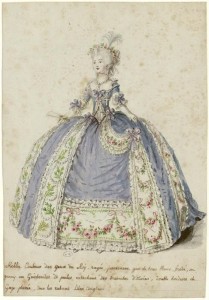 So, expect a number of posts on court dress this year!  By the way, my interest is in French court dress.  If anyone wanted to take the lead on putting out info about court dress in other countries during this period — or hell, any period — I think that could be really interesting!