I was all set to start on my 18th century court dress, which IS happening for this year’s CoCo gala. (Are you still in? I hope so!) I was fiddling with a bodice pattern, and I had my copy of Norah Waugh’s Cut of Women’s Clothes open to the sneaky 18th century bodice/corsets page. See, there’s a weird section that’s separate from the 18th century patterns section, which has some interesting stuff: some riding habit jackets, 2 corsets, and 1 bodice. It’s weird, because why aren’t those corsets in Corsets & Crinolines? Why is this stuff separate from the other patterns? I don’t know, except that Norah Waugh is sneaky.

Anyway, I had it open to that page because one of the patterns is for the probably-a-court bodice that probably belonged to Marie Antoinette. You know, this one. And I started staring at one of the corset patterns, which is a 1790s corset that belonged to Lady Hamilton. This is interesting to me, because Lady Hamilton packed on the pounds in later years. And I don’t know how curvy she was in the 1790s, but her corset has a flared front. Meaning, these stays don’t have a CF on the straight grain, but rather flare forward to accommodate the bust. Confused? Check out Mouse Borg’s blog post for her recreation.

This got me thinking. My current pair of 1780s stays either need some patching or just to be remade. And I feel like I’m always wrestling with getting a good fit. Maybe part of my problem is that I’m just not leaving enough room for the girls.

THEN I was looking at Merja’s fabulous, drop-on-the-floor-and-writhe-because-you’ll-never-be-that-good pair of 1780s stays. Now, she is much smaller busted than me. But I was noticing that her fit is much better than mine around the side bust. The tab where the strap attaches is actually used to cup the side of the bust. Mine sort of sticks up into space. Now, her front is cut down pretty low — shift or no shift, my girls wouldn’t be controlled with stays cut under the bust point. But it got me thinking that I needed to play with the fit in that area.

So the end of all this was a revised stays pattern, with a front flare, slightly lowered front, and front tab moved to better cup the side of my bust. And when I went to tweak the pattern, I pulled out the original I based it on. And, I remembered that it had a center front gore, which I omitted because I was making mine CF opening and thought the front needed to be on the straight grain. If you attached that gore to the front piece, you’d get a curved shape, just like Lady Hamilton’s corset. *thumps head*

Here’s a new mockup. Now I just need to order some coutil and get to sewing! 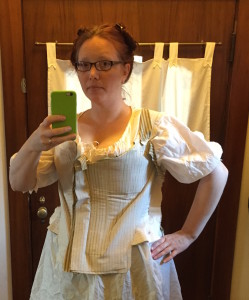 Front. The sleeve tab has been moved slightly, the CF has been flared at the top, and the neckline has been dropped slightly. 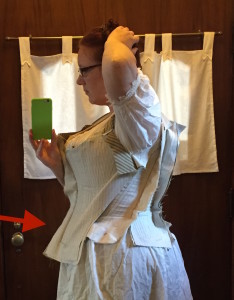 Side. MUCH nicer bust silhouette. Still need to figure out how to push that belly in where the red arrow is. I’m considering putting a busk in, in a separate flap that will lay under the CF when laced closed. A modern approach, but what else can I do with a CF opening? (I refuse to make someone else lace me every time I dress). 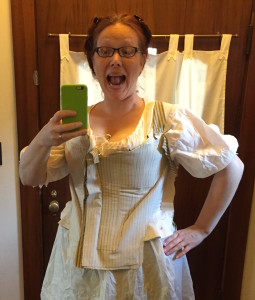 This is how out of practice I am at doing costuming selfies. I had to take one pic with fear face.