So I mentioned in my last post that I’ve been doing some sewing… Although work has been busy, I’ve also been enjoying the fact that I have no looming deadlines for any sewing projects, so free time plus limited energy means I’ve been working on some noodle-y stuff.

You might remember when last year, my fabulous friend Francis made me some handmade reproduction Elizabethan shoes.  I’ve been wanting to gift him back, but of course he’s a costumer too, so have been trying to think of something I can make for him that he can’t make for himself.  We figured out that he doesn’t do embroidery, so I am planning to make him an 18th c. hand embroidered waistcoat.

I have dabbled at embroidery and I know it’s one of those things I can do, it just takes a lot of time.  I’ve been wanting to learn to do tambour embroidery for years, so decided that’s what I’d do on his waistcoat.  But since the waistcoat is supposed to be a gift, that means I shouldn’t be experimenting on it!  So I thought I’d better to a project for me as a learning experience.

To that end, I decided to make a hand-embroidered 18th c. fichu using tambour.  I’ve had some REALLY fine white linen in my stash for a while, which I’ve been using in small pieces for special elements, as I have no faith in ever finding linen this fine again.  I have Peri’s tambour frame on long-term loan, so all I needed was a tambour needle, the right thread, and some instructions.  I got the needle and thread from Lacis, and then read through the books Tambour Work

to learn the technique.

I ended up using a pattern from the 18th C. Embroidery Techniques book, as it helpfully includes a pattern for a late 18th c. tamboured fichu from the (Bath) Museum of Fashion.  I don’t love fichus that bunch up around the neck, so I decided to follow the cut of this fichu at the Met to hopefully avoid that.

So far, so good!  It’s certainly taking time, especially now that I’m done with the long continuous line things and am on the 5 million individual flowers, each of which needs to be done separately from the others (as I’m trying to keep the back of the embroidery neat).  The one thing that’s stymied me are the little dots, which on the original pattern are tiny spirals… there just isn’t enough embroidery to bring the tails through on the back, so I haven’t figured out whether/how I’m going to include those.  I could of course NOT cut the thread off between dot/spirals, but then I’ll have all those extra bits of embroidery thread on the back of the work… 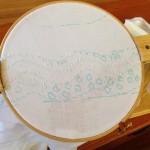 Over fall, I worked on a tambour embroidered fichu, which is nearly done (but not quite). 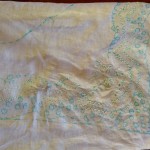 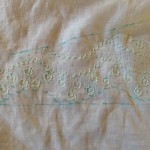 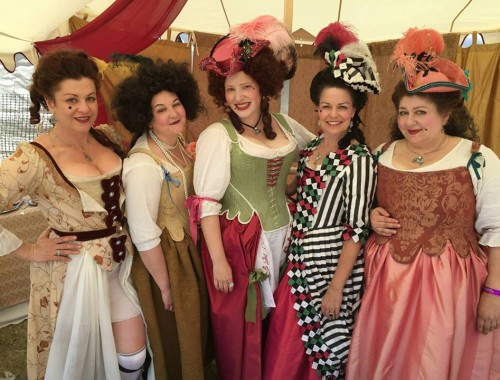