So I’ve actually been working steadily on handsewing the new stays.

First, fabric:  I have enough of the red silk damask to make another pair, but what’s the fun in having two identical pairs of stays? So instead I’m going with this green silk damask that I found on Fabric Guru (my new favorite source for small lengths of nice fabrics).

For the linen layers, I’m using one layer of natural linen canvas, and two layers of linen/cotton fustian, all from Burnley & Trowbridge.  Sadly I didn’t have enough of the linen canvas to do two layers, but I was looking at Costume Close-Up (I think?) and the stays in there were made of 3 layers of linen, one heavier than the others, plus top fabric, so I’m pretty happy with my choices.

I’ve cut out all the pieces, and basted them all together… and in so doing realize just how much a SLIGHT twitch of the angle of the needle can totally wonk-ify your sewing.  Eh, but it’s basting, right?

Onward to boning channels!  I’m starting with the side back pieces, as they were relatively uncomplicated.  I haven’t been doing much sewing at home, but I HAVE been sewing a lot on the train/bus, and quite enjoying it!  My handsewing has definitely improved as I’ve worked on these, because some of the first few rows that I stitched really look like crap.  It’s back to that slight-twitch-of-the-needle-angle thing, and this time it DOES matter because the boning channel stitches will show!  It’s NOT good when you look at your sewing, and think, “Crikey, did monkeys sew this?”  I did some picking out as I went, but tried to take deep breaths about it all and reassure myself that it’s supposed to not be machine perfect!

But, of course, once I finished one piece and my stitching had gotten better, I had to pick out the most egregiously bad sections — which ended up being about half of the sewing!  It’s not stressing me out, though, because I so enjoy hand sewing, and with life being so busy right now, this is just the perfect meditative release.  So, I’ve been going back and filling in the picked out sections, and am making serious progress.  I’m now 95% happy with the stitching I’m doing — it looks like the not-so-perfect examples in Underwear: Fashion in Detail, and it doesn’t look like it was sewn by monkeys.

Here are some pictures which are unfortunately not the greatest… 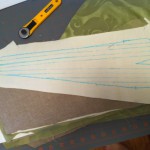 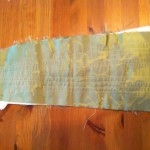 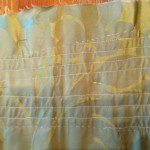 First try, closeup so you can REALLY see the monkey sewing 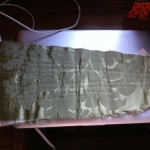 Leave a Reply to another Katherine Cancel Reply