There’s been NO sewing since the vampire dress last fall. Mostly because WIGSBOOKWIGSBOOK, but also because WIGSBOOK turned my sewing room into a STY the likes of which it may never recover from. Seriously. I go in there to get something, then run out and shut the door because I have The Fear.

Nonetheless, there have been a few dress up occasions over the past 6-8 months:

I went to GBACG’s Bal di Carnivale, which was a FAAABULOUS masked 18th century dinner. Since the theme was 18th century masquerade, I wore my fancy dress Maja costume, with my 1938 Marie Antoinette wig, and a black and silver harlequin mask. The wig was a last minute idea — I was stressed because I had no time to make anything for myself, but given the WIGSBOOKWIGSBOOK, how could I show up at an 18th century event in a crappy old wig? All of my current red wigs have seen better days, and frankly, they’re just not up to par even if they weren’t looking ratty! I was so glad to realize the white wig would work, and I think it really added to the ensemble.

Francis and I were asked to perform a minuet, something that I learned how to do about a year or two ago. It has been a life dream to learn, and we performed it at a Lumieres dinner and again when we were in France. I said sure, then when the day of came got super grumbly as we were last minute scrambling to remember the steps. But then when we danced it, it felt super magical, and I was so glad we did! 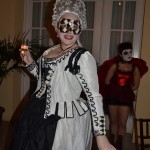 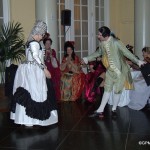 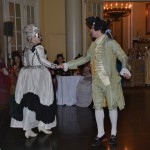 A month or two ago, Bella Donna performed at the San Jose Fantasy Fair. This was our second time at this fair, and it’s a lot of fun — almost all the audience is little kids, and we play crazy-in-a-good-way OTT princesses. I wasn’t in the mood for a complex costume or big hair, so I ended up doing a riff on last year’s Pirate Fest 18th c. outfit, but with super princess-y hair, with a braid around my head and long curls on one side. And a ton of flowers and ribbons, to dress things up. We had a great performance — we do a ridiculously silly show that is essentially a mash up of Cinderella and The Bachelor. And in our space, we had a tea party set up for little kids, which was SO cute — kids just knew it was for them, marched right up, plopped down, and started playing tea party. 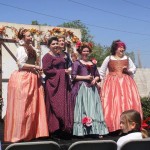 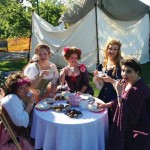 And finally, I went to a Lumieres 18th century dinner, which was lots of fun. I was nearing the book finish line, so I wasn’t in the mood AT ALL to wear anything complicated — so I wore a black striped 18th c. jacket that I banged out a few years ago and have never managed to blog with a white cotton, embroidered petticoat. I threw together a new wig, which I ended up powdering because I ran out of time to dye my hair! I don’t have any great pics, but here’s photographic proof: 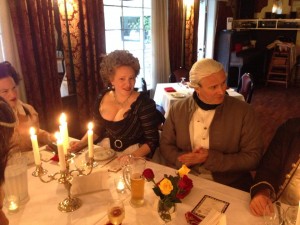 Oh, and I almost forgot! I went to a semi-interactive theater performance set in a 1920s speakeasy. I dressed up in a modern, slightly faux-1920s silk charmeuse dress with a pretty flower printed on the lower portion, and a vintage 1920s black silk satin evening coat — and the repro Great Gatsby bandeau. And my husband went, in a modern suit as he doesn’t have anything 1920s! 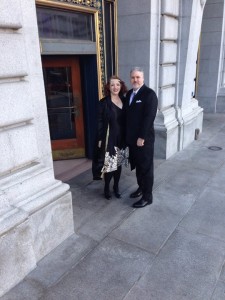 The Return of the Hand Sewn Stays!