(Note: I am catching up on all the movie reviews that I’ve been needing to post!  There will be more reviews coming!)

A few months ago, somebody asked if I took requests/recommendations for movies to review.  I wasn’t organized enough to respond at the time, so this review is my response, as it’s one of you who recommended it!  I totally missed this British miniseries when it came out, and I confess, the title conversely made me think of cranky Puritans and boring giant-white-collar butter-churny dresses…

I was wrong!  This was GREAT, and the costumes were gorgeous!  Andrea Riseborough stars as the fictional English aristocrat who is a part of Charles I’s court and then is caught up with Oliver Cromwell & Co. during the English Civil War.  Sure, it’s awfully convenient that Angelica happens to be involved with all of these key people, as well as different events and movements of the period, but hey, that’s the fun of good historical fiction.  She starts off young and somewhat unsure, and over the course of many trials and tribulations finds A) love and B) herself… and Michael Fassbender plays her love interest, which:  RRRRRRRRRRRRRRRRRRRRRR!  Dominic West plays Cromwell, and while West can be attractive, he’s definitely not in this!

The costumes were gorgeous, with Riseborough in various beautiful 1650s-60s-esque dresses.  They did stick with basically the same dress cut throughout the film, which ignores the developments of women’s styles over time, and they definitely needed more petticoats under the gowns.  Okay, and sometimes the off-the-shoulder was WAY too off-the-shoulder.  I don’t know enough about men’s costume of this era to be able to say whether it was accurate or not — it certainly looked good to my eye, but maybe you can tell me more!

If you like historical fiction (and I do), you’ll like this.  So, a big thank you to whoever recommended this miniseries!

If you like this era, you might also want to check my 17th c. Costume Movie Reviews.  I specifically recommend the following shiny 17th c. costume movies:  The Last King (2004) and Stage Beauty (2004). 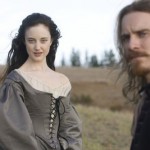 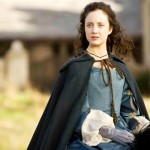 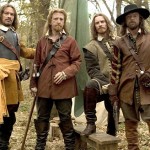 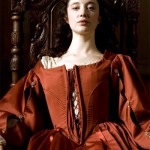 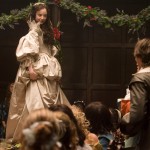 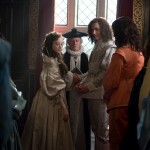 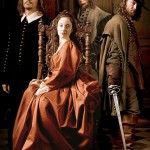