I have a particular connection to the history of the circus, as my father’s family were circus and vaudeville performers in Germany, England, and the US during the 19th and early 20th centuries.  So I may be biased in enjoying this story based in the circus of 1930s.  Robert Pattinson is actually relatively good as the veterinarian who, when his life crumbles, runs away and becomes a circus vet.  Reese Witherspoon is the star performer who, in gorgeous costumes and with faaaabulous hair, does a beauty act with elephants; Christoph Waltz is her anger-management-issues/abusive husband who owns the circus and so has a hold on everyone’s lives.  Of course, Pattinson’s and Witherspoon’s characters fall in love, and tragedy strikes, as you might expect.  It’s not a revolutionary story, but it’s good, and it’s an interesting milieu in which to set a film.  And Uggie (the fabulous dog from The Artist) is in it!!!

The main focus of the costumes are of course on Reese.  She has beautiful sparkly stage costumes and a great casual yet chic 1930s wardrobe.

The only real down side is that after the film’s release, it came out that the trainers may have abused the lead elephant from the film, which is really horrible. 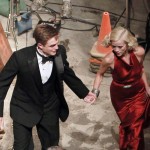 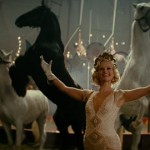 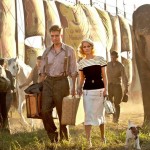 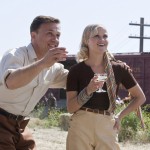 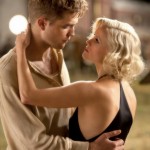 For all those making Titanic-era dresses…