Hey look at me, doing all this blogging!  I’ve been thinking that I will post costume movie reviews as individual blog posts, and then also cross-post them to the appropriate Costume in Cinema page for posterity.  That way, it creates a bit more content for this here blog, plus allows you to let me know what you thought of the movie (and/or my review).

Based on an 1880s French novel written by Guy de Maupassant… and if that doesn’t give you an idea of the tone of this movie, then let me summarize late 19th century French literature for you:  the people are pretty, but the emotions are BLEAK and will hammer you over the head with their BLEAKNESS!  My boyfriend Robert Pattinson is Georges Duroy, a poor Algerian vet who climbs the Parisian social ladder by manipulating various women.   Pattinson’s performance is better than you might expect, you Twilight haters, but there’s a bit too much grimacing instead of emoting; the three female leads turn in nice performances, but nothing that made me jump up and down.  It’s unclear just what Duroy’s charm over women is supposed to be, exactly — most men can’t stand him, but when he smile/grimaces at a lady (or brings her a pear?), she just keels over, which never ends up working out too well for her.  The costumes are very pretty and quite accurate — I think the opening title card says it’s 1890, but I could be misremembering — they perfectly capture that transition between late 1880s bustle and 1890s.  Lots of pretty sleeveless evening gowns with that vertical line, hair up on top of the head in that pre-Pompadour (except Thurman, who randomly has hair that is about a decade out of style).  None of the gowns made me jump up and down, but they all looked RIGHT, and that’s saying something!  Also, I kept hoping Pattinson’s brows were going to get shaped up as his lot improved, but no dice.

If you like this era, you might also want to check my Victorian costume movie reviews.  I specifically recommend the following late bustle/early 1890s costume films:  An Ideal Husband (1999) and Tipping the Velvet (2002). 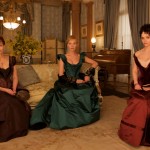 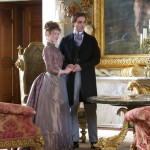 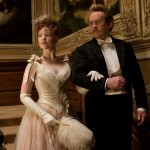 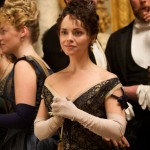 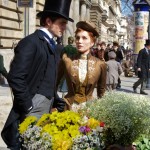 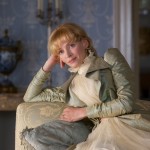