Researchers of 16th century English costume are probably familiar with Lucas de Heere’s sketch of middle and lower class London ladies (discussed here, higher resolution image here).  It’s an important source, given that de Heere is documented as having actually BEEN in England when it was drawn, and it shows the common people.  Most images depicting common people of this era are drawn/painted by people who may never have seen a commoner of whatever-country in their lives.  There are a couple other famous-within-the-costuming-community images by de Heere:  his images of Irish dress and his allegory of the Tudor succession.

About five years ago, I found some further images of Englishwomen by de Heere in a book on the Valois tapestries, but they weren’t the highest resolution and were only in black and white, which started me on a hunt to find more.  It turns out that he published a costume book with a number of images I’d never seen.  I found an online copy of a dissertation written somewhere in the Netherlands or Belgium which included all of the images, but the resolution was TINY.  So, every year or so I’d do some poking around and hope to find an online or print source with usable images.  And today I found it, digitized at the University of Ghent!

There’s a lot that’s in it that I think will be very interesting to 16th c. costume researchers.  The book is a mix of representations of historical and contemporary dress.  Some of the illustrations are probably pretty accurate, and some may be completely made up.  However, there are enough images that are likely to be correct to make it a great source for costume research, and importantly costume books like this often served as models for future painters (ie an artist needed an image of some French peasants to fill out his/her landscape, so they’d copy those peasants out of a costume book).

Here is a link to the bibliographic data on the book, and here’s the scanned PDF of the book itself…. and here are some individual images from the book that I find most interesting! 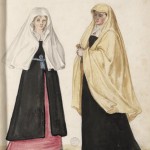 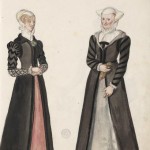 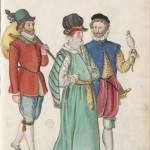 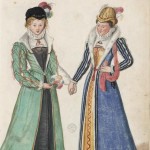 English lady and young lady – this one should be new to most of you! 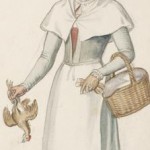 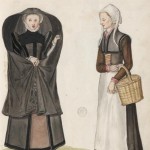 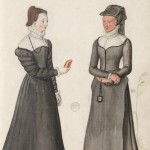 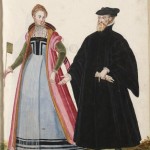 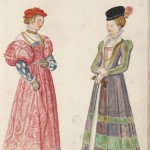 German lady and young lady – note I officially pee on the dress on the right! (ie I will be making this in the next few months) 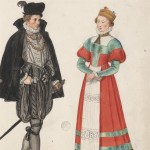 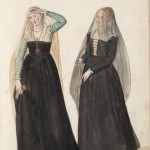