Lots of Progress, Not a Lot of Posting

Why?  Progress = because I have the week off from work (furlough)!  Posting = couldn’t find my digital card reader, which meant no photos… and I find photo-less posting to be annoying, because I want to SEE what people are talking about!  It’s a thing with me – I hardly ever post without photos.

Okay, so last time we talked, I was busy dyeing velvet.  I then made the collar facing, extending it down to where the bodice closure starts (you can see a tiny little line of velvet there in the film gown).  There was a little bit of futzing to get the collar points to mirror.

Then I made a sleeve mockup.  The sleeve is long, fitted, and pretty basic, with the velvet cuff.  I took the sleeve pattern from my 1875 day bodice and took out the elbow-wrist fullness.

In trying on my sleeve mockup, I discovered some weird, around the bust point but also above, fullness.  I think this was created when I let out the mockup at the center front — I think  things may have pivoted weirdly?  I fuzted with it for a while and then realized I was going to need to redo the darts, so I picked those out.  I ended up taking in a bit at the top of the side seam, and then repositioning/reshaping the outer bust dart.  Annoying, but in the end I’m glad because I like the placement of the darts better, and they look more like the film gown.

Next, I sat on the couch for about 2 days making buttons.  I used Hana’s tutorial that she posted in the comments on the last post.  I had to make 22 buttons, so it took a LONG time, plus Winston our dog ate one of them (luckily no swallowing!) so I ended up making 23.  The buttons are just decorative — squinting at the film gown, I don’t see any sort of loop.  My plan is to use hooks & eyes on the inside of the bodice.

I made up the sleeve, but I haven’t attached it yet, as it’s easier to do all the bodice finishing with a bit less fabric in my lap.  I had to look at the film images a lot to convince myself that the sleeve cuff really was higher on the front seam than the back, which seems counter-intuitive… but I went with it.

Finally, I’ve been thinking a lot about the white underbodice layer, and finally decided to make a chemisette.  I haven’t found any fashion plate images of chemisettes from this era (more 1860s-earlier), but it seems like the most obvious solution, and if I’m thinking historically, early 1870s isn’t THAT different from late 1860s.  I looked at patterns for chemisettes in Arnold and Hunnisett, making it reach down to the waist, with the turn-back collar and button front closure.  The proportions look slightly off to me — I think in the film gown, the collar opens lower — but if I do that on me, I’ll have cleavage, which doesn’t seem right for 19th c. daywear!  Romola Garai does not have the rack that I have.  I finished the chemisette last night with lace on the collar and buttons and buttonholes – but no pics yet!

Now, I need to get over to Lacis for boning, attach the sleeves, and add hooks and eyes.  Then it’s on to the hat, which I’m super excited about!  I bought Lynn McMasters’ Mid-Victorian Bonnet, and I can’t wait to start messing with buckram (altho choosing the trimming may kill me — but that’s another post). 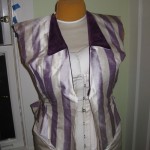 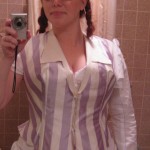 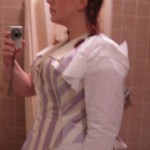 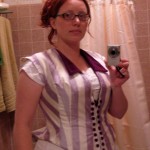 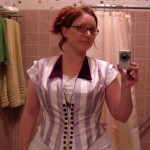 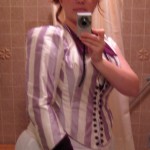 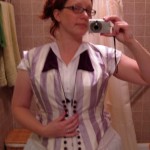 I Am Very Good at Lagging