It’s Been a CADDy Weekend

And it’s only going to get worse!  Here’s one of only two not-on-my-must-accomplish list (bad Kendra!  Should work on “must do’s” before “like to do’s”!) I’ve been noodling on this weekend:

There are a couple of 18th century events coming up:  GBACG’s Duchess of Devonshire tea which I am co-organizing (popular enough that it looks like we’re going to do a second event the following weekend!), plus a Lumieres event.  I’ve been wanting a 1780s tall crown hat for a while, and in order to resist the urge to make a new dress or jacket (which is a LOT of work), I’ve been channeling my energy into accessories.  Which is really a good thing, because I have TONS of plans to make accessories and I never get around to it because I get stuck in the mad rush of “MUST HAVE SOMETHING NEW” (which invariably takes waaaay  more time than making accessories, and means I never get around to said accessories!). 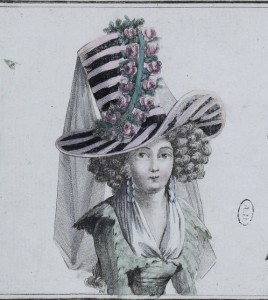 I’ve been wanting a 1780s tall crown hat for a while now — really, since I saw this 1787 stunner about a year ago.  I’ll periodically trawl through my image morgue and every time I go by this it jumps up and hits me a couple of times and says, “RIDICULOUS STRIPES!  YOU MUST HAVE THEM!”

Today I randomly got a hair to finally make one.  I looked for more examples, so that I could see the various options.  Most of the images I have of this style, which seems to be definitely a late 1780s one, are from fashion plates — I know I’ve seen some paintings with this hat, but I can’t seem to find them on my computer!  I wanted to double check the proportions, as I started by using the ones in the fashion plate, and WHOA did it look ridiculous!  I remembered that there’s a similar hat in The Duchess, so that was helpful, and then I found this Vigee LeBrun painting which gave me a clearer idea.

Here’s the various inspirations, along with the pattern I came up with: 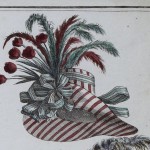 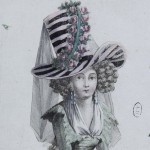 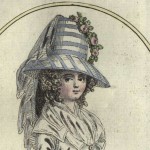 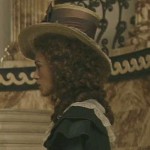 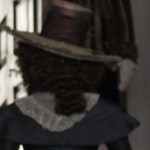 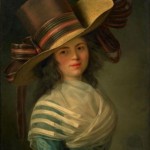 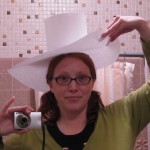 I messed around with some construction paper to make a pattern, basing the brim off of an Edwardian hat pattern that my fabulous milliner friend Lynne Taylor made for me (which one of these days I need to make!) — I made the brim slightly smaller.

I’m going to cover and trim it like the red & white striped hat in the inspiration gallery above, because I have some narrow red & white silk in my stash (left over from my stripey bustle dress) and my current theme is to Use The Stash!  I’ve got the covering fabric and flannel for mulling cut out, but I can’t get to the buckram until tomorrow as I need to pick up some supplies so I can double it.

Yay for stuff on my head!