So I am not performing at Dickens Fair this year.  Bella Donna did SO MUCH, particularly in September and October, and I need time to sleep, see my husband & critters, sew… you know, have a life!  I plan to gatelist at list one day to play scum, but I also want to go one day with Sarah and Trystan as customers to enjoy being shiny (and having tea! and stuff!). So while I could wear something in the closet, given that I have TIME — I think I’ll sew something!  And given that I only need to make a bodice, it’s not TOO crazy to add it to the sewing docket.

I originally bought the fabric for my 1870-71 evening dress meaning to make this dress from the BBC miniseries Daniel Deronda (hello fabulous bustle gowns, hello stripes!), and I even posted a tiny bit about it.  But then I got distracted, and made something else from the fabric, as one is wont to do!  But when I went to the garment district 1? 2? years later and the same fabric was still there in the same shop, well, obviously it was fate!

For reference, here’s the project page in case you’re wondering what the heck I’m talking about.

I grabbed my bodice pattern from my 1875 red & white stripey gown, using the ball gown front as that fit the best, although I still had to tweak it.  I appear to be slightly larger than my dress form right now (grumble grumble), but that only necessitated letting out the CF when I tried on the mockup.  I stared at the screencaps I grabbed a while ago, and rewatched the series while draping/drafting, and then cut out and sewed together.

Now I need to get to the fabric store (I’m hoping Stone Mountain will have what I need?) to get some purple velvet for the collar, cuffs, and buttons.  Speaking of buttons, those will need to be fabric covered buttons, but obviously velvet isn’t going to fit in those covered button form kits, so I’m thinking I should make my own – any tips?  And I’m thinking of basically faking the white blouse layer with it just being slightly wider than the opening, so that I can tack it in (I THINK it has a CF closure?  I’ll do that with tiny buttons or something).  The alternative would be a chemisette type thing, which sounds annoying. 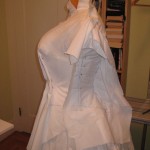 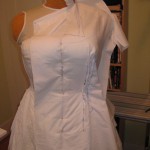 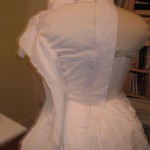 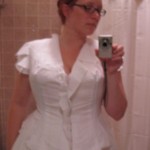 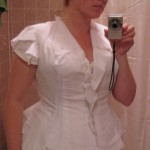 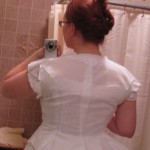 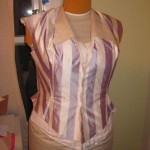 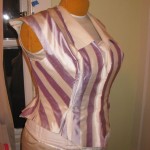 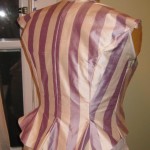 1910 Wings of the Dove Afternoon Dress