It’s taken me a while to pick this back up again, even when I knew I only had to do a relatively easy fix.  Lethargy and CADD are to blame!  If you’ll recall, I’d put the basic dress together and all the lacing holes, and had Scary Mooshy Boob.  I let out the CF lacing as far as necessary to achieve Relatively Normal Boob, then put a piece of paper over me and traced the opening shape.  Then I cut that in half, and made a pattern for a small gusset to go in the side seam.  I put that in and it seems to have MOSTLY dealt with the problem, so since this dress is all about being good enough for government work, that’s done!  I am getting some horizontal wrinkles around my waist, particularly in back, but I’ve decided I’m just going to live with that.  I’ve got one front gusset that’s pulling — I did resew it, trying to create a bit more seam allowance, but it’s pulled again.  Harumph.  I will have to rip out the top of that gusset and try some fray block or something!

I also took some scary flash photos of the full length of the dress, just so you could see the skirt. 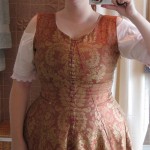 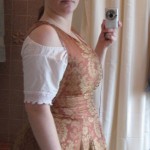 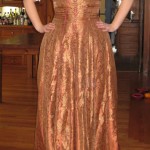 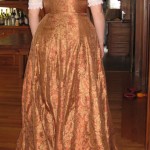 Even though I was sidetracked by Halloween