Even though I was sidetracked by Halloween

I’ve been busy assembling things for this project.

The first big one was finding enough white silk taffeta for all the trimming. I’d finally settled on ordering from Silk Connection because they had the best prices, but of course stupidly didn’t order a swatch first, and the silk came back noticeably more of a natural white than a bright white (anybody want to buy 5 yards of natural white silk taffeta?). So I hauled myself down to Thai Silks and went through their remnant bins, which aside from the hauling factor worked out well because I got 6 yards for $30.

So now that I had the fabric, it was time to start on the trimming. A few nights ago I started marking and cutting out the strips of fabric to make the three pleated rows around the underskirt. I have a nice pair of pinking shears that I inherited from my mother but which probably haven’t been sharpened since 1975 — I’ve never made the investment in another pair because I kept thinking I could get these sharpened, which I finally did at Costume College — but I don’t know if they’re just dead or if the sharpener sucked, because I was able to cut out about one row of fabric before the teeth just started chewing the fabric.

So! New pinking shears needed. I’ve admired those pinking/scalloping blades for rotary cutters for a while, so I went to crappy Joann’s today to pick some up. But noooo, Joann’s only carries replacement blades for Fisk rotary cutters, not Olfa which is what I have. So now I need to find a Michael’s and hope that they have what I need.

So since I was stymied on the trimming front, I sat down tonight to watch scary Halloween movies and sewed hooks and eyes on the two skirts (which as we know, should really take about 5 minutes but in reality takes about 5 hours).

Next I decided to finish the overskirt by marking the poufs (finally picked up some white twill tape — I just don’t think black would cut it). I basically followed the pattern’s markings, except that I added a third row of attachment points as I don’t like the look of poufs at the top and then a bunch of straight fabric.

The skirts aren’t fitting my dressform at the waist because I left my Victorian corset at work after our Halloween party — but you get the picture. 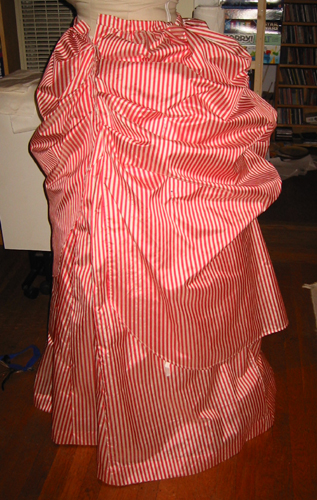 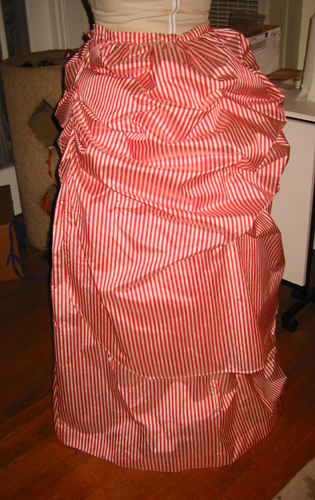 Speaking of dress forms — my Uniquely You is adjustable in height by a little plastic ring that fits around the pole of the stand. The ring has screws, which means you move the ring where you want it, tighten the screws, and then the ring holds up the form. But my ring cracked and broke (hello crappy plastic!). Now I remember someone telling me that the same thing happened to them, and they contacted the manufacturers who sent them a snappy replacement METAL ring — but I can’t find the contact info for the manufacturers! I did some web searching but came up with zip. Anyone know who makes Uniquely You’s and how to contact them?