England Trip Report #2: What I Wore (and Made)

There was a mad rush of sewing to get ready for the England trip, naturally.

As previously posted, Michael’s doublet was nearing completion but he felt it was too tight.  I thought about piecing in a gusset in the CB, then realized that would just get wonky, so I literally took out the whole back and remade it.  Ugh!  I know I could have made him suffer, but I wanted him to be happy.  I really wanted to make him a hat, and bought the pattern and everything, but the timing was just too tight.  Maybe if he ever wears it again!

Final photos – and by popular request, a ruff (okay, some ruffled eyelet lace) for Sir Winston: 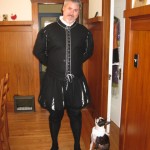 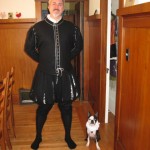 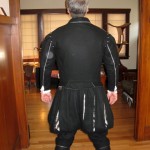 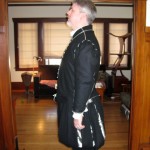 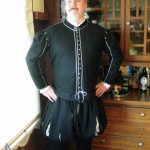 For me, the big project was a c. 1780 robe à la polonaise, which I took pictures of while I was making but totally neglected to do a dress diary… the reason for which will need to be another post! It’s made of red and white printed cotton (a duvet cover from Ikea), trimmed with red taffeta (which was supposedly silk when I bought it in the $7/yd silk taffeta garment district madness, but when Sarah burn tested her fabric, she reported it was not silk – bastards!), and yards of white organza ruffles.  I handsewed most of it, except I hemmed and gathered all the organza ruffles on the machine (hey, I’m not crazy!) except for the bottom ruffle on the petticoat, where the ruffling would show… and I ran out of time, so a lot of the sleeve was done on the machine.  I’m really pleased with it, especially the fit — I’m tired of always being the boobed wonder when I wear 18th c., so I made the neckline pretty cover-y — it might even be TOO narrow, but I’m not changing it now!  I do still need to add some braid to the back seams, but I can easily get that done before Costume College.  I’m thinking I’ll wear this to the Gala unless I get a wild hair to make something new… but that’s another post, too!  I promise to do a full write-up on the dress at some point, but again, more on this subject in another post.

I also remade my 1780s capote to have a poufier top (ie remade it in a couple of layers of silk organza), and retrimmed it as the green scheme made the outfit Christmas-y (I figured blue was complimentary without being matchy).  I used a vintage feather trim that I got at Costume College a few years back.  Finally, I wore the lace knitted mitts that I’ve been working on for a while – a totally modern pattern, unfortunately, as the only period patterns I could find were very butter churn-y and winter-y. Finally, I did widen the neckline on the medieval gown — it was a rush job the night before we left, so I just put the dress on inside out, marked a wider neckline, cut some bias silk and finished it quickly.  I was worried it would stretch out or do something funky, but it seems to have worked!  I have a LOT of bust in it, but otherwise it turned out to be prettier than I’d thought and I had fun swanning about in the bluebells in it. Oh, and I wore my green Venetian, but that’s very this-old-thing to me these days!