The conversation on my movie review of Amadeus sparked an interesting discussion about early inspirations for costuming, and Lylassandra said, “I would LOVE a blog post about which movies (and other experiences) first inspired your love of costuming.” I think the “other experiences” is worth chatting about, but that’s enough to be another post… but sure, I’d love to yammer about early costume movies!

Of course, the first thing I did was go through my movie reviews and some online lists of costume movies to try to remember which ones had an impact on me. I’ll confess right here that I was born in 1974, so I was probably too young to see Amadeus or Dangerous Liaisons when they first came out.

The first thing that came to mind was all of the not-quite-there inspirations, so the beginning of this post might seem a little flimsy, but then I’ll get to the knocked-me-over ones at the end, so stick with it!

For sure, Gone With the Wind was an early one. I remember my mother buying me a VHS boxed set, and I definitely watched it a number of times. I remember LOVING the huge crinoline skirts, but being frustrated by all the short sleeves and weirdly 1890s elements in what should have been the bustle years. And I was too young to think Rhett Butler was terribly attractive (he just seemed kind of greasy), and I thought Ashley was super annoying. So it was always a less than satisfying watch! I will say that I hadn’t watched this for years, when about a year ago our local art deco movie theater showed it. I went to see it and apparently I am now the right age to appreciate Rhett Butler, because HOT DAMN! I was swooning! 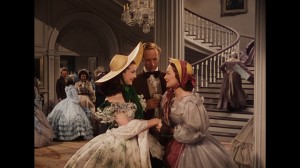 I’m sure I didn’t see My Brilliant Career (1979) when it first came out, since I would have been about 5, but I must have seen it when I was relatively young because it is one that has always stuck with me… probably more so for the extremely literate and fascinating main character, but also for her ugly duckling-ness. I remember being fascinated that she COULD go a different route… This is a movie I think too few people have seen. If you at all like strong heroines and complex stories, WATCH THIS. 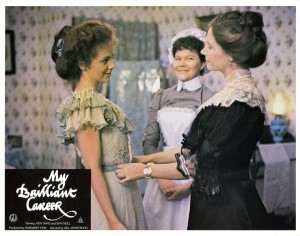 I definitely watched and rewatched Far and Away (1992) a number of times, mostly because it was a historical romance. I always thought it was cheesy, and I’ve always been irritated by Tom Cruise and loved Nicole Kidman. The costume era wasn’t one that really thrilled me, but again, romance! History! Costumes! Hey, I was just graduating high school…

Other ones I specifically remember are: 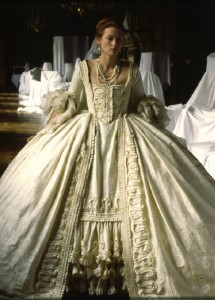 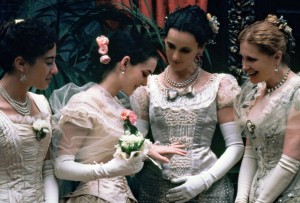 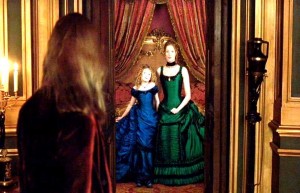 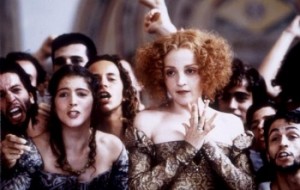 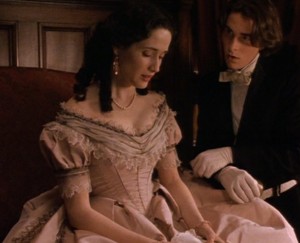 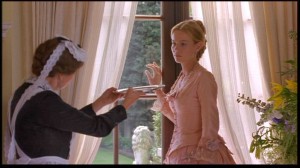 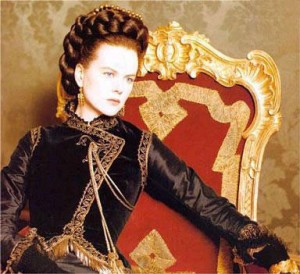 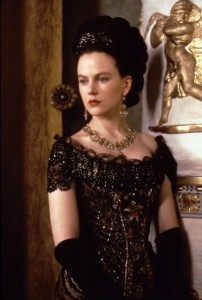 So what DID do it for me? What imprinted fundamentally on my consciousness? Hands down, it has to be Merchant/Ivory.

I saw Jefferson in Paris (1995) IN Paris, on my very first trip to France. I had been studying abroad in Scotland for a semester, and afterwards I did a whirlwind two weeks in Western Europe with a college friend. We arrived in Paris and relatively early on, wandered down the Champs-Elysees and saw posters for a costume movie, and I was sold. I remember LOVING everything about the French characters, but of course, the film tries (with only limited success) to explore some darker elements, and that limited success dampened things for me a bit. But dear god, the lushness of the costumes — not just great dresses, but great wigs! Hats (shout out to Mela Hoyt-Heydon, who I think made them)! Accessories! Amazing locations! It was an era I didn’t really know or have much chance to encounter, but probably my love of the 18th century dates from this movie. If only the movie had been focused on Maria Cosway, I think I’d die and go to heaven. Greta Scaachi is an amazing actress, and those shots of her in the Opera scene — just, whoa. (That’s a real fantasy of mine, going to the opera in 18th century costume, but of course I’d want everyone to be in 18th century costume!). I also think (looks-wise) that their casting of Marie-Antoinette is probably as close to the real thing as we’ll ever get. And I modeled my first Lumieres character on the small character of Adrienne de Lafayette (bottom picture). 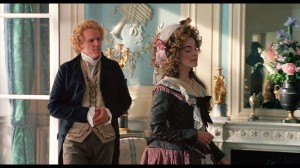 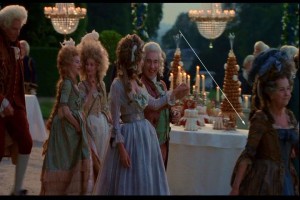 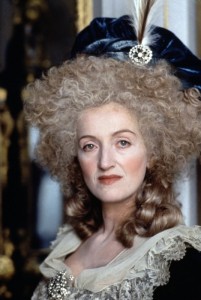 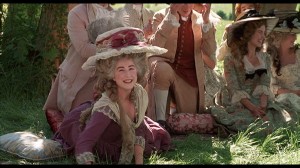 But more than anything, I think Howards End (1992) and, even more, A Room With a View (1985), were the early epitomes of Amazing Costume Movies. Particularly Room — I wanted (and still want) to dive into that world and just stay there. No matter that it’s not really a costume era that makes my toes curl, but it has Travel! Romance! Humor! Tweedy English locations! “Old world” Italian locations! Stiff upper lips! Intimate family scenes! I love so much about both movies as movies — interesting stories, complex characters, etc. But the costumes in particular were SO well done. They weren’t just gorgeous, they were gorgeous AND lived in. I felt like these were real people living real lives in real clothes, they hadn’t just grabbed something off the theater costume shop rack and put it on. The hair. The accessories. The underpinnings. The hats. The veils. I think it’s the casual day wear that gets me even more than the fancy evening stuff. I love seeing Charlotte walking in her suit. Lucy playing badminton in her blouse and skirt. Mom cutting the roses in the wind and being irritated by Charlotte. Cecil reading terrible fiction (is he not the epitome of PONCY?) while Lucy tries to ignore George. Charlotte and Eleanor sitting in the poppies, while Charlotte hints at some past amours in exotic Shropshire. Eleanor striding about Florence, taking no guff. Every time I go to Florence, I have to go to the various piazzas where they shot, especially the fountain where they tried to revive the dead guy. 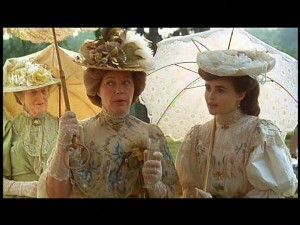 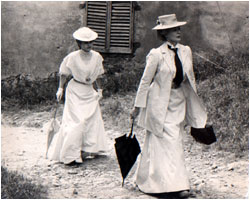 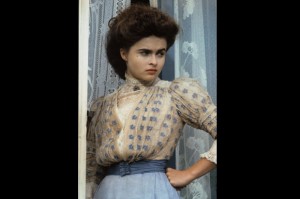 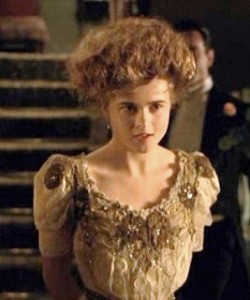 And now I can’t remember who it was, but I do recall bonding with someone when we agreed that we’d both tried to get our hair to look like the Italian girl who gets kicked out of the carriage: 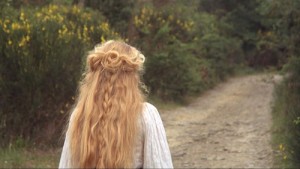 Howards End is also up there, although not quite as high (no Italy, no happy romantic ending). I adore the country locations in particular — the bluebells, the Howards End house itself. All the same things about the costuming grabs me — how detailed and ornate and yet lived in it all feels. This is an era that I do like more than the pouter pigeon, and Margaret’s engagement party and lunch suit in particular are the ones I love. Again, just a world I would love to dive into. 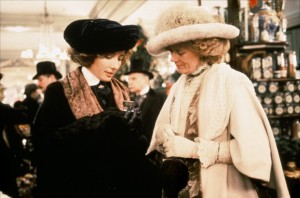 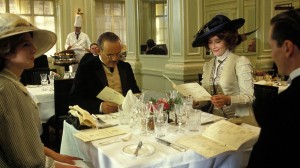 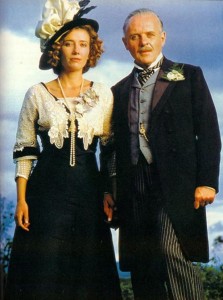 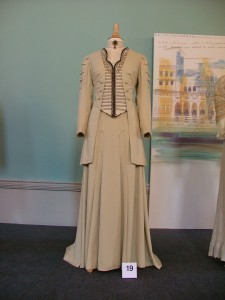 It’s funny, because Edwardian never was and (probably) never will be a key costume era for me. But seeing these worlds come to life so vividly, and seeing historical costumes that were really clothes, just blew me away.

So, what about you? What were the formative costume movies for you?