So I am forcing myself to go back and do a retrospective dress diary for this project, just for documentation purposes!

If nothing else, I’m glad I made it because it forced me to FINALLY make myself a new corset.  See, waaaaay back in college lo those many years ago, when I first started really getting into costuming, I bought myself a standard size corset from Amazon Drygoods, who resold Vollers corsets.  Vollers’ corsets are actually pretty nice — their base pattern was created by the company in the 1890s, so it’s actually a vaguely period shape, and they’re well made, with a REALLY nice feature whereby they include a separate 2″ish wide piece of boning underneath the center front busk, so it’s really supportive. At some point, that one shrunk* so I bought another one, because I was so happy with my first, and I was still at the point where the idea of making a corset seemed terrifying.

Fast forward a number of years, and laziness plus the fact that the corset still seemed to (sort of) fit meant that I never bothered to upgrade. I did start having acid reflux issues with it, however, which made me less excited about wearing Victorian costumes (of course, it took me years to figure out that it WAS acid reflux and not just instant-dehydration). Oh, and as the corset became less and less “sort of fitting” and more and more “barely fitting,” I increasingly got the dreaded Side Boob Cleavage. Ugh!

I’ve been meaning, for the last year or so, to get Jenn to make me a new Victorian corset. Not because it’s TOTALLY out of my skill set, but because I feel like I’m still learning about patterning corsets. Sure, I get how to pattern a corset, but the finer points – making sure the fit is perfect for THAT body – is still something I’m learning; and Jenn is a Master Ninja when it comes to that!

However, the idea for this project came up, and I’m broke and I knew Jenn was busy making her own costume for the Vampire Ball, so it was either keep on with the now-REALLY-doesn’t-fit-plus-acid-reflux Vollers corset, or make my own.  Something I realized making my 1780s stays is that I really never know how a corset fits me until I’ve worn it a few times. So I decided to make a working mockup corset, so that I could be more comfortable for this costume AND hopefully be closer to the final corset shape I’ll end up (which means I could maybe wear it with whatever mythical “final” corset is forthcoming) — plus, hopefully I could do something about the massive acid reflux.

So I hauled out my Jill Salen Corsets book and decided to work with the black & yellow 1890s corset. It was close to the 1880s shape I wanted, plus it looked do-able. 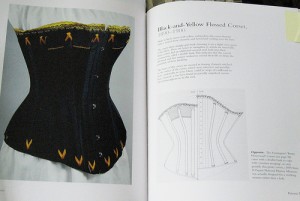 I started to look at Cathy Hay’s corset patterning instructions (more on that in a sec), but then thought, “Whatever, I know how to grade up a pattern!”  So I measured me, and I measured the corset, and I got to work… and made the corset pattern/mock up of ASS.  It TOTALLY didn’t fit, and I wasn’t really sure what to do about it.  So I forced myself to sit down and actually USE Cathy’s method, and let me tell you, WOMAN IS A GODDESS.  She’s got a method that actually WORKS, and it’s relatively intuitive, esp. for someone like me who is a draper/not a drafter and isn’t all anal and left brain-y.  I managed to make a pattern/mockup that fit ME relatively closely, and I was singing her praises (to the cats, natch)!

I did fiddle a bit with the pattern, in that I’m really trying to avoid too much waist constriction, esp. in front, in order to avoid acid reflux issues.  I’m still not sure exactly what it is that causes it, as I don’t get it in my Renaissance or 18th century corsets, but I got it up the wazoo with my old Vollers/Victorian corset.  Was it that it was too small?  Or was it that Victorian corsets are more fitted to the body throughout the waist-to-underbust area?  Not sure, but I tried to not constrict my waist too much, esp. in front, and then tried to do some nip at the side waist so that I’d have something of a nice shape.

I didn’t end up with the world’s perfect corset, but I did end up with a strong working mockup, which is what I wanted. Clearly it needs to be let out a bit more at the hip, and I’m not 100% positive I ended up with the waist in the exact right point, so I either need to monkey with it a bit more or hire Jenn to fine tune it for me.

I was happy to eliminate most of the side boob cleavage issue, although there’s still a bit — not sure if that’s entirely avoidable with a strapless corset, so I need to pick Jenn’s brain about that one too. I moved a seam slightly so that I could get boning where I thought it was needed at the side to push my boobs in toward the center, rather than flatten them back towards the chest. 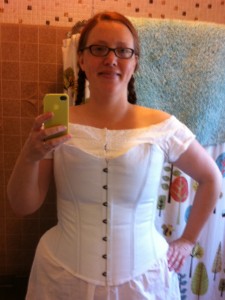 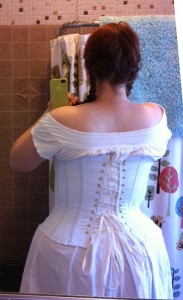 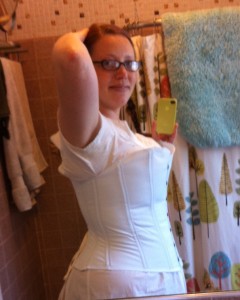 I’m glad I decided it would be a working mockup — it’s made of coutil without any covering — as I proceeded to set a grommet in the wrong spot, too high, on one side of the back. Duh, but luckily I can ignore that as this is only a mockup, right?

I also made a petticoat to fit over my bustle, since the skirt would have a shorter hemline and I didn’t have anything that length.  Nothing rocket science-y — I used the Truly Victorian early 1870s skirt pattern, as the fancy dress illustrations all seem to have fuller skirts than your typical 1880s dress would.  Bad photo courtesy of my cramped sewing room, which is currently in process of being shifted and reorganized for better usage of space, but more on that in another post! 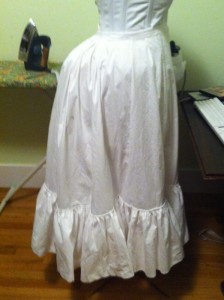 *Or I outgrew it. 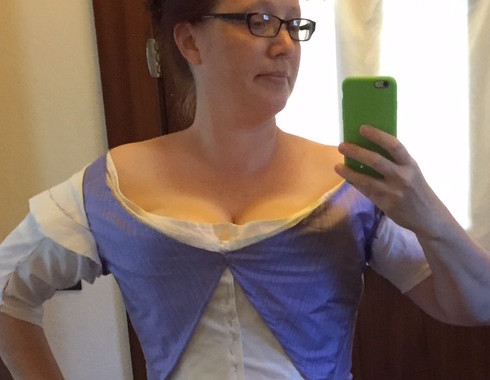