So I FINALLY got off my butt and scanned the better resolution picture that I have of the Maja portrait… and I’m really glad I did, because of course I am now finding little details that I missed!  Like, the black trim around the armhole has the occasional spangle on it!

Now, I am trying to figure out the buttons.  I had assumed they were all the same style, and were some kind of passementerie/thread wrapped button.  But now that I look at them in higher resolution, I see there are TWO different styles — one that looks like some kind of spiky, knotted? or passementerie? button, and something that I think may be a toggle… but then has some spiky-ness involved.  OR are they buttons and toggles that are laid on top of some kind of embroidery?  WTH?

I got the book 50 Heirloom Buttons to Make which is really great, hoping to find something in there that would look similar.  So far, nothing obvious… there are toggles, and knotted buttons, and thread wrapped buttons, and they all are similar, but nothing really close. 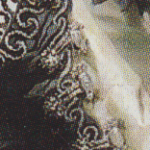 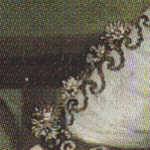