Or, peering at high resolution scans and trying to figure out wth is going on there!

So I am nearly done binding my new stays, but while I wait for a bit more silk ribbon to show up in the mail, I decided to get started on my big project for the summer:  the c. 1775 Maja fancy dress costume.  I’m going to drape the waistcoat, then it will be on to spangle embroidery land!  I figure I may switch off between draping further sections and what should be endless spangle-ing.

Here’s mockup #1 and 2.  I obviously worked a lot from the original painting, but also used this jacket from the Museo del Traje as a reference for the back.  I found a lot of paintings (like this Goya) that show even narrower back seams… but those all appear to be from the 1790s, so I thought this seemed more reasonable.

The hitch?  WTH is going on with the front?  It looks all fine and dandy, until you realize that there appears to be a center front opening closed with buttons and loops on the bottom half, but on the top half there’s a wide overlap that’s falling back!  So, uh, how does it close?  I poked around and none of the images I can find of extant garments from Spain in this era, or maja paintings, show anything similar.  The closest thing I could find was this 1777 drawing of a maja, which has an asymmetrical front flap opening — but that’s on the jacket, not the waistcoat!

Peering and peering at the original painting, I’ve semi-decided that the waistcoat must close center front, but then have a flap that overlaps near the top.  There is a button that’s sort of shadowed that COULD be in line with the other center front buttons, or maybe is further over and so could be the bottom edge of this flap?  The only other alternative is that the center front buttons/loops are non-functional, and the bodice overlaps really far over — but that seems impractical, as it would be hard to fit that wide of an overlap.  Right now, the overlapped top that I’ve draped is in a square shape, but it just occurred to me that it COULD be angled from the CF line up to the overlap (so more of a triangle shape).

What do you think?  How would you drape this sucker? 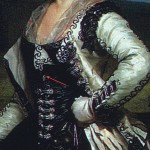 The button in question — above that is the overlap, folded back, that I’m talking about. 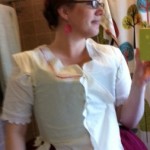 First mockup – close, minus some warbling along the bustline. 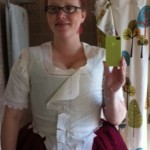 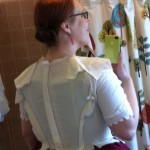 The back – this is the waistcoat, which will underlay the jacket, hence the round waistline.