So I’ve made a new resolution:  sew for an hour every weeknight.  See, I used to be really really good at this — just a little bit of work each evening.  But for the past few years, I’ve come home exhausted and just flopped all night, leaving most of my sewing (except for hand finishing) for weekends and holidays.  I really want to avoid last minute rushes and panics, so this week I started implementing this resolution, even going so far as to calculate what time it will be in an hour and holding myself to it.

And it’s been bearing fruit!  Not tons of fruit, as that’s not the point, but it’s meant that slow and steady progress is being made, where normally it wouldn’t be.

I’m also trying to be disciplined and stay focused on my must-do list and to ignore any more CADD — if I can get through my must-sew list, then I will be free to do whatever I want!

So I’ve been working on the sleeve pattern for my Gothic Fitted/Pre-Raphaelite dress.  Being totally new to this era, I mostly followed Charlotte’s clear and useful instructions.  She’s right about the shape of the sleeve head — my dress armscye measurement was WAY longer than my bicep measurement, and even though I thought I’d flared the top of the sleeve a bit, I still had NO arm movement possible.  I futzed through a few mockups, finally flaring even more at the top and making the sleeve head curve relatively shallow, and got a nice sleeve top with some reasonable arm movement.

However, I was also getting some upsetting elbow-region wrinkles, and Tasha’s article on the “elbow hinge” was super helpful.  I ended up pinning a tuck (sort of shaped like a fish dart) in the sleeve where the wrinkling was happening, then repatterned with a straight edge for the top, measured out the width of the fish dart, and took all that out of the curved top of the bottom part of the sleeve.  It’s by no means perfect, but it helped.

I think I ended up with the seam connecting the upper & lower sleeves too high, however — I marked in Photoshop where I want to lower it to (on the last picture).  I also want the hem of the sleeve to hit my knuckles, so I need to add about an inch there.  So probably one more mockup before the pattern is finalized.

The one other good thing about this slow & steady approach is that normally, I would have made the above mentioned changes to the pattern and then just gone ahead without a final mockup (in my impatience to just get to the real deal). But since I was done with my hour of sewing for that night, I could resist that impulse and do the sensible thing of one final mockup! 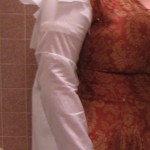 The sleeve cap is finally working, but the elbow wrinkling is not! Took a tuck to deal with that. 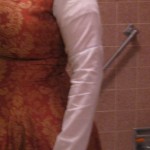 Two piece sleeve, with a seam allowing for the fitting around the elbow. 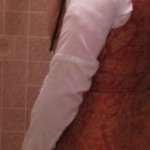 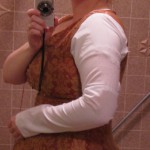 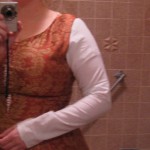 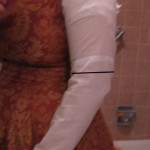 Where I think I should move the seam – opinions?

The White Queen – can we talk?