When Bella Donna performed at the Northern California Pirate Festival, we were excited to get a chance go 18th century and to have a bit more fun than we usually do. Courtesans in the 16th century are serious business; in the 18th century, “courtesan” has a slightly different meaning (note the addition of quotation marks!) — so we decided to go as tarts. We hit on the idea to use light colors in order to distinguish ourselves from all the red and black worn by most performers/attendees.

I wore my standard 18th century shift (to which I added a bit of lace at the sleeves), my peach stays, and made a fabulous stripey (in various shades of peach, red, and green) petticoat to fit over my side hoops. The best part was because I knew I’d be out in the grass/dirt, and only wearing this as a petticoat, I was free to use synthetic fabric (which I hardly ever do these days!) – which made the petticoat very cheap! It’s loud enough that it didn’t need trim, either, so it was quick to sew.

With it I wore a HA-UGE 18th century wig, which I made following this tutorial. Sadly, I am not a professional wigmaker, so it didn’t turn out as neatly as I would like, but it got the point across. I’m not sure if it will last for more than one wearing — I would like to try to redo it, but I’m not sure how to do it any more neatly. But I finally fulfilled my desire for Big 18th Century Hair, and that was exciting! [Note: see better experiments at my 1770s pouf tutorial page].

The hat is one of Jenn’s mini-tricorns, although all credit for the late night, 15 minute crappy covering job with a bit of fabric and some Fabritac falls on my shoulders. One of these days I’m going to spring for one of her fabulous custom hats! In the meantime, I’d like to trim this with some ruching or something to mask the messy job I did.

Add to it all as much jewelry as I could get on, a bunch of patches (again, credit to Jenn for making us skull-and-crossbones patches – whee!), and my red & white striped parasol, and you get 18th century tart-age! 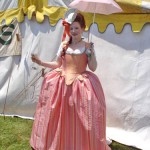 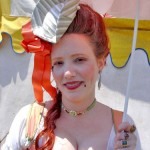 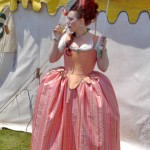