As I’ve had 18th century riding habits on the brain for a while now, with my upcoming trip to Colonial Williamsburg (or, as I termed it to Cynthia the other day, “18th Century Disneyland!”), I thought I’d share some images and research!  I do like a good image/source hunt, after all.

The best source that I’ve found thus far is:  Blackman, Callie. “Walking Amazons: The Development of the Riding Habit in England During the Eighteenth Century.” Costume, Vol 35, 2001.

Riding habits were long worn as functional dress, but in the second half of the 18th century, they became fashionable dress as well.  In addition to riding and hunting, they were worn for travelling, walking, visiting, and at home wear — in other words, informal day wear.

Stylistically, they tended to follow men’s clothing, and you will see cuts/fabrics/trims that are popular in men’s clothing show up in women’s riding habits of the same era.  One area that you’ll specifically see this in is the cut of the waistcoat, which has long “skirts” in the 1750s-60s, but a simple V front in the 1770s.

Habits were generally made by tailors (rather than mantua makers, who made women’s dresses), and thus were constructed like men’s wear.  According to Blackman, they “invariably buttoned left over right.”

There were a variety of sleeve treatments, including cuffs, flared end, and the mariniere sleeve.  Pockets could be functional or false.  Early styles had simple or no collar, while later on deep revers and high collars were popular.  Waistcoats could either be separate garments, or a false front sewn into the jacket.  The petticoat was cut simply, with pleats concentrated at the sides (1730s-70s) or back (1780s-90s).

There were a wide range of colors possible.  If it was intended primarily for riding or hunting, it was often red, navy, or green.  Habits meant more for fashionable wear could also be in other colors; blue, brown, beige, yellow, and even white were popular.  Fabrics were usually wool or a wool/silk blend, although there is a 1780s riding habit at LACMA that is in silk faille.

The wars of the 1770s made it fashionable to have a military look to one’s riding habit.  Red was increasingly popular (I assume modeled on the British army uniform?).  Habits were made to look like the uniforms of specific regiments.

By the 1780s-90s, women increasingly wore the redingote, which was styled on the Englishman’s greatcoat, although you still see riding habits pop up.

Habits were worn over “habit shirts” (see Nicole’s post for a great rundown of this style) and neckwear (cravats, stocks, or kerchiefs).  Hats varied by era; tricorns were worn by English/American women only in the first half of the 18th century (but continued to be worn by Continental women — see the portrait of Marie Antoinette from 1771), followed by jockey caps in the 1760s, high crowned hats in the 1770s-80s, and tall, cyclindrical hats in the 1790s. 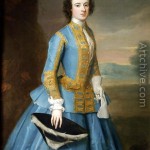 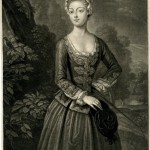 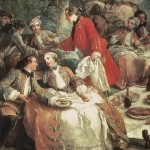 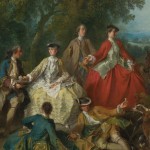 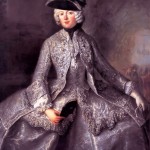 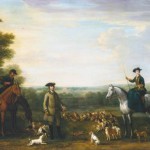 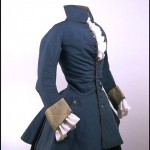 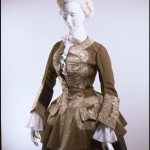 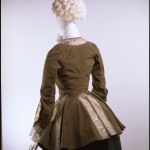 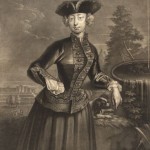 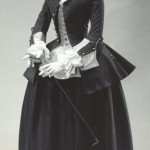 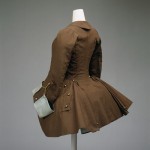 The same habit as shown in the previous image 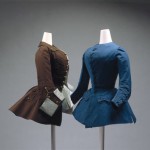 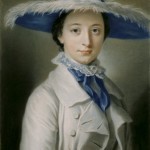 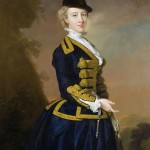 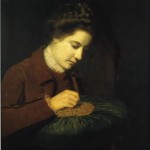 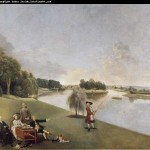 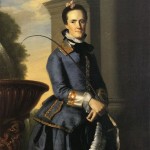 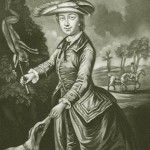 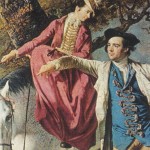 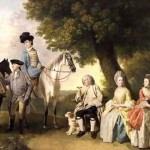